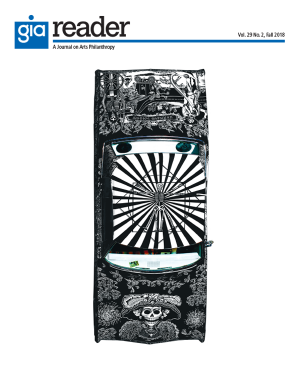 Special Note: Due to the leadership change and transition from Seattle to New York City, the 29th Volume of the GIA Reader included two volumes instead of the standard three, however, Vol 29.2 is presented here as a special double issue.

El Muertorider is a customized 1968 Chevy Impala dead lowrider designed by artists John Jota Leaños and Artemio Rodríguez. El Muertorider pays tribute to lowriders of the past and speaks to the racialized history of policing lowrider culture in the form of anti-cruising ordinances, arrests, illegal curfews, and the restructuring of city pathways that in effect removed this grassroots cultural expression from the streets. The car is part of the new media art installation called Imperial Silence, Una Ópera Muerta.

John Jota Leaños is an emerging new media and installation artist whose work focuses on the convergence of memory, social space, and decolonization. A Creative Capital Foundation grantee, Leaños’s work has been exhibited at international venues including at the 2006 Sundance Film Festival, the 2002 Whitney Biennial, the San Francisco Museum of Modern Art, Museum of Contemporary Art in Los Angeles, and Massachusetts Institute of Technology.

Artemio Rodríguez is a self-taught woodcut artist and printmaker. A Creative Capital Foundation grantee and a Kala Art Institute fellow, Rodríguez has had solo exhibits at Avenue 50 Studio, California, Librería Pegaso in Mexico City, and Galeria Sin Fronteras in Austin, Texas. He is the editor of several books including Jose Guadalupe Posada: 150 Years, published by La Mano Press, and The King of Things, a handmade book.

El Muertorider was supported in part by a 2006 Creative Work Fund grant for a collaboration between John Jota Leaños and the Oakland Museum of California.

Mapping Oakland’s Magic: A Benchmark Report on Grassroots Arts Organizations of Color
by
Vanessa Camarena-Arredondo, Ted Russell, Adriana Griñó
My Oakland
by
Stephanie Young
Love Poem To My City (poem)
by
Lucy Flattery-Vickness
Buried in Shells
by
Corrina Gould, Michelle LaPena
Mists from People as They Pass (poem)
by
Brenda Hillman
August 30 (From Blues City: A Walk in Oakland)
by
Ishmael Reed
Culture, Equity, and Cities
by
Vanessa Whang
A Praisesong for West Oakland
by
Marvin K. White
What More Do We Need to Cultivate a Just Society?: Conversion and Collective Action
by
Lisa Yancey
A Panhandler’s Last Request (poem): A poetic monologue
by
Joyce Lee
Arts Access: Messy, Hard, Oh-So-Worthwhile Work
by
Emily Smith Beitiks
Declaration (poem)
by
Tracy K. Smith
Toward Sustainable Cultural Infrastructure: Better Practices for Capital Projects
by
Katie Oman
White Trees (poem)
by
Nathalie Handal
My Oakland (Is Not My Oakland)
by
David Brazil
For the Black Men My Love Cannot Protect (poem)
by
Azariah Cole-Shephard
Opening the Eyes of the Beholder: The Need for Cultural Responsivity in Arts Evaluation
by
Suzanne Callahan
Supporting Hidden Talent: Investing in Teaching Artists
by
Beth Feldman Brandt
A Night in Oakland/Oakland’s Wild Vortexes
by
Jacob Kahn
Challenging Space Affordability: Community Arts Stabilization Trust (CAST)
by
Moy Eng, Shelley Trott
This Playground (poem)
by
Leila Mottley
My Oakland Is: Everything
by
Porsche Kelly
Dene Oxendene: Excerpt from There, There: A novel
by
Tommy Orange
A Burial Burn (poem)
by
Frank LaPena