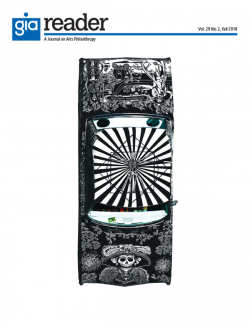 A Praisesong for West Oakland

The place where my mother met my father, West Oakland’s Esther’s Orbit Lounge, is long shuttered now. The cultural and social institutions that sprang up along Seventh Street made the moment feel like “Harlem of the West.” There is a storied existence in Oakland. It is buried over by unaffordable luxury apartments and gutted out of once black-owned row houses and Victorian homes. When I chose to be a writer, I didn’t know I was choosing to be an anthropologist, archaeologist, and hero. I didn’t know my work would be to surface, dig up, and rush into buildings earmarked as “blight” and slated to be demolished, to pull the poems and the stories out before they were reduced to rubble. Oakland has made me a better writer, a more compassionate writer, a radical writer, and a more sacred writer. I take great care and treat with much reverence the stories that come to and through me. I am born and raised Oakland: Kaiser Hospital, Peralta Year-Round School, Claremont Middle School, Skyline High School, Laney College, The Panther’s Oakland Community School for summer jobs, AC Transit, BART, the DMV, and the Kingdom Hall. My Oakland does not displace artists and spirit folk. My Oakland does not uproot stories that have been growing in front yards for years to make room for fences. My Oakland does not call the police on churches in full worship mode on Sundays. My Oakland does not turn a blind eye to cultural preservation. My Oakland would never turn its back on me, when it knows that I hold the truth of us. It is a trick of gentrification to have us believe our stories are at risk of displacement, so we should stop writing, stop dancing, stop gathering, stop worshipping, and stop making culture, because it is inevitable that it will be taken. My Oakland makes room in itself. Resorbs the blood, sweat, and tears of cultural workers. My Oakland creates resilient varieties of creatives and cultural movements that are ready to burst into bloom, in spite of the conditions that force us to lie dormant.

A Praisesong for West Oakland

My Acorn Projects God, what do you want this poem to do?

My Campbell Village Court God, who do you want this poem to expose?

The God of Cypress Village, who do you want this poem to feed?

Clawson and the Desert Yard God, who do you want this poem to free?

Here God of Dogtown, empower this poem to return a displaced people to their homeland.

Our Ghost Town God and Our Foster God, will this poem give a rapist pause?

The God of the Lower Bottoms and McClymonds, how can this poem make them resign?

The Prescott and Port God, how can a poem stop a multinational company from stealing our land?

Ralph Bunche’s God, will this poem’s family be left without a verse?

West Oakland is crying out to you! Write daily dead’s name into this poem God.

She is having her black children ripped from her arms by gentrification.

Make this poem a cease and desist letter to Chiquita Banana and Coca-Cola.

They say there was nothing there when they arrived.

Show the movement the inherent strategy of a poem.

They say West Oakland was Godless.

Show them that a poem prevents the conscription of boys into armies.

They pounced on foreclosed homes and erected fences as tall as Babel.

Put a poem to their throats and make them beg for their lives.

They hired police to keep us out God!

Make this poem the key witness.

Send them back to where they came from.

No poem should have to give up its youth to fight for its people.

Keep your promise God to every black family from Louisiana who moved to Oakland for a job.

Show that this poem is your medicine working. Your will being done.

Do not let them turn Esther’s Orbit Lounge into a Whole Foods when you know they will never sell a maw or fatback or lard.

This poem has given up pencils in solidarity to forests.

Where will we go this time God?

You confided in this poem that you fear being displaced.

Where are we being exiled to this year?

Make this poem a Geneva Convention.

We know it was you that came up as collards in the crack of dirt that they say is blight now.

And this poem was there laying its life on the line as physical and political accompaniment for you.

Don’t just lead the caravan out of town God, circle the wagon and fight for us. This poem is ready to make love visible.

Show us how to keep a roof over our heads under the sky you said was ours.

And this poem will be willing to give its life for beauty.

We don’t want a huck patch in heaven God.

We want justice on earth.

Oh God yes, make this poem and this author and this poet an instrument of love …

Marvin K. White, MDiv, is currently the Artivist in Residence and part of the Arts Program Team at the Oakland Peace Center. He was the Public Theologian in Residence (2017–18) at First Church Berkeley and a recent Yerba Buena Center for the Arts “Equity” Fellow (2016–17). He is the author of four collections of poetry: Our Name Be Witness, Status, and two Lammy-nominated collections, last rights and nothin’ ugly fly. He is articulating a vision of social, prophetic, and creative justice through his work as a poet, artist, teacher, collaborator, preacher, cake baker, and Facebook Statustician.