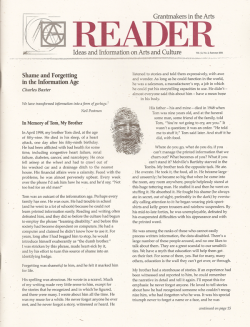 Arts in Education
The significant gains made last year in direct line item appropriations for the arts in education could be lost as Congress considers legislation to reauthorize federal elementary and secondary education programs. President Bush's No Child Left Behind education plan, introduced in the House last spring as H.R. 1, eliminates line-item funding for federal-level programs in the arts and education (including funds provided for education programs of the John F. Kennedy Center for the Performing Arts and Very Special Arts) and instead wraps these funds into flexible block grants. H.R. 1 proposes significant flexibility for local school districts, allowing them to transfer up to 50 percent of the federal education dollars they receive among an assortment of Elementary and Secondary Education Act (ESEA) programs, as long as they demonstrate results. In the House, the Committee on Education and the Workforce held mark-up sessions May 2 and 3 on H.R. 1, and the bill is expected on the House floor in the near future. In the Senate, a comparable bill, S.1, is being debated as of this writing. Senator Thad Cochran (R-MS) has submitted an amendment to reinstate arts in education programs in S.1. The Cochran amendment authorizes a broader range of arts in education activities and makes a range of organizations eligible to receive funds, including state and local educational agencies, institutions of higher education, museums and other cultural institutions, and other public and private agencies, institutions, and organizations. Specific funding levels are not proposed in the Cochran amendment, but rather it provides authorization for "such sums as may be necessary." If Cochran's amendment were accepted, a House/Senate conference committee on the legislation would likely determine the fate of the federal arts in education program. To follow the progress of H.R. 1 and S. 1 check the Library of Congress' Thomas system. For additional information on existing federal arts in education funding check the Web site of the Arts Education Partnership.

Preservation
On May 7 President Bush submitted to Congress a last-minute budget amendment to reinstate $30 million in FY2002 funding for the Save America's Treasures program. The Wall Street Journal, in an article May 9, reported that Bush made the request to save "a historic preservation program backed by First Lady Laura Bush." Bush's budget, the first of his administration, had proposed terminating Save America's Treasures, a program initiated originally under the direction of First Lady Hillary Clinton. The budget amendment calls for the $30 million to be offset by a decrease in a proposed national emergency reserve account which Bush had set aside for "expenditures that are sudden, urgent, unforeseen, and not permanent." The move by the White House to endorse the program is likely to boost chances that Congressional appropriators will fund it later this year.

Digital Copyright
On April 3 the Senate Judiciary Committee held a hearing on digital entertainment and copyright — “Online Entertainment: Coming Soon to a Digital Device Near You?” It was the first such hearing held by the Committee on issues surrounding online music licensing. Committee Chairman, Senator Orrin Hatch (R-UT), who supported the agenda of the Recording Industry Association of America (RIAA) during development of the Digital Millennium Copyright Act in 1999, had expressed frustration over the fact that the industry had done little or nothing to make content available to consumers on the Internet. The day before the hearing, AOL Time Warner, Bertelsmann, and EMI announced they would team with online media company RealNetworks to create MusicNet, which would serve as a backbone for music subscription services on the Internet. Two popular music artists — Don Henley and Alanis Morisette — testified at the hearing that artists often go underrepresented in Washington since they are a diverse group with no center. Morisette said, “History has not been kind to artists who have candidly expressed points of view that differ with those of their record company.” Hilary Rosen (RIAA president) and Richard Parsons (AOL Time Warner co-chief operating officer) told the panel that there is no move afoot to rob artists of profits reaped from the Internet and that details on royalties are yet to be worked out.

National Museum of African American History and Culture
On May 3 legislation was introduced in both houses of Congress authorizing construction on the national mall of a National Museum of African American History and Culture. The bills provide that the museum will be contained within a renovated Arts and Industries Building and the surrounding area. The bill allows for expansion of the Arts and Industries Building, “horizontally, vertically, and below ground.” The legislation states the museum would be “dedicated to the collection, preservation, research, and exhibition of African American historical and cultural material reflecting the breadth and depth of the experiences of persons of African descent living in the United States,” and that “the work of the [museum] will be, fundamentally, the same as the work of all museums in the United States that reflect and express the experiences of the people of the United States in an inclusive manner.” The bill was introduced in the House as H.R. 1083 by Congressman John Lewis (D-GA) and in the Senate as S. 829 by Senator Brownback (R-KS) and nineteen cosponsors. To follow this legislation go to http://thomas.loc.gov/.

Arts in Education Model Development Grants
The U.S. Department of Education expects to publish in May its guidelines for applications for Arts in Education Model Development grants. As reported in the last “From Washington” column, Congress funded these competitive grants at a total of $10 million in the FY 2001 Labor, Health and Human Services, and Education appropriations bill. It is expected that ten to fifteen projects will receive awards ranging from $350,000 to $1,000,000. For complete information on the guidelines, go to www.ed.gov/GrantApps/.

U.S. in UNESCO
The House has passed a Foreign Relations Authorization bill (H.R. 1646, passed May 16) that contains two provisions related to the United States rejoining the United Nations Educational, Scientific, and Cultural Organization (UNESCO). Section 103 of the bill provides authorization of appropriations of $67 million to allow the U.S. to make payment to rejoin UNESCO. Section 103 also authorizes appropriations for a range of educational and cultural exchange programs, including Fulbright Academic Exchange Programs. In addition, the bill contains a Sense of Congress resolution which states that the President should “take all necessary steps” to renew the membership and participation of the United States in UNESCO.

An effort by Congressman Tom Tancredo (R-CO) to strike both sections of the bill relating to UNESCO was defeated by a vote of 193-225. In a Foreign Relations Committee report highlighting dissenting views on the UNESCO provisions, thirteen Republican members stated that “(UNESCO's) new age program includes initiatives such as 'Presenting and Revitalizing our Intangible Heritage' and 'Planet Society, a Worldwide Exchange Network for a New Art of Living on Earth.'” They cited an audit by the Canadian government which found that UNESCO rarely evaluates the cost effectiveness of its programs or sets specific objectives for its programs.

A companion foreign relations authorization bill has not yet been introduced this session in the Senate. The UNESCO provisions would have to be approved by a House/Senate conference committee and signed into law by the President. Congress would also have to provide appropriations.