Arts education in America: What the declines mean for arts participation 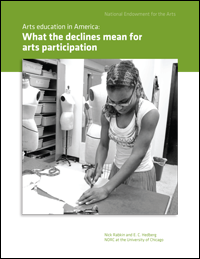 Arts education in America: What the declines mean for arts participation (4.5Mb)

The Surveys of Public Participation in the Arts (SPPAs), conducted for the National Endowment for the Arts, have shown a steady decline in the rates of adult attendance at most “benchmark” arts events — specifically, classical music and jazz concerts, musical and non-musical plays, opera, and ballet performances — as well as declines in other forms of adult arts participation, including personal creation or performance of art and adult arts education — since 1982. The reasons for these declines, and potential strategies to mitigate or reverse them, are of vital importance to American artists, cultural policymakers, arts organizations, and other stakeholders concerned about the future of American culture.

An analysis of 1992 SPPA data found that “arts education was the strongest predictor of almost all types of arts participation (arts performance being the exception).” This study analyzes data from four administrations of the SPPA — 1982, 1992, 2002, and 2008 — to address several important questions prompted by that finding.