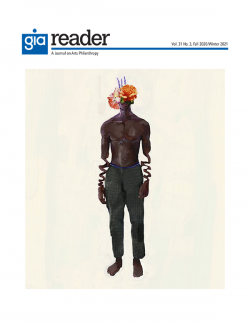 Foundation Grants to Arts and Culture in 2018: A One-Year Snapshot 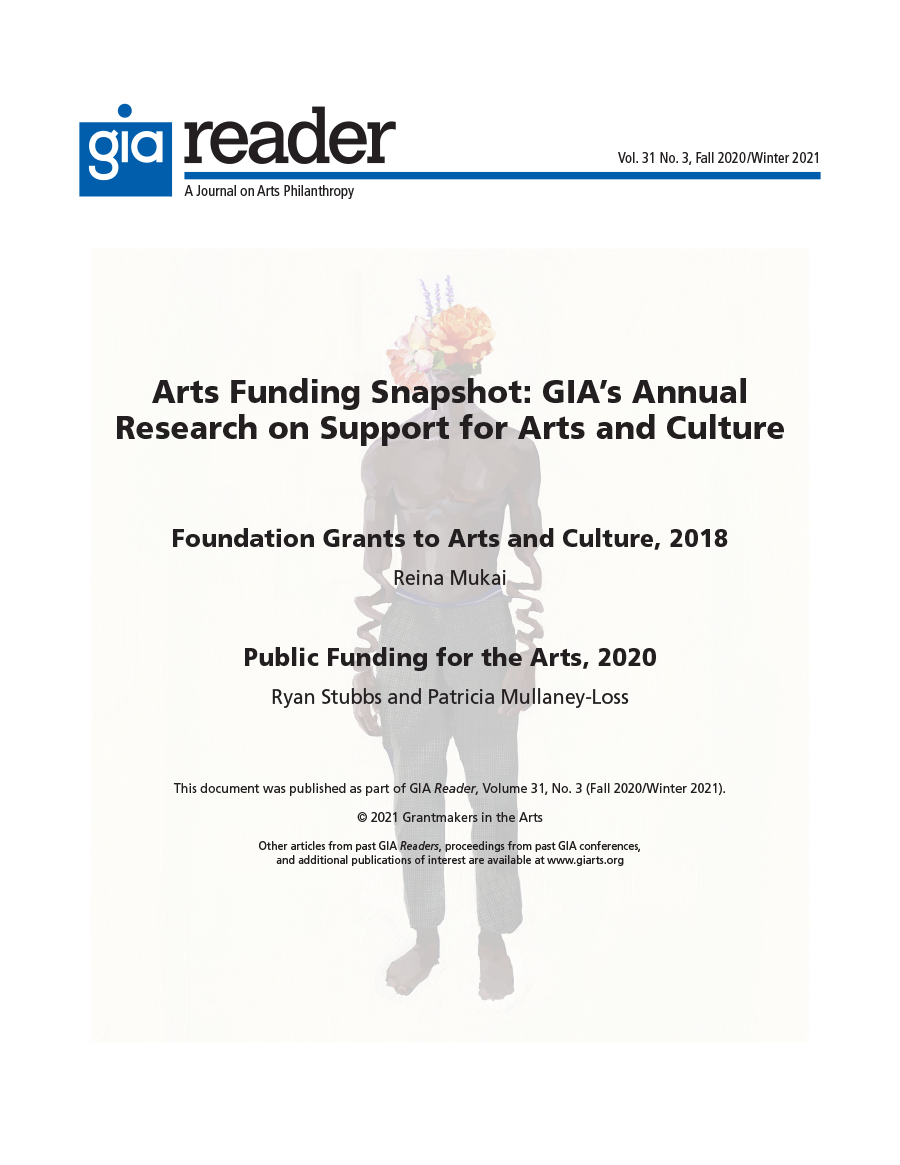 In 2018, giving by the approximately 86,000 active US private and community foundations rose 4% to $80.7 billion. Among the largest US independent, corporate, community, and grantmaking operating foundations included in Candid’s 2018 Foundation 1000 data set, overall giving was down 2% among a matched set of funders, however, arts and culture funding was up 7%. Arts and culture remained among top foundation funding priorities ranking fifth following human services.

Candid offers these key findings from GIA’s nineteenth snapshot of foundation giving to arts and culture. The definition of arts and culture used for this snapshot is based on Candid’s Philanthropy Classification System and encompasses funding for the performing arts, museums, visual arts, multidisciplinary arts, humanities, historical activities, arts services, folk arts, public arts, and cultural awareness. The findings in this snapshot are based on analysis of two closely related data sets. The analysis of the distribution of 2018 arts and culture giving uses the latest Foundation 1000 dataset,1 while the analysis of changes in foundation giving for the arts between 2017 and 2018 use a matched set of foundations that are consistent between the Foundation 1000 for each of those two years.2 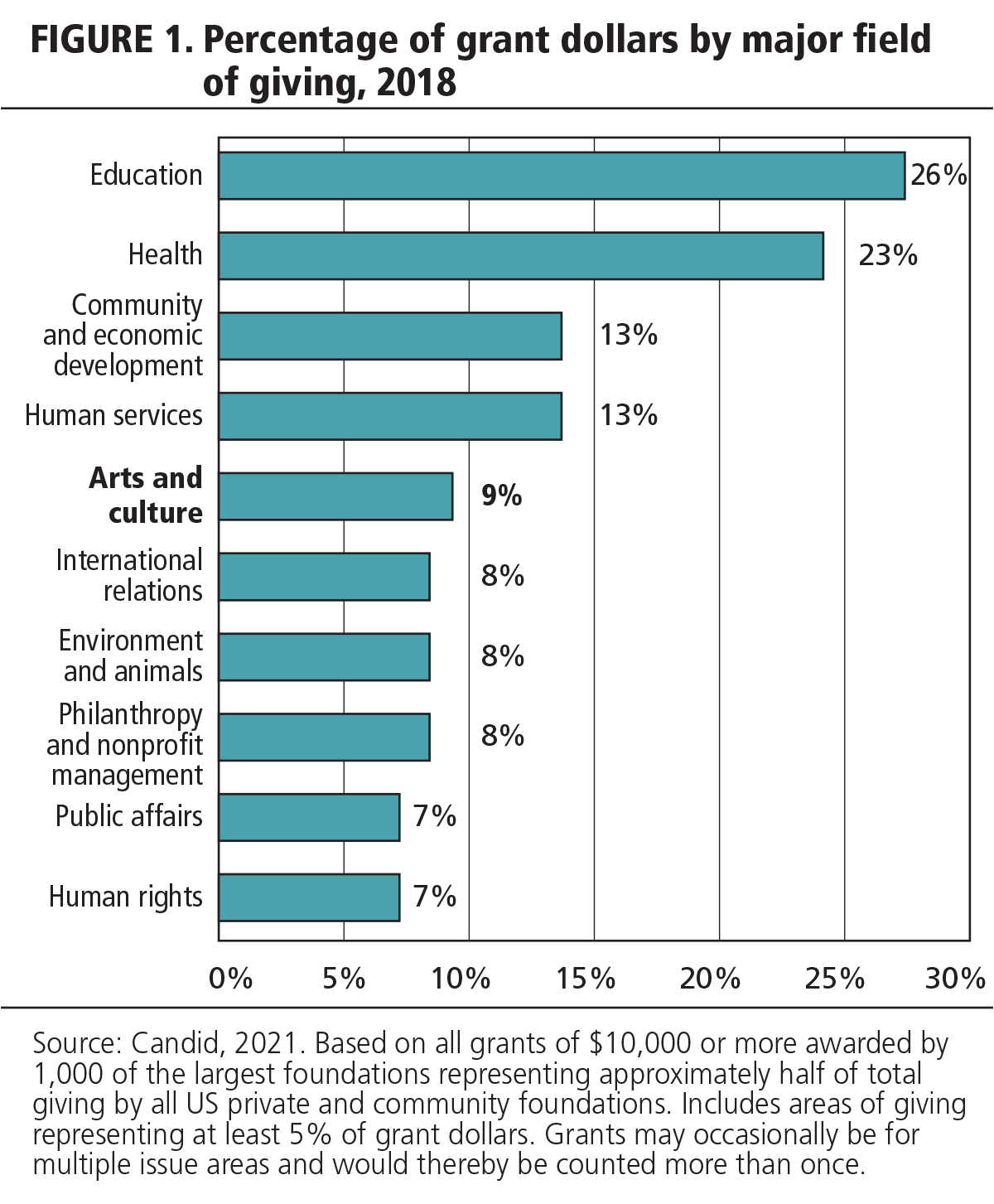 Arts funding as a share of total dollars was up in 2018.

Among the 1,000 largest foundations included in Candid’s grants sample for 2018, arts giving totaled $3 billion, or 9% of overall grant dollars. Compared to the previous year, share of dollars was up slightly and share of number of grants remained basically unchanged.

Foundation funding for arts and culture was up in 2018.

Among a matched set of leading funders, arts funding increased 7% between 2017 and 2018 compared to a 2% decline in overall giving by these foundations.

The size of the median arts grant was up.

Relative to overall giving, a larger share of arts grant dollars was for general operating support.

Top arts funders accounted for a larger share of overall giving than in 2017.

The top twenty-five arts funders by giving amount provided 42% of total foundation arts dollars in 2018, up from the 38% share reported in 2017. The share of arts giving accounted for by the top funders has remained relatively consistent for the past decade. 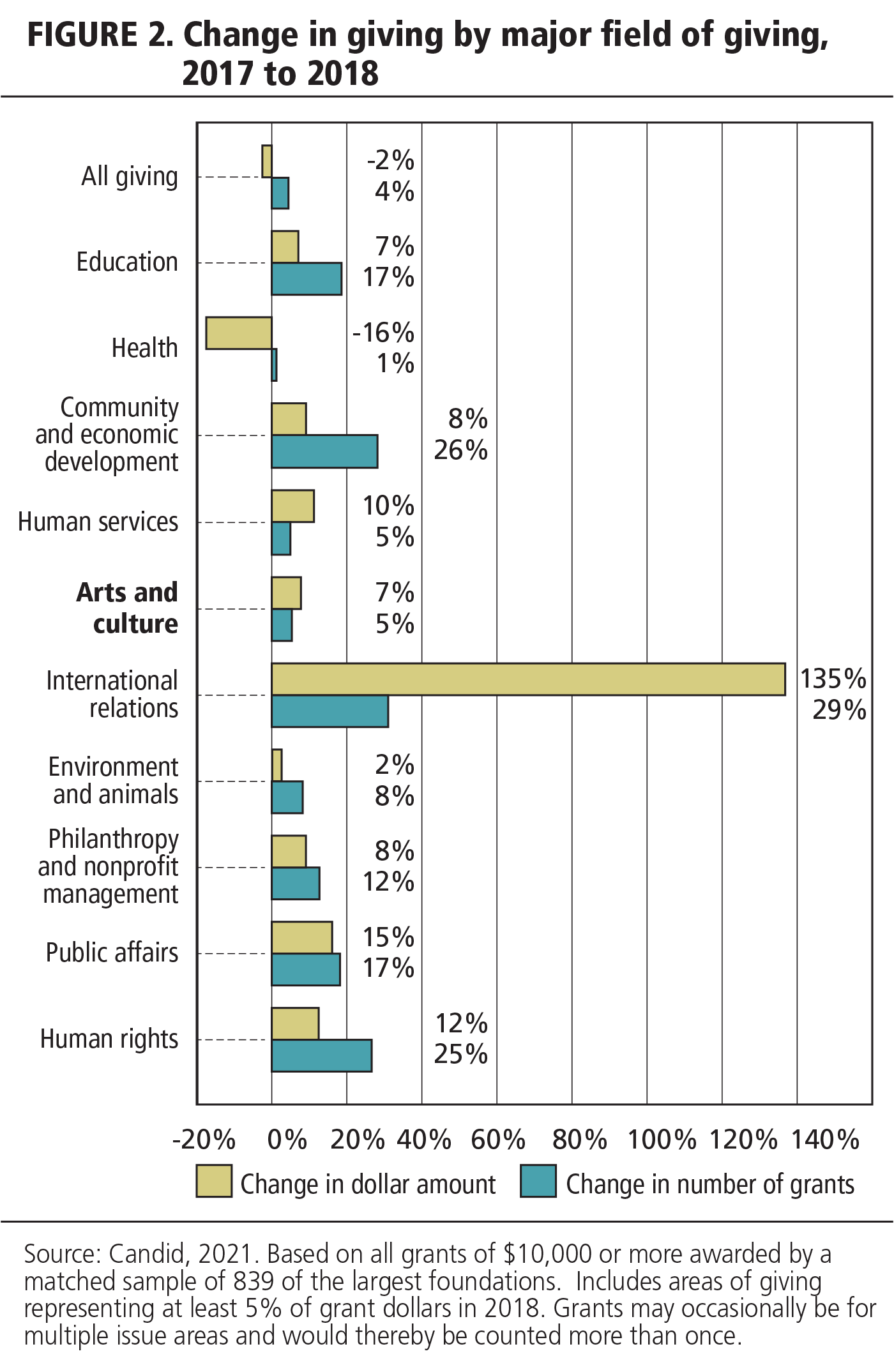 The foundations included in Candid’s 2018 Foundation 1000 data set awarded 19,074 arts and culture grants totaling $3 billion, or 9% of overall grant dollars. Compared to the previous year, the share for arts dollars was up slightly (8% in 2017), while the share of number of grants remained basically unchanged. Among a matched subset of 839 funders, grant dollars for the arts was up 7% between 2017 and 2018, compared to a 2% decrease in grant dollars overall. Among the top-ranked subject areas by grant dollars, international relations, public affairs, human rights, and human services reported the fastest increases in dollars.

Every year and in all funding areas, a few very large grants can skew overall totals, creating distortions in long-term grantmaking trends. In 2018, 22 arts and culture grants provided at least $10 million, and instances where these grants had a notable impact on grantmaking patterns are identified throughout this analysis. Yet despite the potential fluctuations caused by these exceptional grants, Candid data in all fields have always included them, providing consistency over time.3 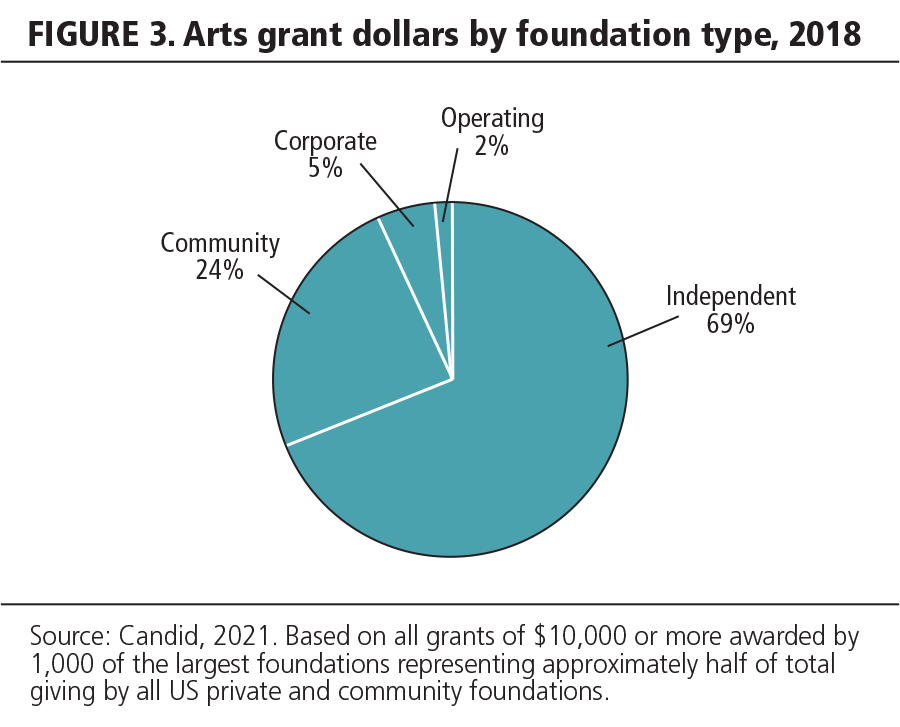 Funding for performing arts accounted for close to one-third of all foundation art dollars in 2018, surpassing the share reported for museums (24%). From the start of the 1980s until 1997, the performing arts have consistently received more foundation support than museums. However, museums surpassed the performing arts by share in the late 1990s to early 2000s and several times in recent years (2010, 2013, and 2014). The shifts in share between these two fields of activity from year to year could be due to the entry onto the scene of new and large arts funders, extraordinarily large grants, the contribution of valuable art collections, and new capital projects at museums.

In 2018, museums benefited from 3,228 grants totaling $714 million awarded by the 1,000 largest foundations included in the Foundation 1000 data set. Nearly half of funding supported art museums. Among a matched set of funders, grant dollars allocated to museums was down 8% between 2017 and 2018, while the number of grants declined 4%. The largest museum grant in 2018 was a $48.9 million grant from Silicon Valley Community Foundation to the Flying Heritage and Combat Armor Museum.

In 2018, the humanities benefited from 1,871 grants totaling $328 million awarded by the 1,000 largest foundations included in the Foundation 1000 data set.4 Funding for this area accounted for 10% of arts grant dollars in 2018, consistent with the share captured in 2017. Among a matched set of funders, grant dollars awarded for the humanities increased 8%, while the number of grants awarded was up 39%.

Support for historic preservation declined 23% between 2017 and 2018 among a matched set of funders, while the number of grants awarded remained the same.5 Among the largest grants awarded for historic preservation in the latest year was a $5 million grant from the Andrew W. Mellon Foundation to Equal Justice Initiative for the construction of a center of education, interpretation, and art at the National Memorial for Peace and Justice, and the development of programs that will disseminate knowledge about the history of slavery in the United States. Overall, historic preservation benefited from 1,318 grants totaling $165.2 million in 2018. 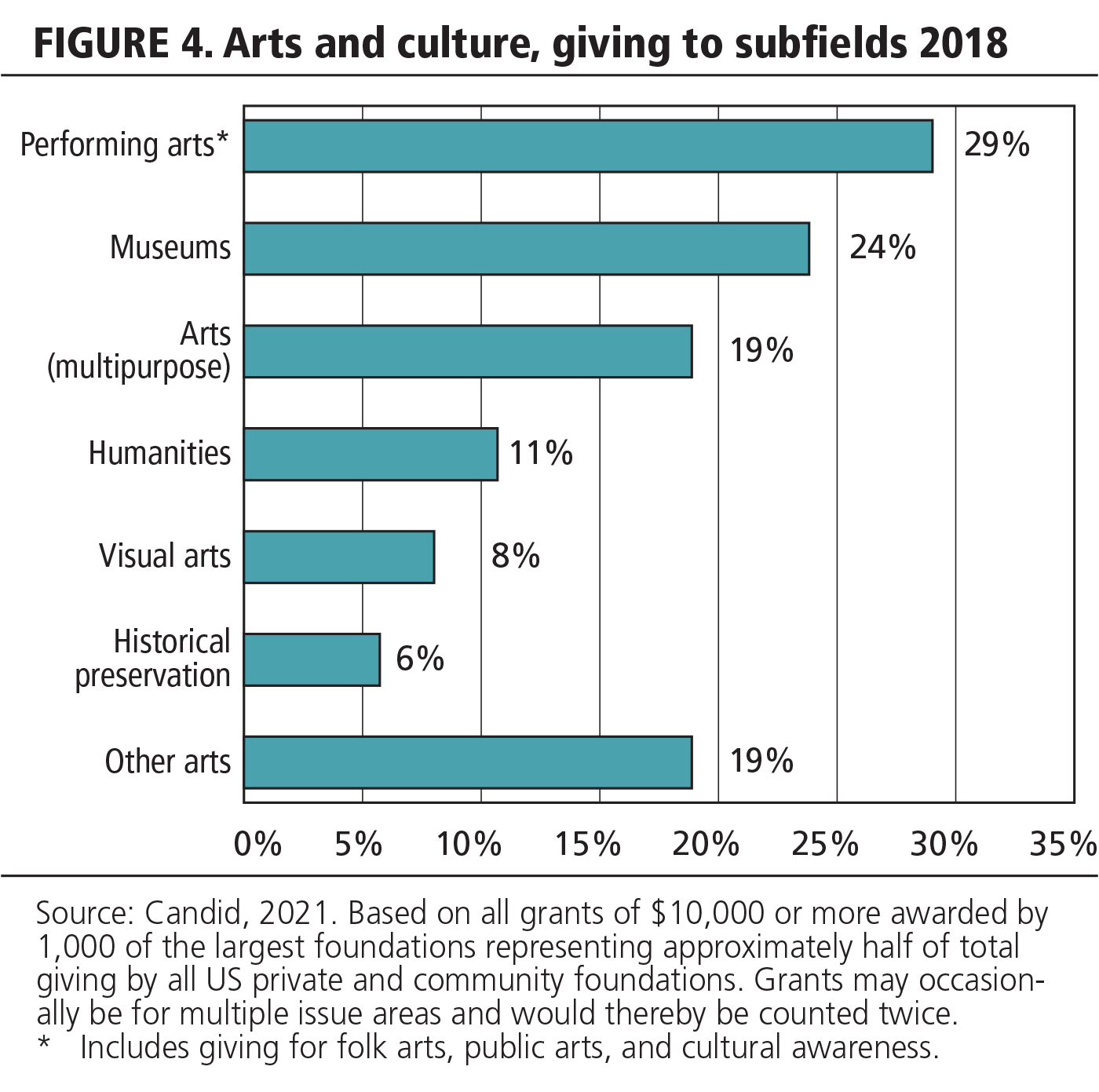 Source: Candid, 2021. Based on all grants of $10,000 or more awarded by 1,000 of the largest foundations representing approximately half of total giving by all US private and community foundations. Grants may occasionally be for multiple support stategies, e.g., for new works and for endowment, and would thereby be counted twice.

Among a matched set of funders, grant dollars for the visual arts and architecture increased 37% between 2017 and 2018, while the number of grants for the field was up 6%. The visual arts and architecture benefited from $229 million in 2018, including a $4 million grant from the Bernard and Anne Spitzer Charitable Trust to the City College of New York for the Bernard and Anne Spitzer School of Architecture.

An important caveat to report with regard to the allocation of foundation dollars by specific support strategy is that for roughly one-fifth of arts grant dollars in the 2018 Candid sample, the support strategy could not be identified. This means that modest differences in percentages may not be reliable.7

General operating support received the largest share of arts grants dollars in 2018 (25% of all arts funding). The shares of grant dollars and number of grants allocated for this support strategy in 2018 were higher for arts and culture (25% and 27%, respectively) than the overall share directed to general operating support by the Foundation 1000 foundations, which accounted for 19% of grant dollars and 22% of the number of grants.

Capital support accounted for the third largest share of arts grant dollars. Similar to general support, the share of grant dollars allocated for this type of support was also higher for arts and culture (14%) than for grants overall (8%). Grants for capital support are larger on average than awards for program and general operating support, and exceptionally large capital grants can have a pronounced effect on the distribution of funding by support strategy.

Table 1 provides a breakdown of more specific support strategies within the larger support categories and lists both the specific dollar value and number of grants made in each type. As for all data in the “snapshot,” it is important to keep in mind that this table includes only grants of $10,000 or more awarded to organizations by a sample of the top 1,000 foundations by total giving. It is also important to note that about one-fifth of the arts grant dollars in this sample did not have a specified support strategy.

Source: Candid, 2021. Based on all grants of $10,000 or more awarded by 1,000 of the largest foundations representing approximately half of total giving by all US private and community foundations.

The median or “typical” grant amount for arts and culture in 2018 was $28,150, which was below the median amount for all foundation grants ($35,000).8 While this is the fourth consecutive year that the median arts grant amount has exceeded $25,000* more study would be required to determine whether this is a lasting upswing in the size of arts grants.9

In addition to the $10 million general support award from the Community Foundation of Greater Memphis to Ballet Memphis noted earlier, examples of other especially large grants in 2018 include Bloomberg Philanthropies $20 million grant for support and maintenance for the Shed NYC, a cultural center that commissions, produces, and presents a wide range of activities in performing arts, visual arts, and pop culture; a $5.4 million grant from the Doris Duke Charitable Foundation to the New England Foundation for the Arts to support the National Dance Project, which enables artists to create, present and tour new dance work; and a $3 million award from the Avenir Foundation to the Denver Art Museum for the museum’s Vision 2021 campaign.

Source: Foundation Center by Candid, 2021. Based on all grants of $10,000 or more awarded by 1,000 of the largest foundations representing approximately half of total giving by all US private and community foundations. Grants may provide capital support and other types of support. In these cases, grants would be counted in both totals. Figures include only grants that could be coded as providing specific types of support.

Of the foundations that committed large percentages of their grant dollars to arts and culture, many are smaller foundations in the sample. Among the top one hundred foundations ranked by share of arts giving out of total giving, one-third (or 32 funders) gave less than $5 million in total arts grant dollars in 2018.

TABLE 4. Top 35 foundations by share of arts giving out of overall giving, 2018

Source: Candid, 2021. Based on all grants of $10,000 or more awarded by 1,000 of the largest foundations representing approximately half of total giving by all US private and community foundations.