Foundation Grants to Arts and Culture, 2014

This year’s snapshot of arts funding is the second that utilizes Foundation Center’s new Philanthropy Classification System. This system of coding and organizing foundation funding replaces the Grants Classification System (GCS), which was employed by Foundation Center for nearly a quarter century. For a description of the relevant changes from the GCS, please refer to last year’s snapshot of arts funding in the winter 2016 issue of the Reader.

In 2014, giving by the approximately 87,000 active US foundations rose 9 percent, to $60.2 billion. Similarly, among 1,000 of the largest US independent, corporate, community, and grantmaking operating foundations included in Foundation Center’s 2014 data set, overall giving was up 10 percent. Arts and culture funding grew at a more modest rate of 4 percent. In addition, while actual grant dollars in 2014 were higher and arts and culture continued to rank among the top three foundation funding priorities, the share of overall foundation support targeting arts and culture remained smaller than what was reported in the 1980s, 1990s, and even earlier in the 2000s. Actual arts grants dollars are likely to grow along with overall foundation giving, but what remains unclear is whether arts funding will rebound to its earlier share of overall foundation support.

Foundation Center offers these key findings from GIA’s fifteenth snapshot of foundation giving to arts and culture. The definition of arts and culture used for this snapshot is based on Foundation Center’s Philanthropy Classification System and encompasses funding for the performing arts, museums, visual arts, multidisciplinary arts, humanities, historical activities, arts services, folk arts, public arts, and cultural awareness. The findings in this snapshot are based on analysis of two closely related data sets. The distribution of 2014 arts and culture giving uses the latest FC 1000 data set,1 while the changes in foundation giving for the arts between 2013 and 2014 use a subset of 828 funders for which we had 2013 and 2014 data, referred to in this snapshot as the matched set of foundations.2 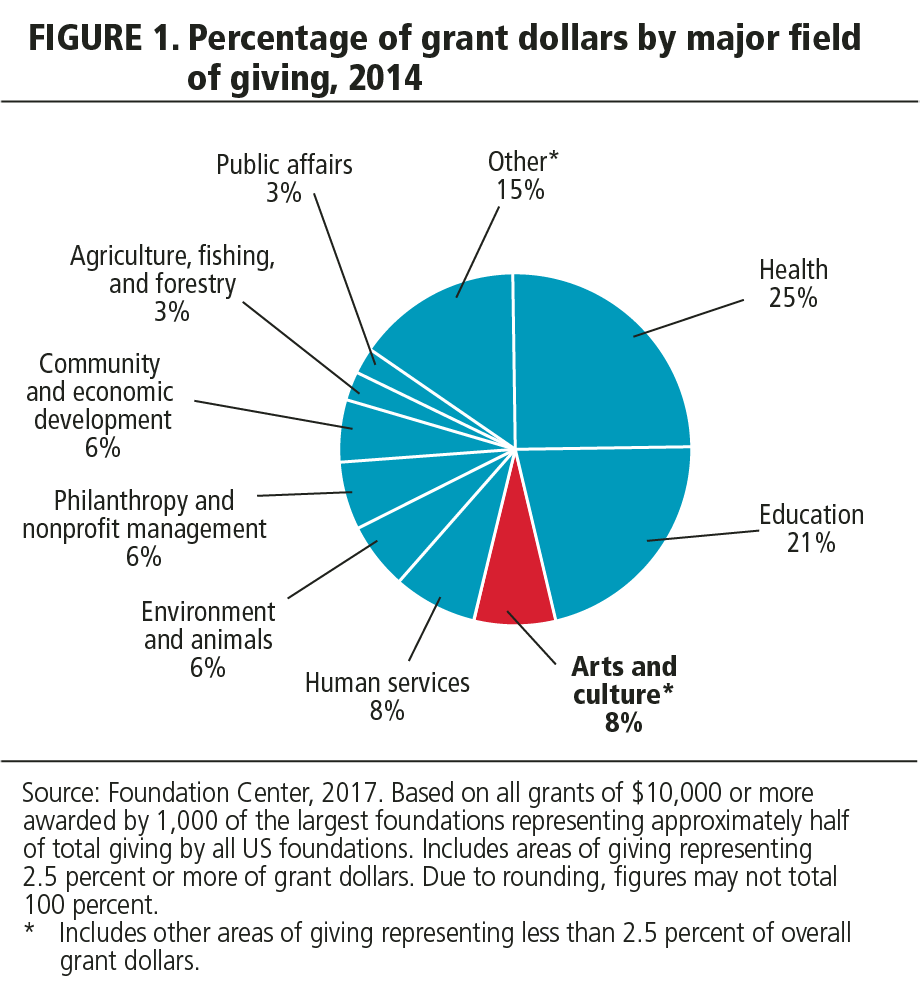 Arts funding as a share of total dollars dipped slightly in 2014. Among the 1,000 largest foundations included in Foundation Center’s grants sample for 2014, arts giving totaled nearly $2 billion, or 8 percent of overall grant dollars. Compared to the previous year, share of dollars was down slightly, while share of number of arts grants remained basically unchanged.

Foundation funding for arts and culture was up in 2014. Among the matched set of leading funders, arts funding increased 4 percent between 2013 and 2014 but lagged behind a 10 percent increase in overall giving by these foundations.

The size of the median arts grant remained unchanged. The median arts and culture grant size — $25,000 — did not change from 2013 to 2014 (nor has it changed since the 1990s), although the real value of the median grant decreased due to inflation. The unadjusted value was below the $30,000 median amount for all foundation grants in the latest year.

Large grants account for more than half of arts grant dollars. Large arts grants of $500,000 and more captured 58 percent of total grant dollars for the arts in 2014, up from 55 percent in 2013.

Please note: It is important to keep in mind that the foundation grantmaking examined here represents only one source of arts financing. It does not examine arts support from earned income, governments, individual donors, or the business community. This analysis also looks only at foundation arts support for nonprofit organizations, and not for individual artists, commercial arts enterprises, or informal and unincorporated activities. 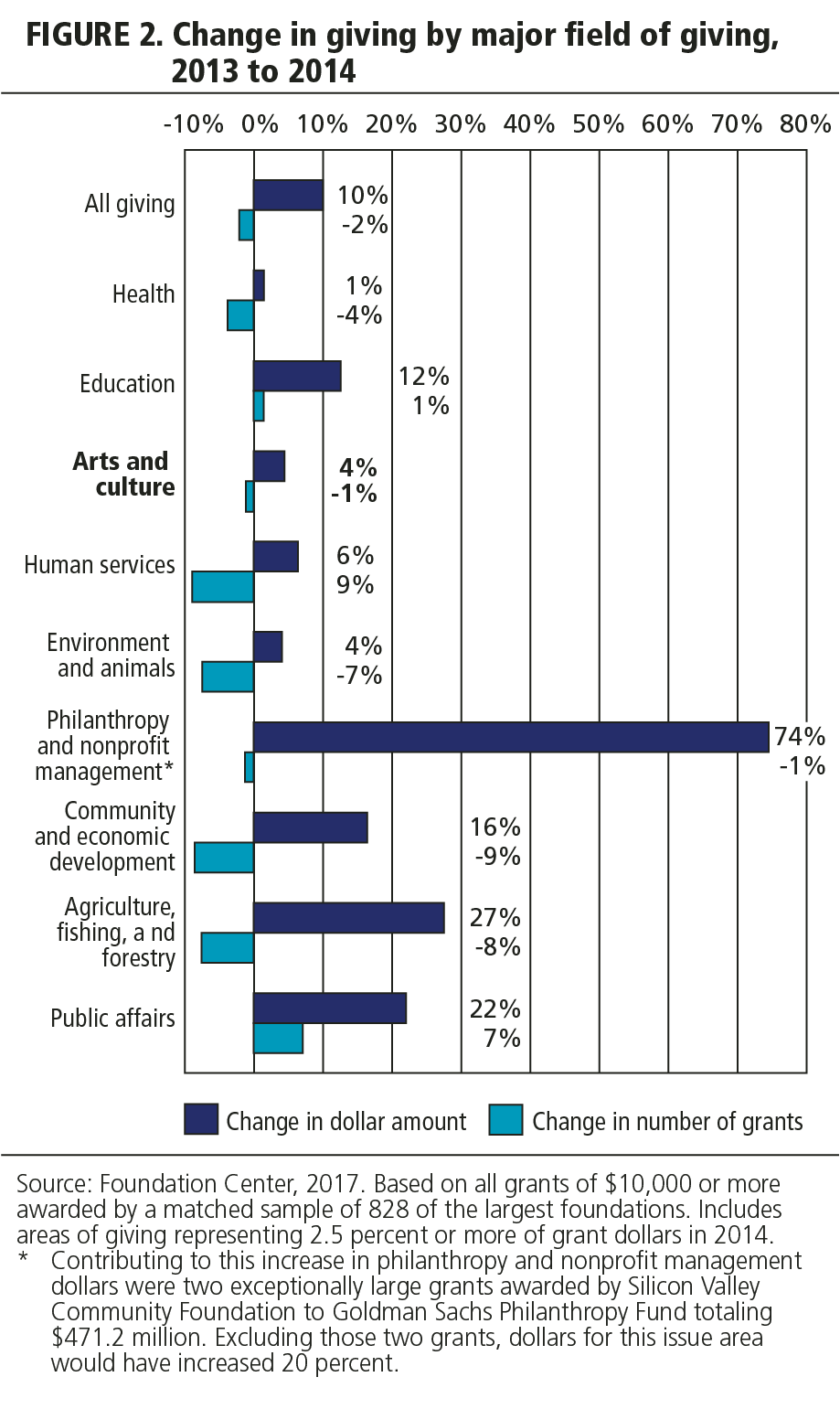 Overall foundation dollars for the arts. The foundations included in Foundation Center’s 2014 FC 1000 data set awarded 16,545 arts and culture grants totaling nearly $2 billion, or 8 percent of overall grant dollars (figure 1). Compared to the previous year, the share of arts dollars was down slightly (7.6 percent versus 8.2 percent), while the share of number of arts grants remained basically unchanged at roughly 12 percent. Comparing giving by the matched set of funders shows that grant dollars for the arts increased 4 percent between 2013 and 2014, compared to a 10 percent increase in grant dollars overall (figure 2).

The impact of exceptionally large grants. Every year and in all funding areas, a few very large grants can skew overall totals, creating distortions in long-term grantmaking trends. In 2014, seventeen arts and culture grants provided at least $10 million, and instances where these grants had a notable impact on grantmaking patterns are identified throughout this analysis. Yet despite the potential fluctuations caused by these exceptional grants, Foundation Center data in all fields have always included them, providing consistency over time. (In addition, Foundation Center provides statistics based on share of number of grants, which are not skewed by exceptionally large grants.) 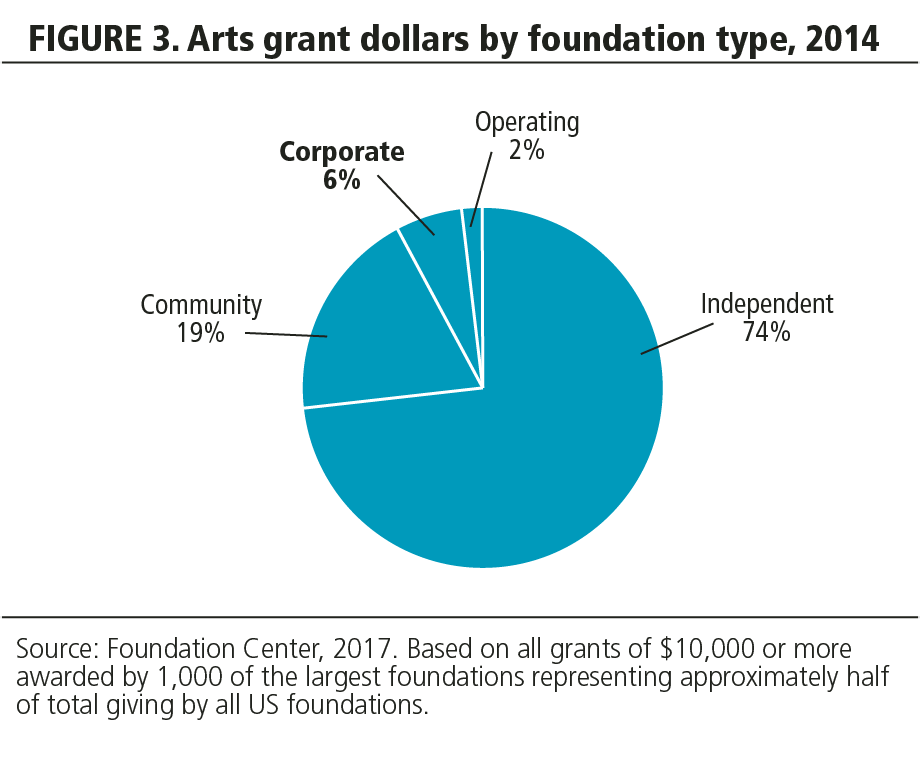 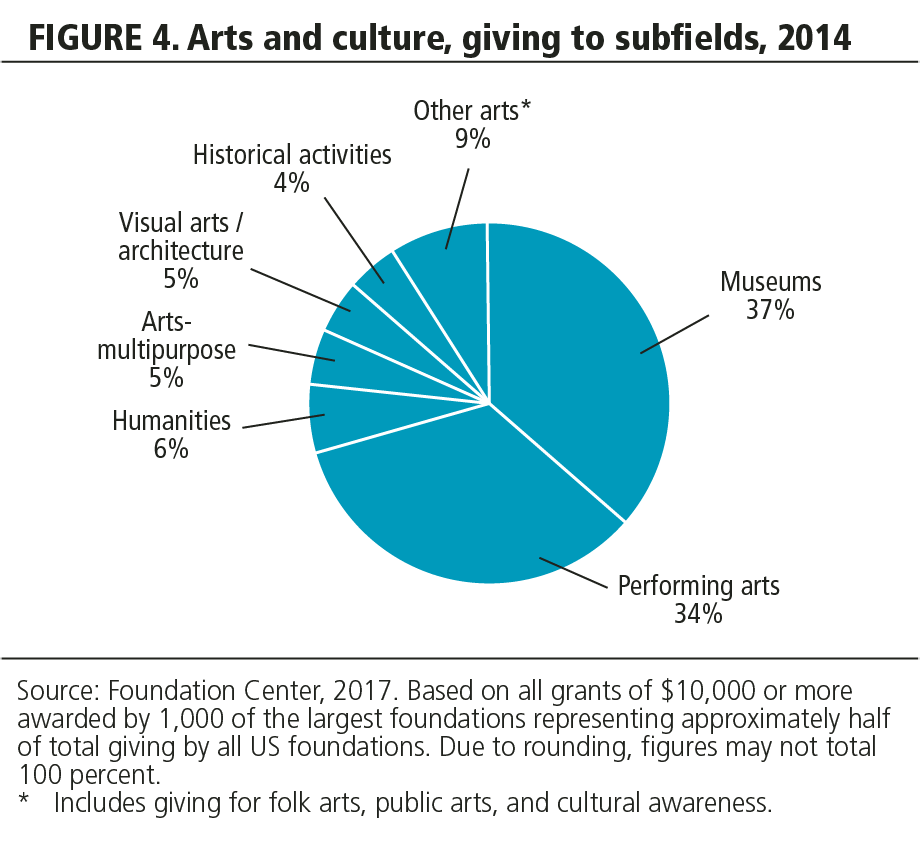 Funding for museums accounted for close to two-fifths (37 percent) of all foundation art dollars in 2014 (figure 4), surpassing the share reported for the performing arts (34 percent). From the start of the 1980s until 1997, the performing arts consistently received more foundation support than museums. However, museums surpassed the performing arts by share in the late 1990s to early 2000s, and several times in recent years (2008, 2009, 2013, and 2014). More study would be needed to adequately understand the underlying reasons for the shifts in share between these two fields of activity, for example, the entry onto the scene of new and large arts funders, extraordinarily large grants, the contribution of valuable art collections, and new capital projects at museums.

Giving to museums. In 2014, museums benefited from 3,700 grants totaling nearly $720 million awarded by the 1,000 largest foundations included in the FC 1000 data set. Among museum types, more than half of funding supported art museums. Among the matched set of funders, grant dollars allocated to museums increased 17 percent between 2013 and 2014, while the number of grants was up 10 percent. The largest museum grant in 2014 was a $31 million award from the Silicon Valley Community Foundation to the San Francisco Museum of Modern Art.

Giving to the humanities. In 2014, the humanities benefited from 540 grants totaling $111.7 million awarded by the 1,000 largest foundations included in the FC 1000 data set.3 Funding for this area accounted for 6 percent of arts grant dollars in 2014, up slightly from the 5 percent share captured in 2013. Among the matched set of funders, grant dollars awarded for the humanities increased 12 percent, while the number of grants awarded was up only 2 percent.

* Grants may occasionally be for multiple types of support, e.g., for new works and for endowment, and would thereby be counted twice.

An important caveat to report on the allocation of foundation dollars by specific support strategy is that for roughly 23 percent of arts grant dollars in the 2014 Foundation Center sample, the support strategy could not be identified. This means that modest differences in percentages may not be reliable. (The grant records available to Foundation Center often lack the information necessary to identify the support strategy. For example, it is often the case that the only source of data on grants is the 990-PF tax return, and this tends to be less complete than other forms of grant reporting.)

The arts compared to other foundation fields of giving. dollars in 2014. The shares of grant dollars and number of grants allocated for this support strategy in 2014 were higher for arts and culture (26 percent and 29 percent, respectively) than the overall share directed to operating support by FC 1000 foundations, which accounted for roughly 16 percent of grant dollars.

Capital support accounted for the third largest share of arts grant dollars. Similar to general support, the share of grant dollars allocated for this type of support was also higher for arts and culture (19 percent) than for grants overall (8 percent). Grants for capital support are larger on average than awards for program and general operating support, and exceptionally large capital grants can have a pronounced effect on the distribution of funding by support strategy.

Arts grants by specific types of support. Table 1 provides a breakdown of more specific support strategies within the larger support categories and lists both the specific dollar value and number of grants made in each type. As with all data in the snapshot, it is important to keep in mind that this table includes only grants of $10,000 or more awarded to organizations by a sample of the top 1,000 foundations by total giving. It is also important to note that approximately 23 percent of the arts grant dollars in this sample did not have a specified support strategy.

* Grants may occasionally be for multiple types of support, e.g., for new works and for endowment, and would thereby be counted twice.

Median grant size. The median or “typical” grant amount for arts and culture in 2014 was $25,000, which was below the median amount for all foundation grants ($30,000).5 The median amount for arts and culture has remained consistent at $25,000 since the early 1990s. More study would be required to determine whether the unchanged median means that foundation arts grants simply are not keeping pace with inflation, or whether, in combination with the increased number of grants, it means that foundations are choosing to distribute funds more broadly to a larger number of recipients.

Large grants. The share of larger arts grants ($500,000 and over) remained consistent at 4 percent of the total number of arts grants in 2014. Their share of total grant dollars increased slightly to 58 percent, compared to 56 percent in 2013. Overall, foundations in the sample made ninety-six arts grants of at least $2.5 million in 2014, up slightly from 2013.

In addition to a $5 million award from the Annenberg Foundation to the Wallis Annenberg Center for the Performing Arts, noted earlier, examples of other especially large grants in 2014 included Andrew W. Mellon Foundation’s $10 million award to the Detroit Institute of Arts for its “Grand Bargain” to hold its collections for the public in perpetuity; Roberts Foundation’s $8.5 million grant to expand the San Francisco Museum of Modern Art; and a $7.9 million grant to the Brookfield Arts Foundation from the Edward C. Johnson Fund for art acquisition.

TABLE 4. Top 35 foundations by share of arts giving out of overall giving, 2014