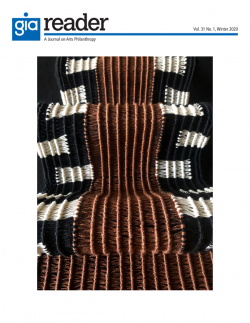 Public Funding for Arts and Culture in 2019

Public funding for the arts in the United States comes from federal, state, and local governments. Congressional allocations to the National Endowment for the Arts (NEA), legislative appropriations to state arts agencies, and local government funds going to local arts agencies provide useful indicators of public support for the arts and culture. Together, these agencies and organizations distribute grants and services to artists and cultural organizations across the nation.

In Fiscal Year (FY) 2019, federal, state, and local public funding for the arts totaled $1.39 billion, for a total per capita investment of $4.19. Comprising this total were:

In nominal dollars (not adjusted for inflation), public funding for the arts increased by almost 20% over the past 20 years. State and local funding patterns correlate with periods of economic growth and recession. State arts agency aggregate appropriations reached a high point in 2001, while local funding reported a historical high point last year. Federal funding for the NEA has displayed incremental growth after sustaining cuts during the last recession.

Despite these nominal dollar increases, public funding for the arts has not kept pace with inflation. When adjusting for inflation, total public funding decreased by 18% over the past 20 years. In constant dollar terms, state arts agency appropriations decreased by 35%, local funding contracted by 12%, and federal funds have increased by 9%. 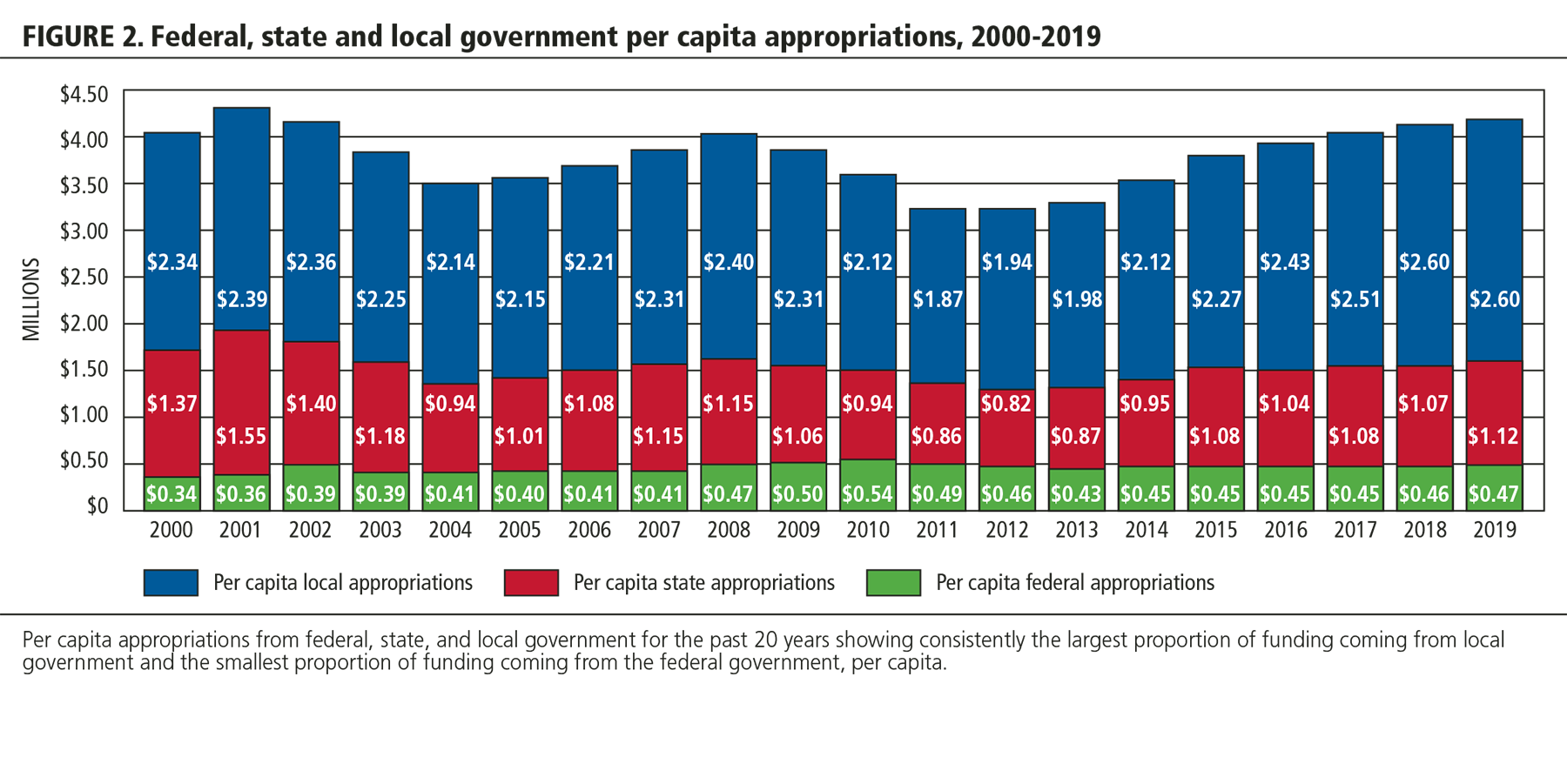 Measuring public funding relative to total population provides an important yardstick, considering that these funds originate from all taxpayers and are meant to benefit all residents. As populations grow, public arts agencies need to serve more people. Combined, federal, state, and local arts funding yielded a per capita investment of $4.19 in 2019. Federal, state, and local funding contribute $0.47, $1.12, and $2.60 respectively. Combined per capita appropriations have been increasing since 2012, but are still below nominal 2001 levels. When taking inflation into consideration, total per capita appropriation equaled $2.87 in 2019. This analysis shows that the value of the dollar, combined with a growing population, increases the strain on public arts funding.

Most states are experiencing an increase in total appropriations for the arts. Based on preliminary estimates for the year ahead, state arts funding is projected to reach its highest level in the last twenty years in FY2020. However, appropriations to state arts agencies are constantly in flux, and mid-year changes are likely to occur.2 Also, not every state has seen this magnitude of increase. Seventeen states will likely experience flat or decreased funding for the arts in FY2020. Additionally, twenty-eight states are still expected to invest less than $1.00 per capita for the arts.3

Congress has yet to pass a federal budget for FY2020 as of this writing. For the third year in a row, the President recommended a complete elimination of the NEA for next year. However, the NEA continues to receive broad support in Congress from elected officials across the political spectrum, and both chambers have recommended increases for the agency for FY2020. Until Congress enacts the spending package for the Department of the Interior — the budget bill in which the NEA is placed — continuing resolutions have kept funding for the agency at FY2019 levels.

The outlook for local arts funding is harder to project. Although local arts funding is riding at an all-time high, its growth has stalled in recent years, which mirrors the bleak budget conditions reported by many cities and counties. Overall, cities’ revenue growth slowed down in 2018, and almost two thirds of large cities are projecting recessions as early as next year.4 Given this context, it will be important to monitor whether local spending on the arts may experience slower growth, if not outright declines, over the next few years.

As seen currently at the local level, appropriated funds to the arts and culture at all levels of government ebb and flow as fiscal conditions shift. Grantmaking is directly affected by the fluctuation of appropriations. By extension, organizations and individuals who receive grants and other forms of support from government agencies are indirectly affected by revenue growth and fiscal stability — or the reverse.

Direct federal grants from the NEA totaled 2,239 and $59.3 million in FY2018. Another $50.7 million from the NEA, or about 40% of the Endowment’s appropriated budget, was awarded to state and regional agencies for further grantmaking and related services. State arts agencies, using a combination of state and federal funds, awarded 23,118 grants and $315.1 million in award dollars in FY2018.

The diverse roles of public and private grantmaking entities allow for a multiplicity of funding priorities and agendas. There is no exact alignment when comparing grantmaking data across public and private sectors. Additionally, local arts agencies do not employ standard data collection consistently across the county. However, using published data from state arts agencies, the NEA, and Candid’s 2017 data on the one thousand largest foundations, there are a handful of categories for which we can approximate relative investments.

Outside of operating support, it is possible to compare a few other grant categories and activity types. Foundations, state arts agencies, and the NEA all make investments in museums and arts education. A key contrast between public and private sectors is investment in capital construction and physical infrastructure. The NEA does not provide funding for capital construction, and relatively few state arts agencies make grants for facilities. Foundations bear the load for funding physical cultural infrastructure in the United States. 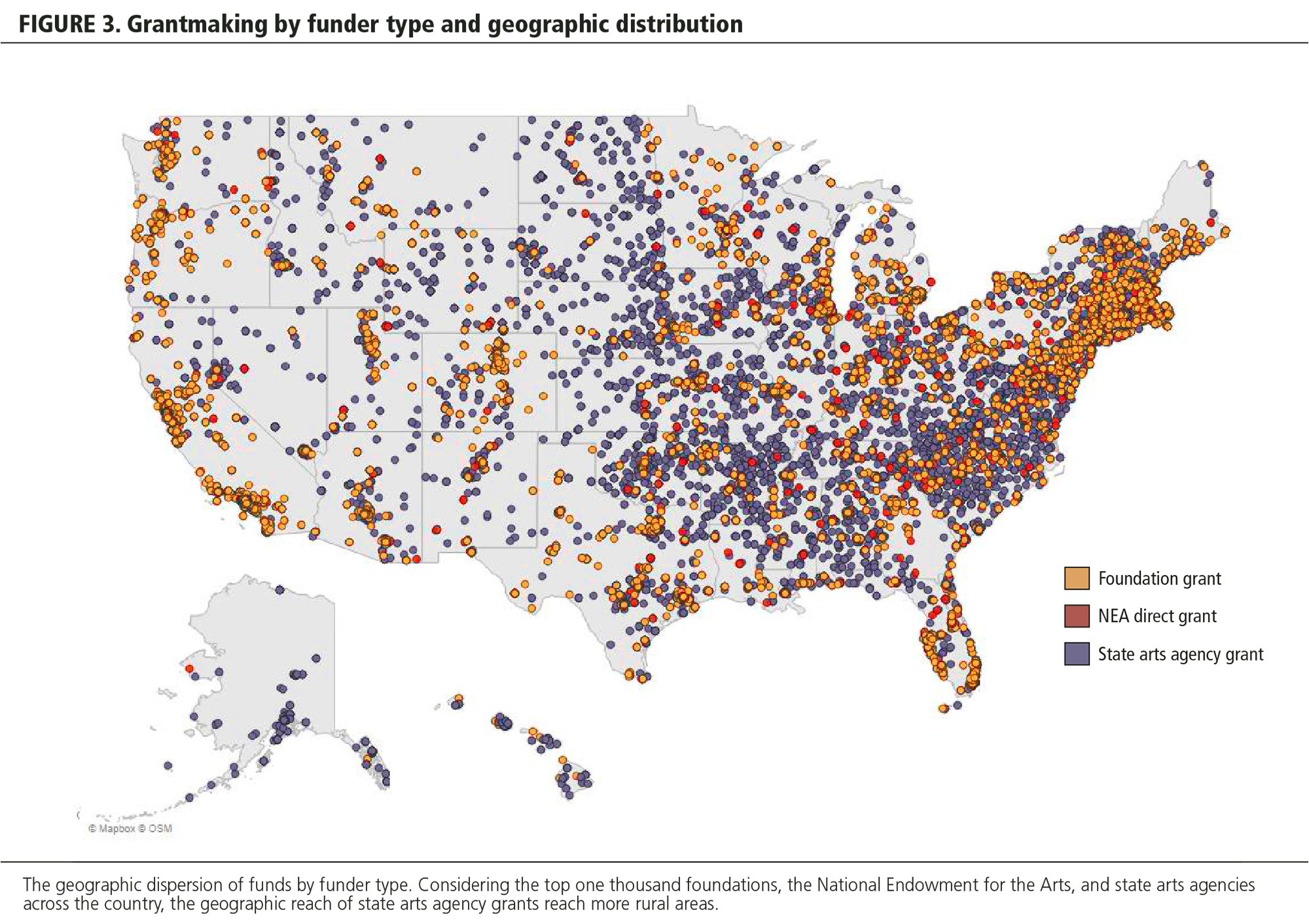 Like per capita calculations, analyzing award sizes and geographic distribution proves useful when assessing how public funds serve the entire population. The distribution of grants from publicly funded art agencies reflects the priority of geographic diversity. In order to cover more ground with the amount of appropriations a public entity receives, many of these grants will be small in size. To illustrate this, state arts agencies have a median award value of $5,000. Although the median award amount from the NEA is $20,000, 57% of all their awarded grants are less than $25,000 in size. In contrast, the one thousand largest foundations award higher levels of grant dollars, the majority of which are above $25,000.

When taking a closer look at the geographic dispersion of funds, variation in grant size allows for broader distribution of grants to all corners of the United States. More than 90% of the country’s landmass is considered rural, but only 18% of the population lives within those areas. Per the median grant sizes discussed above, smaller state arts agency grants means a broader distribution of funds to smaller organizations. When mapping grants from the top one thousand foundations, the NEA, and state arts agencies across the country, the geographic reach of state arts agency grants cover more rural areas.

State arts agencies award 21% of their grants — and 17% of grant dollars — to rural areas. At the federal level, over 11% of the NEA’s grant-funded activities took place in non-metropolitan areas of the country in 2017.8 In contrast, a US Department of Agriculture analysis found that only 5.5% of large foundations’ domestic grant dollars went to rural areas.9 Private foundation dollars to arts and culture do not reach 65% of US counties, whereas awards from the NEA reach 779 more counties than the top one thousand private foundations.10

Government support at the federal, state, and local levels is important for attaining access to arts and culture across a nation with 3.8 million square miles of land — though the cultural ecosystem requires both public and private support to thrive.11 While the private sector provides the lion’s share of support, public funds support different grantmaking patterns to meet the needs of their constituencies and public mandates.

Ryan Stubbs is senior director of research at the National Assembly of State Arts Agencies.

Patricia Mullaney-Loss is a research associate at the National Assembly of State Arts Agencies.