Revisiting Research: Gifts of the Muse

Reframing the Debate about the Benefits of the Arts 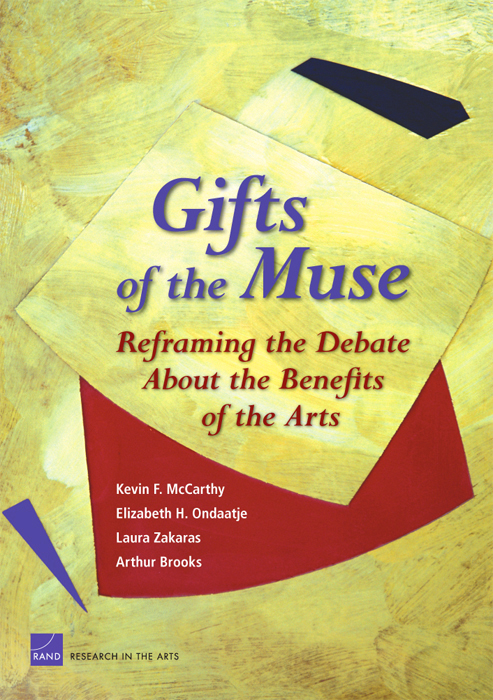 In 2004, as I was helping to launch a new funding program for a family foundation to support arts education, I encountered Gifts of the Muse. There had been an active — and familiar — debate among the foundation’s trustees about the need for arts programming: Was the foundation investing in arts education based on a belief in “arts for art’s sake” or in the instrumental benefits to young people who engage in the arts, such as enhanced self-esteem or educational outcomes? Gifts of the Muse seemed to provide a resolution to this debate about intrinsic vs. instrumental value: both are important.

The most novel aspect of the report is the framework it proposes for understanding the benefits of engagement in the arts. This framework sets up two axes, with one continuum between instrumental vs. intrinsic benefits and the other between private vs. public. For example, improved test scores sit in the quadrant of private instrumental benefits. This is a familiar argument for many in the arts education space. In the public instrumental space sits economic growth — again, a familiar argument about art-centered economic development. In the private intrinsic quadrant, there is “captivation” and “pleasure” on the part of the participant. Public intrinsic benefits include “creation of social bonds” and “expression of communal meaning.”

This last quadrant, public intrinsic benefits, is perhaps one of the most important theoretical contributions of Gifts of the Muse. Previously, the focus on intrinsic benefits implied the personal: it was about the pleasure and captivation an individual experienced from looking at a Michelangelo painting, reading Zora Neale Hurston, or watching Merce Cunningham perform.

The arts field’s growing interest in culturally relevant programming, especially within traditionally marginalized and disenfranchised communities, sits squarely within this fourth quadrant where the intrinsic and the public meet. This idea — that our field needs to consider more purposefully how what we offer is relevant to audiences — is certainly not new. However, there is increasing understanding that the challenges of engaging underserved audiences should be the domain not only of marketing, outreach, and education staff but also of artistic directors, curators, and other individuals who design and administer art programs. It is not simply that we must market existing arts programming to underserved populations, we must actually change the content of these programs to suit the needs of these populations.

While the authors of the report do not use the language of cultural relevance, they hint at this idea in their fourth and final recommendation: to “create circumstances for rewarding arts experiences.” Here, the report discusses the important role community-based organizations play in developing arts audiences and fostering arts participation because of their ability “to concentrate on arts experiences that are of particular interest to their communities.” It is important to emphasize, however, that Gifts of the Muse only hints at this idea. It does not explore the importance of the arts in instilling in us, individually and collectively, a sense of our relevance to the world.

A number of grantmakers today are working to take this idea of cultural relevance further. Through a lens of racial justice they are exploring the role the arts play in helping us see, understand, and reflect upon our world; create contextualized meaning; and connect to our cultural traditions. Such grantmaking focuses both on what and whom we are presenting in galleries, on stages, and in our various cultural spaces, as well as on what these artists are saying about our society. At its best, racial justice in the arts, in both form and content, addresses one of the longest-standing issues of our society: the role of constructed identity in contributing to inequality and inequity. What more relevant role can the arts play than to help us construct, deconstruct, and reconstruct identity in our society?

At this point, it is important to remind ourselves of why the report was written. The first three paragraphs of the report’s summary set up the context: “By the early 1990s . . . the social and political pressures that culminated in what became known as the ‘culture wars’ put pressure on arts advocates to articulate the public value of the arts.” Ostensibly, the report aims to articulate this value. Gifts of the Muse fails to achieve this goal for two reasons. First, its focus on what counts as “the arts” is too narrow. Gifts of the Muse seems to suggest that all arts participation is mediated through arts institutions. Although the report stated that community-based organizations have a role in the arts, this still implies a fairly limited set of venues in which the arts take place. Even at the time this report was written, the belief that people participated in the arts only through nonprofit arts institutions was not true. Eight years later, developments in technology have allowed for greater access to artistic experiences that are not mediated through institutions. As a funding community, our tool is blunt and our visible landscape looks only like 501(c)(3) organizations, whereas in reality the arts world is vastly more complex. We must continue to broaden our conception of what constitutes arts participation.

Second — and more important — the report fails to consider how exactly we might reverse the trend of disinvestment in the arts and “win” the culture wars. The report’s first recommendation, to “develop language for discussing intrinsic benefits,” assumes that a more cogent and forceful articulation of benefits will somehow unlock new public support (and funding) for the arts. This addresses the issue at a level at which the culture wars were not being fought. That struggle was not about what type of art should be funded by the public or what benefits the public should receive from the arts. Rather, it was about how we imagine our society more broadly and whether it should provide public support for the arts and, for that matter, many other public goods, including a social and economic safety net, protections for our environment, and an adequate education system.

Until the arts community sees itself in relation to these other fundamental issues in our society, we will continue to lose the “culture wars.” This is not new territory for the arts: we cannot imagine the civil rights movement, the gay liberation movement, and many other social justice movements without the arts; justice has always been the concern of artists. A network of new collaborations, under the banner of State Voices, has emerged in seventeen states, bringing together constituencies from diverse communities and issues. Through State Voices, advocates for the environmental, civil and voting rights, gay rights, education, health, human services, and many other causes are working together toward common goals. The arts community is noticeably absent. Perhaps this should change. A focus on racial justice might lead the way, because this lens understands that the inequities and inequalities we face in the arts are intimately connected to inequities and inequalities in education, health, and many other areas of society.