How Artists Build Careers across Commercial, Nonprofit and Community Work 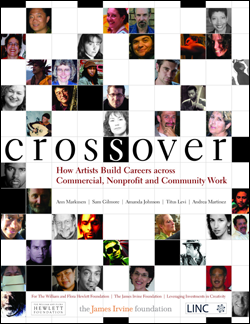 Crossover surveyed 1,800 Los Angeles and San Francisco artists about their careers and presented rich case studies from the field, showing that individual artists move fluidly across three sectors as they construct their careers. These three sectors are commercial, nonprofit, and community-based arts. The report revealed that 42 percent of respondents spent time in commercial artwork, 55 percent worked in nonprofit arts, and a staggering 69 percent dedicated time to community arts. The report also found that the majority of artists depended on the commercial sector for most of their arts income. These findings were confirmed by a 2010 report titled Los Angeles: America’s Artist Super City, which also found that rates of artists’ self-employment in Los Angeles were well over 50 percent.

Crossover also proved that artists assemble their careers by working across sectors despite the arts field’s biases about the value of those sectors. The report exposed persistent stereotypes within the arts, such as the perception that commercial artists are sellouts, nonprofit artists represent a purer vision of the art form, and community artists are amateurs or hobbyists. These biases are philosophical and deeply entrenched.
The recent conflict at the Los Angeles Museum of Contemporary Art is in part due to the hiring of a director from the commercial gallery world whose management decisions about staffing and exhibitions have been perceived as disregarding the museum’s legacy as a nonprofit cultural institution. The commercial stereotypes in this case have been pitted against the nonprofit stereotypes, instead of looking at the strengths of each sector and how they could be used to address the systemic issues of that organization. Unfortunately, this has been a lost opportunity for a more robust dialogue both about how commercially successful artists can serve the mission of a large nonprofit organization and about how fiscal stability can be achieved through increasing donor prospects and individual giving.

In Los Angeles at least, and likely other areas as well, progress is being made in creating systems that can facilitate crossover in artists’ careers. For example, aside from transcending stereotypes, the report found that one of the greatest barriers to artists moving between sectors was individuals’ access to resources and training. Many working artists are proficient in their art form but need additional training to prepare them for working within the business structures of both commercial and nonprofit organizations. Internship programs are a terrific way to provide artists with this training, but frequently these opportunities are unpaid. This leaves a large population of artists unable to participate because of the financial strain it would cause. In 1999, the Los Angeles County Arts Commission created the Arts Internship Program, a paid summer internship program that attempts to address this problem. The intention is to develop artists’ skills for serving as board members, volunteers, or even staff in nonprofit arts organizations that provide cultural services to Los Angeles County residents. The program is presented in collaboration with the Getty Foundation’s Multicultural Undergraduate Internship Program, which supports multicultural internships to museums and visual arts organizations. Combined, the Getty and LA County programs comprise the largest paid arts internship program in the United States, with 4,011 total alumni.

The value of this internship opportunity and training for the individual, the host organization, and the field is indisputable. A paid internship program for artists early in their careers should especially be replicated in commercial enterprises to fully address many of Crossover’s recommendations for removing education and training barriers. When artists have hands-on experience in an office or business setting, they are better able to transition those skills between multiple kinds of working environments, creating the possibility of working cross-sector.

Crossover’s findings offer a snapshot of specific Northern and Southern California artists at one moment in time. Recognizing that the universe of a population of artists working across disciplines is by its nature changing and fluid, it may be fruitful to consider future research in a way that would allow calculation of a response rate and a plan for revisiting the same or similar pool of respondents in a few years.
Future research efforts on artists’ working habits might investigate whether or not the 2008 recession has impacted artists’ ability to cross over. In 2009, community artists’ employment was addressed by the report Survey Results about the Effects of the Economic Recession on the Folk and Traditional Arts: 2008–2009, which found that traditional artists were increasingly turning to outside work for income. Specifically, “82 percent of artists report a decrease in overall income; 65 percent report a decrease in demand for services, which represents the single most important source of income for artists; and 37 percent are seeking work outside area of specialty.”
Similarly, although Crossover touches on existing stereotypes and artists’ abilities to transcend them, the arts field has not looked closely at how to break down the sector stereotypes. There is an untapped opportunity to learn from these crossover artists how they are able to move between different work environments and philosophies without becoming mired. A focus on dissolving the philosophical tensions within the larger arts field would be an excellent step toward improving crossover opportunities.

Crossover covers the Bay Area and Los Angeles County, two decidedly culture-rich, tourist-attracting, creative, and urban areas. Future research focused on other cities and rural areas across the country could produce especially meaningful findings for diverse populations and locations. For example, Indianapolis has a strong arts community and infrastructure. How are artists making a living and working across sectors in Indianapolis? Do different regions or populations have different patterns of crossover than were found in the California report? Findings from such research would be especially helpful in assisting artists to determine job prospects and identifying sector strengths as they build their careers.

From this report we know how pervasively artists move from sector to sector. We also know the importance of the various support systems needed to encourage and foster greater opportunities for successful cross-sector work. It is also clear that there is a tremendous opportunity to focus on erasing the divisive stereotypes within the arts field. Crossover is the start of a conversation concerning artists’ professional needs and offers some important insights into how individuals build careers across the nonprofit, commercial, and community sectors.