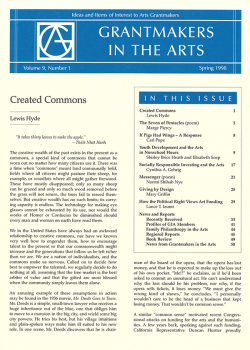 People are betting on the renewal of Washington D.C. Without doubt, Washington is struggling with profound structural, financial, and governance challenges including the lack of voting representation in Congress. However, another District story is starting to be told — the story of the District as the home of thousands of dynamic and effective nonprofits and others who are renewing neighborhoods, investing in families and cultural life, and bringing life and leadership to the District. Many are learning what is right about the District and taking responsibility for its success both as the nation's capital and as a community in its own right.

Major new investments by the President and Congress, national and local foundations, and business leaders have recently been made that will help secure the future of Washington. Today, three years after being on the brink of bankruptcy, the District's government has returned to financial solvency with a clean 1997 audit, a budget surplus for 1998, and an improved Moody rating. While the District continues to lose population — though at a slower rate than previously and with some indications of reverse migration — the region's economy is booming. Once employment was government dominated; today 61 percent of residents in the District and 76 percent in the metropolitan region work in the private sector. The Washington metropolitan region is second only to Silicon Valley for its concentration of technology workers in the overall workforce, with 75 percent of global Internet transactions passing through the region. Unemployment is at a twenty-four year low — 3.3 percent — and the number of jobs created since 1993 (40,655) is outpaced only by Atlanta and Phoenix. A strong sense of optimism and real momentum is underway.

National and local leaders are convinced that all U.S. residents have a stake in building a strong and successful capital city. These leaders have begun to invest time, influence, and resources to create a renaissance in the nation's capital. The D.C. Heritage Tourism Coalition, a fifty-six member consortium, has been formed to bring tourists and economic development to rarely-visited neighborhoods to hear the stories — particularly the rich intellectual and cultural heritage found in African American communities — that have been written in this city. The World Bank — D.C.'s third largest employer — has made a commitment to help the District deal with its most pressing economic problems through an expanded program of volunteer assistance focusing on public education and the quality of municipal services. The 1997 National Capital Revitalization and Self-Government Improvement Act fundamentally restructured the relationship between the federal and the District government, relieved the District of major financial burdens, and created new programs to strengthen its economic base.

In August 1997, the Metropolitan Washington Airports Authority unveiled the “New National” airport — a $1 billion, one million square-foot facility designed by architect Cesar Pelli that includes thirty artworks with floor mosaics, railings, window friezes, murals, and sculptures by local and national artists. In September, the Washington Redskins football team moved into the new $180 million Jack Kent Cook Stadium and in December the new $200 million MCI Arena opened, bringing NBA and Georgetown University basketball, hockey, and other attractions to the heart of downtown Washington. The Arena anchors the city's new downtown Business Improvement District, a 120-block area where merchants and the General Services Administration have taxed themselves to the tune of $37 million a year to pay for such things as clean-up, security service, people to provide information for visitors, and programming to create a lively and attractive destination for residents and visitors. The Downtown Arts Committee has been meeting to coordinate an infusion of visual and performing arts facilities, programming, and financing mechanisms to support arts and heritage activities in the District's historic central city.

While the District has the highest density of public charities in the nation, one in five are national and international nonprofits devoted to effective government and public affairs and policy. The District's nonprofit sector that addresses the community's own assets and challenges is also vibrant. While the majority of community-based nonprofits are small, with budgets of less than $500,000, they are addressing problems, creating opportunities, and having success. Nearly thirty nonprofits, many founded in the 1960s and 1970s, are currently running capital campaigns to secure permanent facilities with announced goals that collectively total $1.2 billion. Another forty-six nonprofits are planning capital campaigns. Arts and humanities organizations lead this trend. Active campaigns range from $200 million for the Washington Opera's downtown opera house to $1.5 million for the Liz Lerman Dance Exchange's new Takoma Park home.

Levine School of Music is completing its $9 million campaign and has moved into a wonderful hilltop Renaissance-style villa overlooking the city. (The school will be the site of the GIA members reception during the Council on Foundations conference.) The Washington Ballet recently completed its $3.6 million campaign, doubled its rehearsal and classroom space, and strengthened its endowment. Studio Theatre is helping to bring back to life 14th Street — the once-bustling commercial corridor destroyed after the riots following the death of Martin Luther King, Jr. This year Studio, one of Washington's premier venues for contemporary theater, unveiled its $5.5 million renovation of a historic automobile showroom as a theater and school complex. Studio's complex includes two 200-seat theaters to satisfy subscriber needs and to take advantage of extended runs when they have a hit. No sooner had their new theaters opened, when Studio announced a $2.5 million endowment campaign — the last phase of its Campaign to Secure the Future. Other theaters are planning or implementing similar efforts: Arena Stage (soon to celebrate its 50th anniversary), Shakespeare, Woolly Mammoth, Source, Folger and Signature. A capital campaign is also being planned by Dance Place, Washington's center for contemporary and ethnic dance.

In July, the $2.6 million African American Civil War Memorial, designed by sculptor Ed Hamilton of Louisville, Kentucky, will be unveiled at Tenth and U Streets — the historic heart of the District's African American community. The memorial will serve as a tribute to the valor of the 208,000 U.S. Colored troops who served in the Union forces and fought for freedom during the civil war. Next, the organization plans to build a $4.5 million Family Heritage Center, a museum and tourist center with civil war artifacts, research center/library, and a computerized civil war genealogical database operated by the National Archives. To be located across the street from the Memorial, the new center will revitalize the U Street corridor and increase cultural tourism in this historic African American neighborhood.

When you come to Washington to attend the Council on Foundations (or any other time) take advantage of the opportunity to explore and experience the richness of D.C.'s neighborhoods and nonprofits. Members of the Washington Regional Association of Grantmakers would be happy to be your guide.