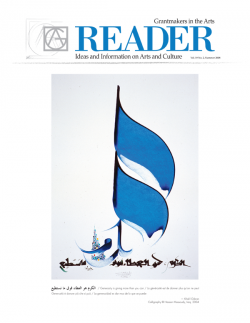 Public Funding for the Arts: 2008 Update

The three primary sources of government support for the arts in the United States are federal appropriations to the National Endowment for the Arts, legislative appropriations to the nation’s state arts agencies, and direct expenditures on the arts through county and municipal governments. In 2008 state appropriations and local expenditures experienced modest growth (3% and 5%, respectively) while appropriations to the National Endowment for the Arts grew by 16%. Combined, these three public funding streams account for $1.4 billion in arts support, about $4.52 per capita. Public sector grantmakers use these funds to support a wide array of arts activities, artistic disciplines, public participation initiatives and institutional grantees to encourage community creativity and make the arts highly accessible to the public.

Congressional funding for the National Endowment for the Arts increased by $20 million in 2008 — the largest increase in nearly 30 years. The current funding level of $145 million, however, is still lower than the 1992 appropriation of $176 million. State and local spending on the arts is recovering after sharp contractions in the economy forced government funding cutbacks across many policy areas between 2001 and 2004. Although the long-term growth in total public funding is a notable achievement in a competitive fiscal environment, government arts support at all three levels has been challenged to keep pace with the costs of living and doing business. Despite recent increases, only state arts agency appropriations currently exceed 1992 funding levels when adjusted for inflation.

Although lawmakers braced for slowed revenue growth in 2008, many revenue projections did not anticipate the U.S. housing market slump, which forced many governments to decrease spending projections mid-year. There are also long-term concerns about tax structures and the inexorable escalation of health care, retirement and education costs. Combined, these trends suggest that all discretionary public spending — arts or otherwise — will remain squeezed in the years ahead. Public sector grantmakers continue to underscore the need for vigorous advocacy from citizens, the cultural community and private sector leaders. All of these voices are needed to help elected officials understand support of the arts as sound public policy that returns multiple benefits to our cities and towns, our states and our nation.

Source: Angela Han, director of research, National Assembly of State Arts Agencies (NASAA). This profile draws on local spending estimates from Americans for the Arts, NASAA’s Legislative Appropriations Annual Survey, Fiscal Year 2008 survey, and information from the National Endowment for the Arts. Constant dollar adjustments for inflation are calculated using Bureau of Labor Statistics Consumer Price Index (CPI) figures with a base year of 1992, the year of highest federal funding for the National Endowment for the Arts. Per capita calculation is based on July 1, 2007, population estimates from the U.S. Census Bureau.