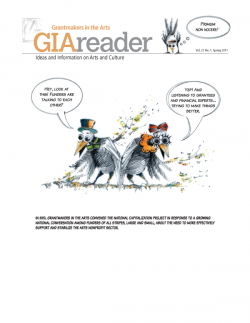 A Good Economist Knows the True Value of the Arts

Many people underestimate the contribution disease makes to the economy. In Britain, more than a million people are employed to diagnose and treat disease and care for the ill. Thousands of people build hospitals and surgeries, and many small and medium-size enterprises manufacture hospital supplies. Illness contributes about 10 per cent of the UK's economy: the government does not do enough to promote disease.

Such reasoning is identical to that of studies sitting on my desk that purport to measure the economic contribution of sport, tourism and the arts. These studies point to the number of jobs created, and the ancillary activities needed to make the activities possible. They add up the incomes that result. Reporting the total with pride, the sponsors hope to persuade us not just that sport, tourism and the arts make life better, but that they contribute to something called "the economy."

The analogy illustrates the obvious fallacy. What the exercises measure is not the benefits of the activities they applaud, but their cost; and the value of an activity is not what it costs, but the amount by which its benefit exceeds its costs. The economic contribution of sport is in the pleasure participants and spectators derive, and the resulting gains in health and longevity. That value is diminished, not increased, by the resources that need to be diverted from other purposes.

Similarly, the economic value of the arts is in the commercial and cultural value of the performance, not the costs of cleaning the theatre. The economic perspective does not differ from the commonsense perspective. Good economics here, as so often, is a matter of giving precision to our common sense. Bad economics here, as so often, involves inventing bogus numbers to answer badly formulated questions.

But good economics is often harder to do than bad economics. It is difficult to measure the value of a Shakespeare play: you can start with the box office receipts, but this is only the beginning of the story. Adding up the actors' wages does not help. Changes in relative prices since the time of Verdi mean that grand opera is now very expensive to perform. The relevant economic questions are whether the cultural and commercial value of the performance offsets these costs and whether these benefits can be translated into a combination of box office receipts, sponsorship and public subsidy. The appropriate economic criterion, everywhere and always, is the value of the output.

But bad economics has been allowed to drive out good. I am sympathetic to the well-intentioned people who commission studies of economic benefit, though not to those who take money for carrying them out. They are responding to a climate in which philistine businessmen assert that the private sector company that manufactures pills is a wealth creator, but the public sector doctor who prescribes them is not. Extolling the virtues of manufacturing, they value the popcorn sold in the interval, but not the performance of the play, arguing that the vendor of consumer goods creates resources, which the subsidised theatre uses up. People who work in the theatre, hospitals or education are often forced to listen to this nonsense. It should be no surprise that so many of them despise business and the values such business espouses. If these values were truly the values of business they would be right to despise them.

The surveys on my desk are expensively commissioned because their sponsors perceive a language they detest and do not understand. We need to put out of our minds this widely held notion that there is such a thing as "the economy," a monster outside the door that needs to be fed and propitiated and whose values conflict with things — such as sports, tourism and the arts — that make our lives agreeable and worthwhile. Activities that are good in themselves are good for the economy, and activities that are bad in themselves are bad for the economy. The only intelligible meaning of "benefit to the economy" is the contribution — direct or indirect — the activity makes to the welfare of ordinary citizens.