An Update on Foundation Trends 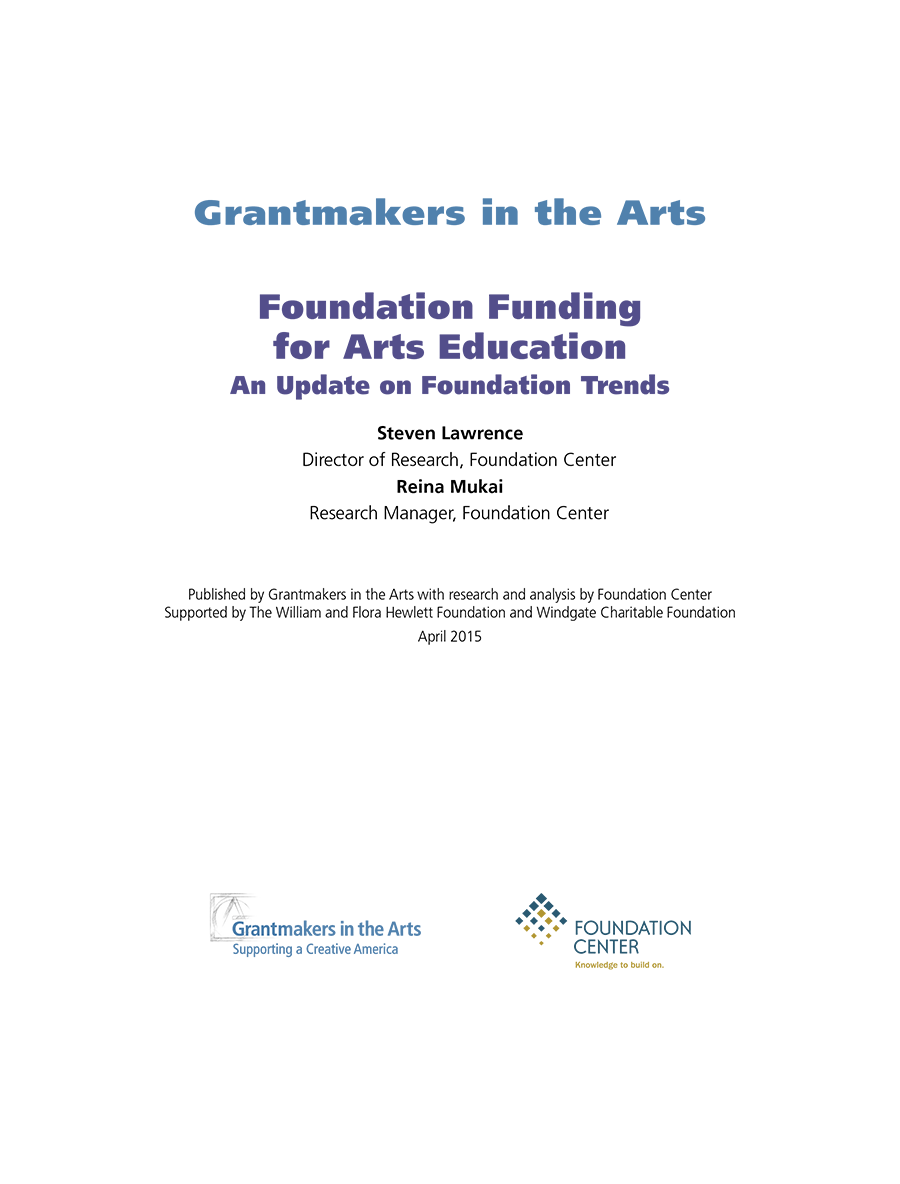 Arts education provides the means for sharing beautiful and provocative ideas and images, cultural and political knowledge, and insights about humanity across generations. In a world that grows ever more populous and competitive, arts education also offers a means for nurturing the creative thinking that will ideally lead to better solutions to the world’s many challenges.

Since 1999, this country has experienced an unprecedented economic boom, a stock market downturn and recession, economic recovery, a major economic crisis, and another economic recovery — albeit slow and uneven. Despite these dramatic swings, giving for arts education by funders included in Foundation Center’s annual grants set (see “Sampling Base” for details) rose 57 percent, from $193.7 million in 1999 to $304.4 million in 2012. (Adjusted for inflation, arts education giving rose 14 percent.) This rate of growth was slower than the increase in overall foundation giving recorded during this period but on par with growth in arts funding overall. As a result, arts education’s share of total arts funding remained steady at just over 14 percent. By number of grants awarded, arts education support grew 49 percent during this period, from roughly 2,500 to over 3,700 grants.

While giving for arts education increased between 1999 and 2012, growth was not consistent throughout this period. Arts education grant dollars grew steadily between 1999 and 2005, and this growth accelerated between 2006 and 2008. Grant dollars for the field peaked at $410.2 million in 2008, provided through 4,027 grants. In the first full year of the Great Recession, however, funding for arts education declined 28 percent. It then rebounded slightly in 2010 before slipping an additional 3 percent in 2011. The arts education field returned to strong growth in funding in 2012, when grant dollars increased a robust 18 percent.

Among the largest funders of performing arts education were the Robina Foundation (noted above) and the Karsh Family Foundation, which gave $9.1 million through two grants, the majority of which was awarded to Duke University’s Karsh International School for its endowment and the Jazz Loft Project.1 The third-ranked Herb Alpert Foundation provided $3.6 million nationally to performing arts education institutions, followed closely by the Colburn Foundation, which also gave $3.6 million in grants mainly to Los Angeles area–based performing arts institutions. Several foundations targeted arts education programs for underserved or minority youth. For example, the Prudential Foundation awarded $220,000 to the Alvin Ailey Dance Foundation (NY) for AileyCamp Newark and AileyDance Kids Newark, an organization dedicated to using dance to enhance the lives of underserved children.

The Arkansas-based Windgate Charitable Foundation was the largest funder of multipurpose arts education programs. Windgate awarded $6.6 million across 39 grants, including a $2 million award to the Penland School of Crafts (NC), an international center for craft education; and a $1 million grant to Boston-based North Bennet Street School, a trade and craftsmanship school for new facilities. The second-ranked William and Flora Hewlett Foundation provided $4.5 million, including $1.1 million to the California County Superintendents Educational Services Association for the Reinvigorating Arts Education in California project. Other leading funders of arts-in-the-schools and arts and education programs included the Wallace, A. W. Mellon, Kresge, and Surdna Foundations and the Houston Endowment.

Visual arts education, which includes multipurpose visual arts programs and centers and those with a single focus, such as photography or sculpture, received 14 percent of arts education dollars in 2012. This area accounted for the third largest share of arts education dollars and grants. Several of the biggest visual arts education grants provided capital support — including the largest grant, a $5.6 million award by the Donald W. Reynolds Foundation to the University of Arkansas for the construction of the Steven l. Anderson Design Center. Many of the grants were awarded to colleges and universities for fine arts programs, to museums exclusively for visual arts education programming, and to visual arts education organizations benefiting children and youth. In the latter category, the Ford Foundation awarded a $446,529 grant to the Jakarta-based Kampung Halaman Foundation for the work of a national youth-led network to produce multimedia digital content, conduct online media campaigns, and strengthen youth leadership in local decision-making processes; the Surdna Foundation awarded $270,000 to the Maryland Institute College of Art for mentoring, support, and financial aid to high school students and visual art teachers engaged in intensive, summer residency studio art experiences that will increase skills for both college preparedness, teacher quality, and impact; and the James Irvine Foundation provided $185,000 to Big Draw LA, to hold a series of participatory public drawing events at traditional and nontraditional venues and to develop a mobile device application to engage younger audiences in creating and sharing their drawings. Also included in this subfield were grants to visual arts schools for tuition aid for young visual artists.

Funding for broad-based museum arts education declined between 1999 and 2012, and its share of arts education dollars fell from 20 percent to 6.9 percent. Contributing to this reduction were the two top museum arts funders in 1999: the Robert W. Woodruff and Ewing Marion Kauffman Foundations. The Woodruff Foundation reported substantially lower levels of giving for this purpose, while the Kauffman Foundation did not award any grants for this area in 2012. The share of number of grants also decreased, from 8.6 percent to 4.6 percent. The majority of support targeted general education activities, facilities, and resources of art museums. Grants also supported educational programs of general purpose, children’s, ethnic/folk arts, history, and specialized museums.3 Similar to other fields of arts education funding, a few of the very largest museum grants supported capital projects, such as the Champlin Foundations’ $250,000 grant to the Rhode Island School of Design to complete the Radeke building restoration project at the Museum of Art. Nevertheless, the vast majority of grant dollars and grants for museum arts education supported programming, including school-based programs. For example, 2012 grants included $150,000 in support from the Claude Worthington Benedum Foundation to the Children’s Museum of Pittsburgh to establish hands-on learning laboratories in museums, libraries, and classrooms in West Virginia and southwestern Pennsylvania; and PNC Foundation’s $100,000 grant for the Fernbank Museum of Natural History (GA) for a collaboration with the Robert Woodruff Arts Center (Young Audiences Woodruff) and Sheltering Arms Early Education and Family Center.

Funding for literary arts education accounted for 2.6 percent of arts education support in 2012, down slightly from the 3.1 percent share in 1999. Nonetheless, the number of grants awarded increased from 78 to 96 grants. Since even the largest funders of literary arts education reported, on average, 2 or fewer grants, this finding reflects an increase in the number of funders making grants. Within this subfield, the types of programs supported ranged from undergraduate and graduate literature programs to school- and community-based programs in poetry, literature, reading, and creative writing. Among the larger grants awarded for this area was a $896,000 award from the Andrew W. Mellon Foundation to Book Arts Press (VA) for the Andrew W. Mellon Fellowship of Scholars in Critical Bibliography; a $250,000 award from the Zell Family Foundation to the University of Michigan for the MFA Creative Writing program; and the Brown Foundation’s $80,000 grant to Writers in the Schools (TX) for in-school creative writing workshops and artist visits.

Finally, the number of organizations in the sample benefiting from arts education support jumped nearly 30 percent between 1999 and 2012, from just over 1,500 to more than 1,950. Nonetheless, the average number of grants received by organizations in 2012 — 2 grants — was unchanged from 1999. Some institutions, however, received far more grants. At the top of the list, the Kansas City Ballet Association received 28 grants, followed by the Juilliard School (21) and Children’s Theater Company and School (20).

Within their arts education giving, some foundations direct support to vulnerable or underserved populations, such as to specific ethnic or racial groups or communities of color in general and to the economically disadvantaged. This giving targets both subsets of children and youth — the predominant beneficiaries of arts education support — and others.

For example, the W. K. Kellogg Foundation made a $352,000 grant to Living Arts (MI) to improve literacy, academic outcomes, and school attendance for vulnerable children by providing support for the training of parents and teachers in arts-infused methodology, and making essential arts experiences available in the Vistas Nuevas Head Start Centers and schools of Southwest Detroit; and the James Irvine Foundation provided a $90,000 grant to Eastside Arts Alliance (CA) to develop a mural park, providing opportunities for low-income, Latino youth from East Oakland to create graffiti art murals.

Nearly a decade has passed since Foundation Center and Grantmakers in the Arts first studied foundation funding for arts education. That earlier examination noted that several newer foundations were showing an interest in arts education, which boded well for the field, and also that “Foundations have served as key proponents and supporters of arts education, and that role will likely expand in the years ahead.” Both predictions held true as arts education funding remained largely stable during a period markedly more volatile than was true of the preceding decades.

What comes next for arts education funding? Certainly, economic prospects appear healthier than in recent years, suggesting the potential for growth in overall arts education grantmaking. More critical to the future of the field, however, may well be the work of current arts education funders in continuing to engage a new generation of donors. The contributions of arts education to a creative and prosperous society are well documented. But these learnings may need to be translated in a way that engages donors who want to be more hands-on, see their priority as addressing specific populations, and may not immediately connect with how support for arts education can facilitate those goals. Arts education is a powerful resource for ensuring greater equity in society, and funders need only find the most resonant ways to make this case.

The information presented in this report is based on Foundation Center’s annual grants sets. Each set includes all of the grants of $10,000 or more awarded to organizations by 1,000 of the largest US foundations by total giving and represents roughly half of total grant dollars awarded by the universe of independent, corporate, community, and grantmaking operating foundations in that year. Specifically, the 2012 grants set included 153,821 grants totaling $22.4 billion; and the 1999 set included 81,112 grants totaling $8.6 billion. Grants to individuals and grants from donor-designated and restricted funds of community foundations are not included.

In this report, Foundation Center did not differentiate between in-school and out-of-school programs.

Capital Support and All Other Support

For the purpose of this report, grants have been separated into capital (buildings/facilities) and all other types of support (programmatic/administration/etc.).