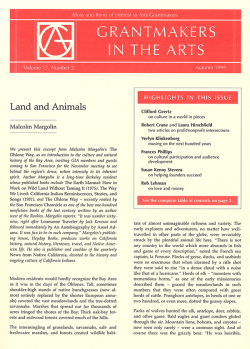 The Force of Curiosity

Edited, and with interviews by, Irene Borger

"Somewhere between tête-à-tête and performance” is the way Irene Borger, program director of the CalArts/Alpert Award in the Arts, describes the interviews with twenty award recipients that are featured in this volume marking the program's fifth anniversary.

The award, inaugurated in 1994, provides annual fellowships of $50,000 to five “early mid-career” artists, one each in the fields of dance, film/video, music, theater and the visual arts. Honorees are “likely to be recognized within their discipline as artists shaping a vital, voice, vision or language.” It is that “voice, vision and language” Borger explores in her wide-ranging interviews that probe everything from sources of inspiration to reflections on everyday living, from communicating with audiences to the impact that race and gender have on an artists' work. The book is aptly titled The Force of Curiosity, reflecting both Borger's insightful questions as well as the curiosity and creativity of the artists interviewed.

Borger carefully sets the stage for each of her interviews, describing the setting — whether it be a rooftop garden with the conversation punctuated by fire engine sirens or a crowded Japanese restaurant in San Francisco's Mission District — and something of the circumstances of the meeting. Borger is a skillful interviewer, sometimes offering just a brief observation, not even a question, which results in a half a page or more of insightful comments from an artist. The back and forth dialogue is interspersed with photographs, drawings, diagrams, musical notations, handwritten lists, and even calendar pages filled with scribbles, adding another dimension of creativity to the discussion. As she points out in a forward to the book, there is “no single template” for the interviews, the flow and the substance are determined by the artists, often reflecting their art form and their approach to their work.

“The Force of Curiosity” is a 556-page book, but don't be put off by its heft — each thought-provoking interview stands on its own, and the interviews can be read almost as if they were short stories, linked by the common threads of curiosity and creativity. A compact disc featuring music of four of the award winners is an added bonus.