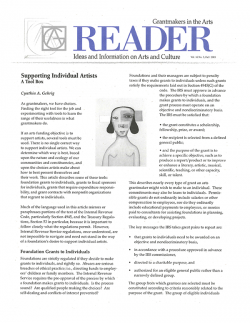 On March 1, 2005, the first convening to share the findings of Deep Focus: A Report on the Future of Independent Media was held in San Francisco, the geographic community studied for this project1. Under the direction of Co-directors Helen De Michiel and Jack Walsh at the National Alliance for Media Arts and Culture (NAMAC) and authored by Andrew Blau of GBN (Global Business Network), the study's purpose was to help the independent filmmaking community "prepare for a future likely to be quite different from the present." Whether or not you fund media, this report is relevant, for the changing conditions described in this document are applicable to the art field as a whole.

The audience for the meeting - primarily independent producers, Bay Area media arts organizations, funders, and others - came to hear what experts from computer, radio, and film worlds had to say about the findings and recommendations of the report. In discussing the rapidly changing media environment, the overriding theme expressed was that of opportunity - that there are not only challenges but also significant opportunities for independent filmmakers in the new digital era.

At LEF, I learned about the study two years earlier at GIA's 2003 annual conference in Seattle. The project was developed a year earlier by the Independent Initiative, a consortium of San Francisco nonprofit media organizations (Bay Area Video Coalition, Film Arts Foundation, Independent Television Service, KQED, NAMAC, and National Asian American Telecommunications Association) in collaboration with GBN. The organizations recognized the need to be less reactive and take a more "imaginative and bold approach" to analyzing and adapting to the changing conditions of the independent media field. Understanding the national relevance of this work, the Rockefeller Foundation, the MacArthur Foundation, the Tides Foundation, and the San Francisco Foundation provided funding for the two-year exploration, including workshops and expert interviews, that led to Deep Focus.

The research, observations, and recommendations that would grow out of this endeavor were especially interesting to me because LEF had begun a similar exploration of the independent media community in Boston. For over ten years, LEF has funded the work of independent filmmakers in New England and deepened its commitment in 2001 when it launched the Moving Image Fund, which has distributed a total of $1 million over the past four years. While its primary commitment is to funding independent filmmakers, we understood that LEF's support of individual projects is part of a larger infrastructure, and that the picture of this terrain is rapidly changing. In the same manner as in San Francisco, the Boston media arts community was identifying and anticipating the profound shifts occurring in its field.

Beginning in the spring of 2003, LEF convened key media arts organizations - the Center for Independent Documentary, Filmmakers Collaborative, WGBH/Boston Media Productions, Color of Film Collaborative, and Central Productions - to share, reflect, and build their practice of providing production support to independent producers. When it was released in January 2005, Deep Focus gave the LEF work in Boston an immediate, and more startling context: the question was not going to be about working harder, fine-tuning current practices, or finding more capital to support existing work. As GBN's "unflinching assessment" of the field makes evident, the work was going to have to be about transformation, about working in completely new ways.

A brief summary of the key environmental characteristics and the core recommendations embedded in this document reflects the scope of the shift needed.

In the new media environment, with its steady migration of producers and consumers to digital formats and internet-based platforms, motion media will become increasingly pervasive. As costs for basic production fall and the number and range of distribution platforms grow, the overall media environment will also become more noisy and competitive. With consumers able to exert more control over what they choose to watch, the dynamics of the field will become inverted and audiences more fragmented as markets organize according to content in ever-smaller niches. Finally, the advent of niche-oriented media combined with these other forces means the field will also reorganize financially. Rather than only pursuing the traditional combination of government, foundation, and corporate support, independent producers are also developing ways to cultivate support from individuals and other community sources that emerge from grassroots movements and the internet.

Despite these challenging shifts, however, the report researchers believe that independent media makers are entering an era of unprecedented opportunity. The report urges media artists and nonprofit media centers to "wade into the expanding market" and find opportunities to apply their unique vision and skills without sacrificing the values that have long defined their work. To do this successfully, independent media artists and nonprofit organizations must be willing to re-imagine their relationship to the viewer and "rethink the [traditionally] communal experience of watching media." They must also be willing to "redefine the meaning of success" and recognize that success can be found in small, niche audiences and measured in cultural influence rather than economic gain. Finally, GBN's researchers suggest that independent media makers will also need to "reorganize funding streams" in order to capture and create innovative opportunities for supporting their work.

This report was not produced to sit on a shelf. "Grounded in the pragmatic conditions of the environment" in which they work, it was generated by practitioners for use by practitioners. NAMAC Co-Director Helen De Michiel indicated that some of the changes forecasted in the report, such as the upsurge in broadband motion media distribution, are already becoming accepted practice. In the year since its release, the report is already a frame of reference for a national conversation and provides the means to talk about changes that people knew were key to thriving in the future but were grappling to define.

NAMAC continues to host meetings to share Deep Focus around the country. Through these, NAMAC invites others to take action in response to the research and GBN's "scenario planning" process (2), and to envision the future of independent media. Boston's vibrant independent community, steeped in a rich history of documentary filmmaking, is eager to address the environmental and generational changes that are upon us. With a constant stream of young, creative producers and the rapid development of new technologies, there is a great opportunity for Boston to be part of shaping the future of independent media. The Deep Focus report is already being used as a blueprint.

2. Global Business Network is known for its use of "scenario" thinking, a planning tool that combines research and inquiry to identify possible futures and corresponding challenges and opportunities. In introducing the March 2005 gathering, moderator John Killacky (program officer at the San Francisco Foundation), commented that he sees value in applying this strategic planning tool to other artistic fields. In addition to its intended use as a working document for the independent media community, Deep Focus provides an excellent overview and self-guide to scenario planning that funders and media practioners alike will find informative and useful.