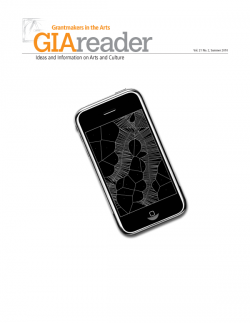 If you ever read information online or download and print materials from the Internet, you are part of the “digital divide.” While most, if not all, members of philanthropic organizations in the United States may take for granted high-quality access to the Internet, many people of color, indigenous people, and people living in rural areas have none or only very limited ability to use computers and gain access to the kinds of information and education that can improve their lives.

Recognizing these gaps in services and opportunities, in 2009 the US Congress mandated the Federal Communications Commission (FCC) to develop a plan for increasing broadband access across our country. As defined by the FCC, “broadband” refers to high-speed Internet access that is always on and faster than traditional dial-up services. In March of this year, the FCC presented a 376-page, ten-year National Broadband Plan: Connecting America (Broadband.gov).

In April, however, a US Court of Appeals ruled that the FCC could not intervene in a case against Comcast, a high-speed Internet, cable, and phone service provider, calling into question the commission’s regulatory authority over the Internet, telecommunications companies, and broadband access and practices. Simply stated, the question concerning the FCC’s legal regulatory authority revolves around whether broadband is an information service or a telecommunications service. The FCC has little regulatory power over the former but a lot over the latter.

In May, the FCC presented a new plan that it calls “the third way” between “light” and “heavy” regulations. A key factor in this plan is “network neutrality,” often shortened to “net neutrality,” meaning that Internet service providers cannot discriminate between different kinds of content and applications online and that consumers have the right to use any equipment, content, and applications or services. So multiple debates are now taking place on the Internet and in print about the proper role of the FCC and whether or not the American people should have guaranteed rights to the benefits of broadband.

As part of these debates, the New York–based Center for Social Inclusion (CSI), a project of the Tides Center, has issued a document titled “Broadband Equity Today” (centerforsocialinclusion.org/publications). The talking points listed in this brief publication call for national investments in broadband infrastructure that build equity and opportunity where it is needed most. A key point states that because “broadband is now indispensable for almost every facet of society,” including health care, education, economic development, and civic engagement, “poor communities and communities of color must not be left behind.” Other points demonstrate how these communities are being left behind now. For example, while 69 percent of American households have broadband at home, only 59 percent of African American households and only 49 percent of Latino households have it.

The Center for Social Inclusion argues that the nation cannot depend on the large for-profit telecommunications companies to expand the broadband infrastructure. Over the last decade, the United States fell from fourth in the world in terms of digital access to well below the top twenty countries whose national governments have made it a priority. CSI believes that a plan for true broadband equity would have to go beyond net neutrality and create a Universal Service Fund similar to what already exists for telephone service to help poor families pay for high-speed service. Racial equity is again a key factor because “people of color as a group are less likely to be able to afford the cost of high-speed Internet.”

CSI also points out that “we can’t say for sure who has access and who doesn’t because the data doesn’t exist.” Broadband data is collected by zip code, and if even one address receives broadband the whole zip code is counted as having service. If the FCC could require telecommunications companies to report the total number of subscribers by zip code, there would be a clearer picture of who has broadband access and who does not.

To address these inequities, CSI calls for “a social venture model that gets low-cost access to poor communities and communities of color,” and the investment of public dollars in local efforts to expand broadband infrastructure. When stimulus money and other federal funds are distributed, community applications should receive equal consideration or a higher priority in areas where no large companies are investing.

Because less than half of rural adults have access to broadband in their homes, the Center for Rural Strategies (CRS), based in Whitesburg, Kentucky, has also launched a Broadband Project (ruralstrategies.org). Focusing on improving rural communities through creative uses of media and communications, CRS points out that broadband is a necessity, not a luxury. CRS maintains that the Internet is crucial to all people’s participation in economics, education, and civic life. CRS has established a Rural Broadband Policy Group that is working to make increased diversity in broadband media a higher national priority and looking for ways to find and support local ownership and investment opportunities. The National Rural Youth Assembly, which met in April, pointed out that accessible broadband services “play a large role in young people’s decisions to stay, leave, or return to their communities, and ultimately have profound, long-term consequences for local economies (ruralassembly.org/working-groups/youth).

Formed in 2004, Native Public Media (NPM) (nativepublicmedia.org) seeks to strengthen and expand Native American media capacity and empower a strong, proud Native American voice. In November 2009, NPM released an important report written by Traci L. Morris and Sascha D. Meinrath, New Media, Technology and Internet Use in Indian Country: Quantitative and Qualitative Analyses. The report demonstrates that “despite a lack of access, higher prices for broadband and often non-existent infrastructure,” Native American leaders “have developed a vision and built self-sufficient networks and community technology centers to connect and strengthen their Native communities.” The report cites, for example, five “telehealth centers,” virtual clinics providing primary care to residents of the Leech Lake Indian Reservation in north-central Minnesota. NPM sees new opportunities ahead to bridge the historical and persistent Native American digital divide and points out that “Native involvement and participation in the Internet and related technologies is critical to the digital health of Native nations.”

Some advocacy organizations maintain that broadband access is a social justice issue. The Media Action Grassroots Network (MAG-Net), for example, “is a local-to-local advocacy network of grassroots social justice, media, and cultural organizations working together to shift power relations for social change through the critical use and transformation of media and communications systems.” MAG-Net’s Campaign for Connected Communities “seeks to advance a media policy agenda that connects people of color and the poor from rural, urban, and struggling suburban communities politically, culturally, and technologically” (mag-net.org/campaigns).

Leaders of these and other advocacy organizations maintain that philanthropic investments are crucial to extending the benefits of broadband to communities of color, rural people, and tribal areas. Dee Davis, president of the Center for Rural Strategies, for example, says that both public and private philanthropists should be engaged, because “access to broadband is fundamental to American people in the 21st century in the same way as electricity and telephones were in the 20th century.” Arts and culture funders, in particular, should support policies ensuring equal access to Internet services, because “without broadband access, rural people cannot create, build and share their arts and culture or actively participate in the creative economy.”

While advocacy organizations are taking strong stands, should philanthropy play a role in the current debates about the digital divide and broadband equity? Alyce Myatt, GIA member and executive director of Grantmakers in Film + Electronic Media (GFEM), says yes!

In April, GFEM published a new report titled Funding Media, Strengthening Democracy: Grantmaking for the 21st Century. The report shows that in a recent twelve-month period, commercial investment in media outstripped philanthropic dollars by 400 to 1. This means that commercial companies can control content and delivery of information and opportunities with an eye to profit rather than considerations of community or social betterment. Alyce Myatt also points out that by funding media, philanthropic organizations can create greater transparency and the possibilities of more collaborations in their own operations.

Myatt further argues that arts and cultural funders should be particularly aware and engaged in policy relating to broadband access. “Regardless of how a work of art or a performance is ultimately experienced by an audience,” she points out, “at some stage of its creation and/or distribution it will likely transverse electronic media; whether as a sample sent to a prospective curator, or as a reference copy cached for future review, or as a piece of digital art. Therefore, all arts funders must be actively aware of how art gets from the artist to the curator to the audience in the digital age.”

Judi Jennings is executive director of the Kentucky Foundation for Women.