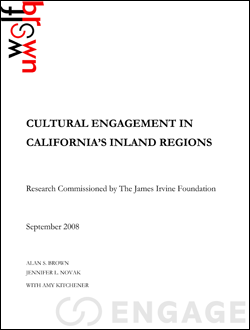 This report investigates patterns of cultural engagement in two rapidly-growing and racially diverse regions of California, the San Joaquin Valley and the Inland Empire, which together account for nearly 8 million people. The research was commissioned by The James Irvine Foundation to develop a broader, inclusive definition of cultural engagement, to take stock of patterns of engagement in the two regions, and to gain a sense of how it might support culture in these areas more equitably and more effectively. Two major data collection efforts were undertaken. The first was a door-to-door intercept survey of over 1,000 randomly-selected households in six distinctly different neighborhoods. The second was a self-administered survey of over 5,000 residents of the two regions, promoted as the “California Cultural Census” and conducted both online and through intercept work at various locations and events. Results paint a detailed picture of the breadth and depth of cultural engagement in the two regions and reveal a rich tapestry of activity in music, theatre and drama, reading and writing, dance, and visual arts and crafts – much of which occurs ‘off the radar map’ of the traditional nonprofit infrastructure of arts organizations and facilities. The study identifies specific types of activities which, if supported at higher levels, might equitably raise participation levels and achieve higher levels of cultural vitality in millions of homes and hundreds of communities, and concludes that cultural providers and funders must look deeper into the fabric of their communities for new partners, new settings and innovative approaches to drawing residents into cultural experiences.