The Arts and Human Development

Framing a National Research Agenda for the Arts, Lifelong Learning, and Individual Well-Being

The Arts and Human Development (2.4Mb) 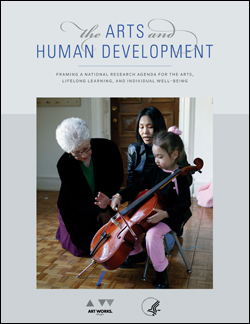 Human development describes a complex web of factors affecting the health and well-being of individuals across the lifespan. Together, these factors yield cognitive and behavioral outcomes that can shape the social and economic circumstances of individuals, their levels of creativity and productivity, and overall quality of life.

Increasingly in the 21st century, U.S. policy leaders in health and education have recognized a need for strategies and interventions to address “the whole person.” They have urged a more integrated approach to policy development—one that can reach Americans at various stages of their lives, across generations, and in multiple learning contexts.

The arts are ideally suited to promote this integrated approach. In study after study, arts participation and arts education have been associated with improved cognitive, social, and behavioral outcomes in individuals across the lifespan: in early childhood, in adolescence and young adulthood, and in later years. The studies include:

This emerging body of evidence appears to support a need for greater integration of arts activities into health and educational programs for children, youth, and older adults. Yet further research is necessary so that policy-makers and practitioners can understand the pathways and processes by which the arts affect human development, thereby enhancing the efficacy of arts-based practices in optimizing health and educational outcomes for Americans of all ages.

On March 14, 2011, the National Endowment for the Arts (NEA) in partnership with the U.S. Department of Health and Human Services (HHS) hosted a convening in Washington, DC to showcase some of the nation’s most compelling studies and evidence-based programs that have identified cognitive, social, and behavioral outcomes from arts interventions.

Secretary Sebelius declared a mutual goal for the convening agencies: “We hope this meeting leads to deeper collaboration in research and in identifying new ways to engage the arts to improve people’s lives.” Similarly, Chairman Landesman asked: “How do the arts help build us as a people and as individuals?” The NEA and HHS, he said, “share a fundamental mission—how to improve the quality of life.”

The resulting white paper proposes a framework for long-term collaboration among the NEA, HHS, and other federal agencies to build capacity for future research and evidence-sharing about the arts’ role in human development. A worthy aim of that collaboration is to foster data-driven models for including the arts in policies and programs that seek to improve the well-being of Americans at different stages of their lives.

Studies reported at the convening and elsewhere have measured cognitive, social, and behavioral development among arts participants and arts learners. The research applies to three pivotal sections of the lifespan:

Although these findings are promising, convening participants agreed that a collective leap forward is necessary to a) replicate, extend, and bring such studies to scale and b) share the results with researchers, practitioners, and the general public. In particular, the following challenges remain:

These needs have acquired greater currency in light of recent demographic trends and domestic policy priorities. With a rising cohort of highly active baby-boomers facing retirement, opportunities for creative engagement and lifelong learning in the arts are likely to prove critical for improved health and well-being. Educators and communities, confronted with large percentages of Americans failing to finish high school, are seeking innovative and effective strategies to engage students and boost their achievement levels. In this climate, a stronger role for arts education should be investigated.

Finally, the high-order critical thinking and creativity skills that have been linked to arts training are deemed increasingly vital to today’s workforce, the U.S. economy, and our nation’s overall competitiveness. At the convening, Mary Wright, a program director with the Conference Board, asserted: “Creativity and innovation are going to increase in importance.”

Wright based her conclusion on recent industry surveys of employers’ hiring needs. The results are clear: U.S. companies stand to gain from the knowledge and skills that an arts education can provide. High demand among employers for creativity, innovation, and critical thinking will translate into positive social and economic outcomes for workers who possess those skills, thus contributing more broadly to their human development.

The moment is ripe for federal leadership in the design, conduct, and dissemination of rigorous research and evidence-based practices documenting the arts’ contributions to human development—from early childhood, adolescence, and young adulthood to middle-aged and older adults.

To support this leadership role, the following actions are recommended:

1. Establish a federal interagency task force to promote the regular sharing of research and information about the arts and human development.

The task force would include high-level officials from the National Endowment for the Arts, the Department of Education, and HHS agencies such as the Administration for Children and Families, the Administration on Aging, and the National Institutes of Health. The group would convene two to three times a year to review progress on the following tasks:

2. Convene a series of technical workshops to help develop research proposals that represent robust and innovative study design methods to investigate the relationship between the arts and human development.

If the most competitive research proposals are to reach the appropriate funders, both public and private, then capacity-building through peer learning must occur. A series of workshops would help to improve the overall rigor of such studies, by recruiting outstanding scientists to tackle vexing and complex problems in pursuing this topic.

Because of formidable difficulties involved in mounting large-scale, longitudinal studies of the arts at work in human development—and because of the complexity of study design factors related to different age populations—it is important to bring together research methodologists and content experts in neuroscience, health, education, and the arts to advance discussion of key topics, including:

3. Bring the arts to national and international conversations about integrating the concept of well-being into policy development.

Even while new evidence is being gathered, the federal partnership should leverage growing national and international interest in using measures of subjective well-being as complementary and valuable tools to guide policy decisions. This discussion is highly consistent with the HHS strategic goal—“Advance the health, safety, and well-being of the American people.” At the same time, greater analysis of the arts in direct relationship to well-being will provide the NEA with an opportunity to realize one of its own strategic goals for the American people—“Promote public knowledge and understanding about the contributions of the arts.”

This recommendation also aligns with two National Institute on Aging-sponsored efforts to advance the measurement of subjective well-being for application to research on aging and health. Those efforts include:

Ultimately, it may surprise no one to discover that arts and arts education have strong positive effects on wellness and quality of life. Throughout human history, in virtually all cultures, the arts have been viewed as a hallmark of civilization—so why not of health and human development?

Yet one thing is certain: without vigorous and extensive research and evidence-sharing among government agencies, scientists, practitioners, and the general public, our nation will continue to lack effective, replicable models for using the arts to improve quality-of-life outcomes. The resulting deficiency represents a substantial loss for arts, health, and education providers serving Americans at all stages of life. The NEA-HHS partnership, through this white paper, endorses the timeliness and potential cost-effectiveness of the proposed collaborations and research endeavors.