2008 Survey of Public Participation in the Arts 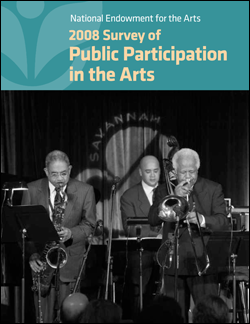 One in three adults attended an art museum or a live arts performance in the 12 months ending in May 2008.1

Figure 1-2 shows the number of U.S. adults (in millions) attending an arts activity at least once in the 12 months ending in May 2008. More than 50 million adults attended historic sites, art/craft fairs and festivals, and art museums or galleries in 2008.

Attendance at the most popular types of arts events — such as museums and craft fairs — also saw declines.

Trends in attendance by art form are summarized in Figure 1-3.

Economic conditions affecting arts participation. The declines in arts attendance occurred in a weakening economic climate and as travel costs were rising.

Changes in attendance patterns by age group. Longterm trends suggest fundamental shifts in the relationship between age and arts attendance.10

Sharp drops in attendance among the most educated adults. Arts activity still rises with education level,11
but even the most educated groups of Americans were participating less in 2008 than in 2002 and 1982.12

Other Modes of Arts Participation: Creating, Performing, Listening, and Learning

Creating and performing. Adults were generally creating or performing at lower rates in 2008 — despite opportunities for sharing their work online. Figure 1-6 shows these trends.

Internet use. Many Americans use the Internet to engage with artworks or performances, and those who participate via the Internet do so frequently.

Other media use. As in prior years, more Americans listened to or watched recordings or broadcasts of performing arts events than attended them live.

Adult arts lessons or classes. The 2008 SPPA asked adults about their exposure to arts and music lessons.

In an effort to improve the public’s understanding of issues critical to arts engagement, the NEA’s Office of Research and Analysis is currently exploring the relationship between arts participation and the following factors:

Reports on these and other topics will become available in 2010 via the NEA’s Research web page(www.nea.gov/research/index.html).

The complete 2008 SPPA dataset and questionaire can be downloaded from Princeton University’s Cultural Policy and the Arts National Data Archive website at www.cpanda.org.13
(The questionaire is also available on the NEA’s Research web page.) Alternatively, the dataset can be ordered from the U.S. Census Bureau, Customer Services Center.14
Further information on the details of the survey methodology is available in the 2008 SPPA User’s Guide.15
For a detailed description of Current Population Survey methodology, please see the U.S. Census Bureau technical brief at www.bls.census.gov/cps/tp/tp63.htm.