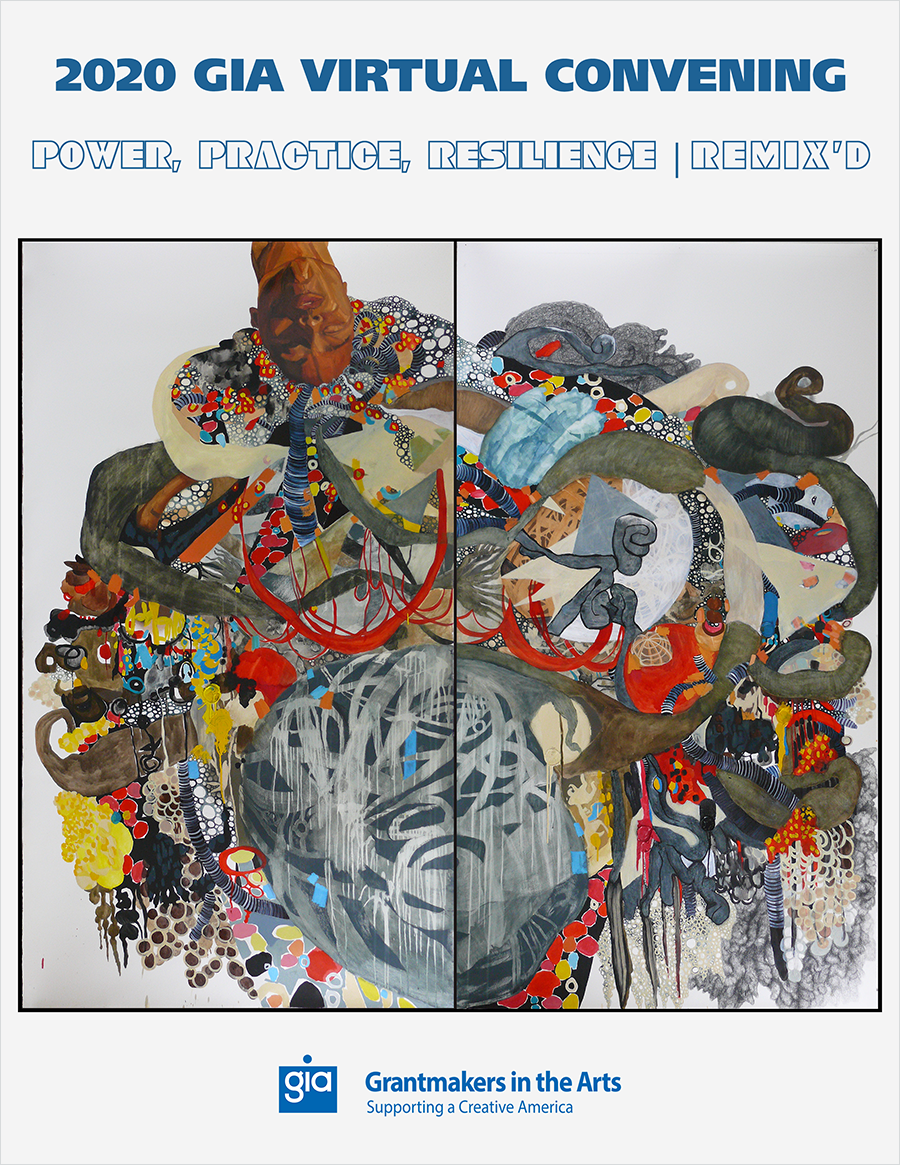 Today’s workshop, Reimagining Narratives of Power, brought to mind a long-ago debate I remember hearing between Kim Klein and Gary Delgado. (Kim is a grassroots fundraising guru and the author of Fundraising for Social Change, and Gary is a longtime racial justice organizer and the founder of what is now Race Forward.)

Gary began his argument with a quip about responding, when people asked him why he went after foundation grants to raise money for his organization, with something the bank robber Willie Sutton used to say when asked why he robbed banks: “Because that’s where the money is.” 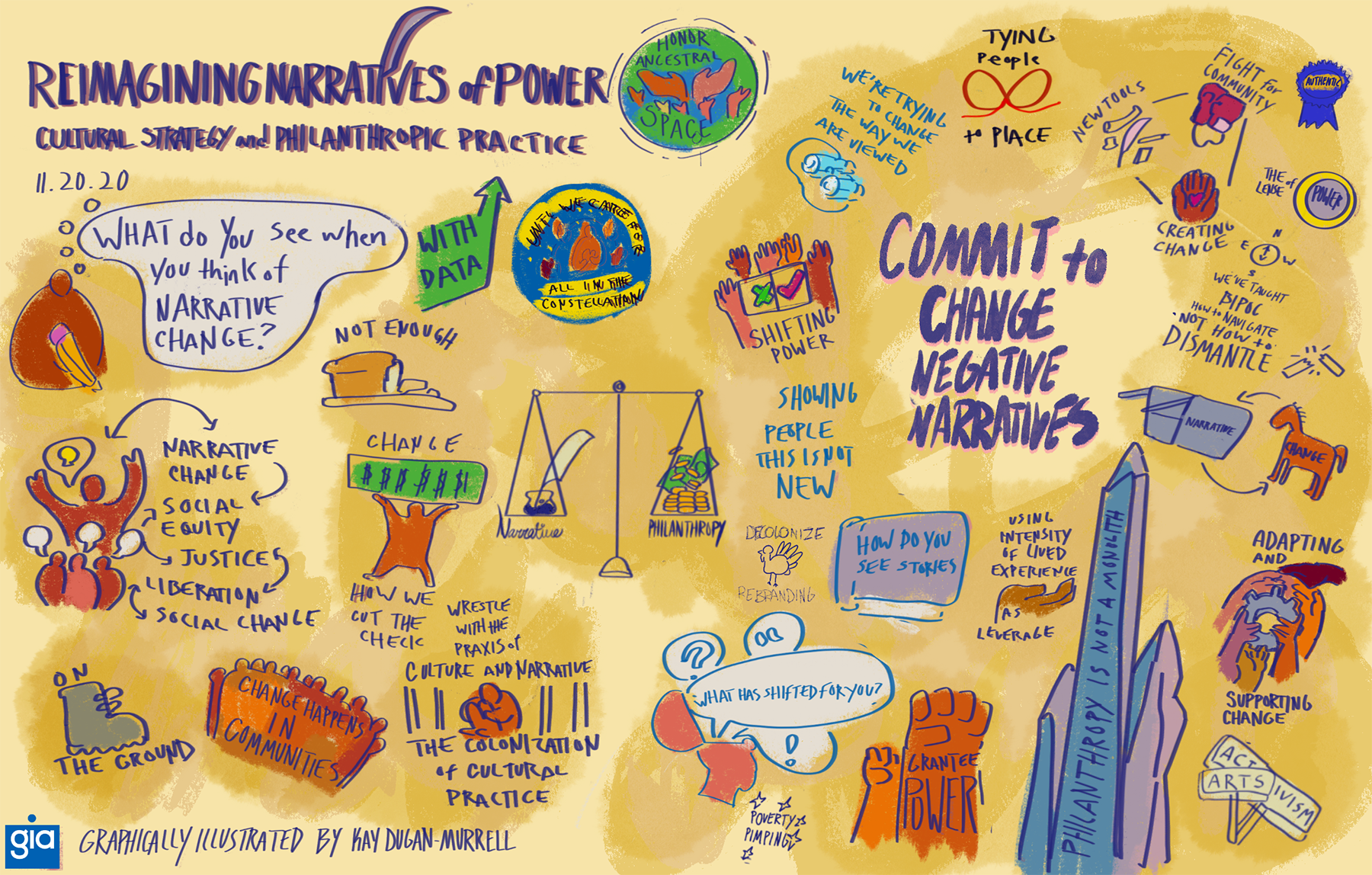 Conversation from the Reimagining Narratives of Power: Cultural strategy and philanthropic practice workshop, illustrated by Kay Dugan-Murrell of Drawnversation (IG: @drawnversation), captures the depth of our exploration into narrative change and cultural strategy toward a more just and liberated future for philanthropy, for funders, for artists, and for us all.

I forget Kim’s exact reply now, but I know her counter-argument was all about what she’s spent her career helping nonprofit changemakers put into practice—which is to transform our relationship to giving and asking for money, and to build a distributed base of donors to sustain the work, rather than focusing on winning “the foundation game.” This was nearly 20 years ago, and philanthropic practice along with the social justice nonprofit sector has changed quite a bit since then, but the faux-debate that Gary and Kim staged for a long-ago conference still holds some seeds of truth. Bear with me as I connect it to the rich and intricate, wide-ranging content of this Friday’s workshop!

This workshop really grappled with questions of what narrative shift means in theory and practice for arts funders as well as artists and cultural organizers, with special emphasis on the kinds of internal, institutional changes needed for foundations operating in this space.

I think, pray and hope we are living in a breakthrough moment where more and more people are awakening to the idea that we must move toward what GIA workshop organizers described as a “regenerative society rooted in a just distribution of political, cultural, and economic power.” Just Transition from climate catastrophe, racial reckoning and racial justice, saving democracy and saving our planet—as panelist Jasiri X put it, “This moment requires us to be more radical, not less. More revolutionary, not less.”

What’s needed is nothing less than a qualitative break from the dominant ideology. Both dismantling the systems of oppression, as Jasiri put it, but also building the regenerative alternatives from the ground up. Each of the panelists touched on this in their own ways. Lisa Ranghelli of NCRP pointed out the need to shift dominant narrative around philanthropic money as “private” rather than being a public resource to be given back to the commons. Michelle Ramos spoke of the work of Alternate ROOTS to build a shared leadership model, running an organization in a non-hierarchical, decolonized way that does not replicate the system. But at the same time, Michelle points out that Alternate ROOTS must also work not just to model its own liberatory project but to transform the status quo of the larger philanthropic industry.

This example gets at what has been tingling in my brain all day. Really, what we are doing here is engaging in dialectical thinking and practice, as taught by Grace Lee Boggs and continually renewed by the brilliant folks mentored by her (Adrienne Maree Brown, Scott Kurashige, Robin D.G. Kelley to name a few).

Dialectical thinking allows us to hold the contradictions and complexities of this moment, and to be in dynamic relationship with ourselves and each other. As for instance, when Gonzalo Casals, NYC Cultural Affairs Commissioner, spoke of examining whether his department, in order to meet the moment and the problems we need to solve, needs to change “the role of who we are, not just as a funder but also a convener, an advocate, bringing people together to have conversations,” and to examine how he too needs to shift at a personal level.

Grace Lee Boggs vehemently disagreed with the idea of protesting and making demands on the state, rather than putting into practice creating the solutions and the ways of being that we need to embody for a better world. She would have definitely sided with Kim in that debate over whether we should build our own beloved community to fundraise, or as Gary argued, go for reparations from the big foundations for what should be, after all, public money. But dialectical thinking returns us to the need for and the creative possibility for both/and. Because we must confront power to create change, but in order to do so we have to build our own power and for that we need our own places and platforms. We need the spaces of “semi-freedom” as Robin Kelley once called it, to sustain us on our road to freedom.