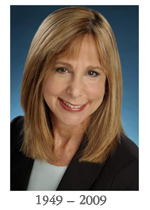 The Greater Philadelphia Cultural Alliance sorrowfully announces the passing of its president, Peggy Amsterdam. She died peacefully at home on December 26, surrounded by family and friends. Amsterdam established a new vision for the Cultural Alliance, focusing on arts and culture as a unifying force for the region. Among her many accomplishments were preventing the elimination of Philadelphia’s cultural funding in 2004. In 2008 Amsterdam worked with the Mayor's office to re-establish the City of Philadelphia's Office of Arts, Culture, and the Creative Economy. Most recently, she led a statewide coalition to defeat a proposed “arts tax” that would have expanded the state sales tax to include cultural organizations. She was also instrumental in establishing long-term stabilization funding for the arts in the state of Delaware during her role as the Director of Delaware’s Division of the Arts in 1993.