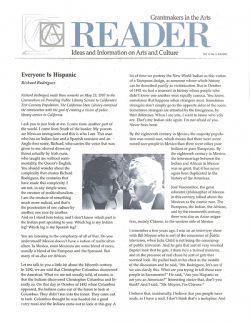 Why Do We Do What We Do?

“Why have we become so inadequate, as arts leaders, at really talking about the inherent value of the arts?” asked Claire Peeps (Durfee Foundation) in a 1999 article titled “Why Art?” in the GIA Newsletter (precursor to the Reader). Claire's question was stimulated by her experience with a sabbatical program through which the Durfee Foundation provided “time off” to leaders in the nonprofit sector in Los Angeles. She reported, “sadly,” that arts applicants had difficulty providing compelling answers to an application question, “why are you engaged in your current field of work?”– especially in comparison to their peers in the social services.

A similar concern emerged as a theme in many of the discussions among arts grantmakers around the country that were part of GIA's “field inquiry.” The concern was expressed in many ways: “The understanding of the arts needs to be broader. (Boston)” “We break all the rules of good advocacy, which are to build on personal relationships, understand the person we want to reach, and develop the case with specificity; it doesn't work to argue for a faceless general arts value for a faceless general public. (Los Angeles)” “There's a great need for stories of success. (Louisville)” “Our existing arguments are stale, there's a 'so what' factor about them; arts are more than just 'dinner and a show' but a tool that can save lives. (Washington, D.C.)” “To encourage the participation of donor advisors we need new language; the case can't just be how great the arts are, there must be a higher vision. (San Jose)”

Buried in the body of her 1999 article, Claire offered one response to her own question:

You can feed and clothe a person, but to what end? The arts are where we discover and express our humanity, privately or collectively. They provide us the tools to share our common joy and grief, to find communion with each other, to pass our stories and wisdom from one generation to the next. If everything is taken from us but life itself, what remains? Our voices, our bodies. With that alone, our humanity may be preserved.

While GIA's 2003 listening sessions prompted more pleas for new arguments than examples of new language, a few discussions headed in this direction. The following four-part exchange in New York is one.

Again, in that 1999 “Why Art?” article, Claire wrote that at some point, while she was contemplating the difficulty arts applicants had explaining their decision to commit their lives to art, a light went on: We are rarely asked the question, and we lack practice addressing it.

For the past year and a half, the Reader has run at least one article under the banner, “Why Art?” In this issue we decided to “practice” more actively, and to fill the first section of the Reader with pieces that address the question in one way or another. Although none were written expressly to meet this challenge, and their original purposes vary greatly, the sources of most pieces are GIA members, whether the role was as author or as “scout” (that is, directing the piece to us). In my own talking and writing, the inability to find the right words sometimes means I don't yet understand clearly enough what I'm trying to say. Reading and listening to the words of others and then trying out variations can be the best ways to gain clarity.