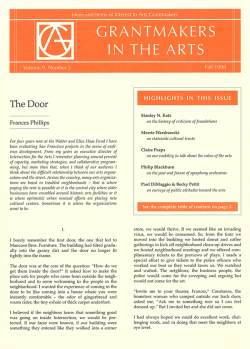 Why are you engaged in your current field of work? What significant lessons have you learned along the way? These are questions we ask of applicants to the Durfee Foundation's Sabbatical program, an initiative that provides "time off" to leaders in the nonprofit sector in Los Angeles. Sadly, arts applicants to the program have had difficulty providing compelling answers. By and large, their attempts to explain their commitment to their chosen field have been weak, particularly in comparison to their peers in the social services.

Currently in its second year, the Durfee Sabbatical program was designed to help rejuvenate L.A.'s most gifted nonprofit leaders, most of whom work under conditions of unrelenting stress. In an effort to prevent burn-out, the program provides up to $25,000 to outstanding individuals working in the social services or arts to travel, write, reflect, or otherwise renew themselves in whatever way they propose. Nonprofit infrastructure development is a secondary program goal. Recipient organizations are encouraged to use the absence of their leader as an opportunity to develop the next tier of leadership within their institutions.

We made a conscious decision at the outset to open the program to both the arts and social services. There are few points of intersection between the two sectors, and we hoped that the Sabbatical program could foster dialogue between them. The experience has been enlightening, though not in the ways we had anticipated.

During the program's first year, the arts felt like an awkward fit. The program is designed to serve individuals who work within traditional organizational structures, those who have their noses to the grindstone from nine-to-five (or usually much later), day in day out, week after week. The work patterns of arts applicants often didn't match this profile. Many arts professionals patch their livings together from multiple sources. Even though they may single-handedly run an organization — and many do — they may also teach, make art, serve as guest curators, and work odd jobs on the side. This lifestyle can be punishing — long hours, unpredictable income — but the irregularity of its rhythms may provide its own kind of relief. Some arts leaders receive grants or residencies that allow them to travel. They may also be able to build in down time at their own discretion, even if it means financial sacrifice. Many concede that the freedom of self-expression is its own reward. Working in the arts is elective, after all, and many are willing to pay a price for the lifestyle.

If you're trying to measure relative stress and the potential for burn-out, however, the arts administrator's cobbled schedule doesn't compare well to the nine-to-five grind, especially when the grind also entails enormous psychological pressure and financial uncertainty. The sheer human drama that penetrates a career in the social services puts arts professionals at a disadvantage in the Sabbatical program's competitive process. Caring for the needs of battered women, teen runaways, or immigrants who suffer from post-traumatic stress disorder is physically and emotionally debilitating. It wears you down. It may put you at physical risk. Ten to twenty years of it, without break, will almost certainly lead to burn-out, even for those who are unfailingly optimistic by nature and expert at pacing themselves. Against this backdrop of heroism and personal sacrifice, it's hard to make a case for the arts.

But we must. We must improve our case for the arts as an essential part of the continuum of human experience. A painting or a play may not be as immediately useful to a woman fleeing a violent home as is safe shelter for the night. But at a later date, the same art might be of immense value in assisting her to reassemble the pieces of her life. It may help another young woman avoid falling prey to the same circumstances. It could also affect how others come to understand the cycle of need and abuse, and the factors that give rise to such horror in our society.

Our review panel put the question to Tom Rhoads, director of the Santa Monica Museum of Art and a 1998 Durfee Sabbatical recipient: How do we justify supporting the arts in the face of these crushing social needs? His answer was simple and unassuming, but to the point. There are times of crisis in people's lives, he said, and time of relative well-being. The arts are probably more effective at serving those who have been safely removed from life-threatening crisis.

You can feed and clothe a person, but to what end? The arts are where we discover and express our humanity, privately or collectively. They provide us the tools to share our common joy and grief, to find communion with each other, to pass our stories and wisdom from one generation to the next. If everything is taken from us but life itself, what remains? Our voices, our bodies. With that alone, our humanity may be preserved.

Why have we become so inadequate, as arts leaders, at really talking about the inherent value of the arts? Why have the Durfee Sabbatical recipients had difficulty explaining their decision to commit their lives to art? As I contemplated the second round of applications this year, a light went off: We are rarely asked the question, and we lack practice addressing art. No wonder we fared so poorly on Capitol Hill and in other politically charged forums.

A colleague to whom I recently put this question speculated that we are raised to devalue a life in the arts. Oh, it's nice that you dance, but you don't really plan to major in it in college, do you? How do you plan to earn a living? She posited that we are given signals throughout our upbringing, both subtle and overt, not to pursue a career in the arts. At best, it may be indulged as a hobby or a passing fancy. At worst, it may be deemed an embarrassment or a failure — the aunt who dabbles, the son who can't get a real job.

Another colleague suggested that some of us are born to the arts, and can't help it — rather like being born gay or straight. Likewise, she suggested, our strengths may be musical or visual, so that we're not very good at talking about art. I'm not so sure I buy that. The Durfee Sabbatical applicants are institutional leaders. They are trained to talk about the arts. They write grants, curatorial statements, press releases, program notes. They deliver gallery lectures and speak before government commissions. They do so with ease.

In fact, they are very good at it. Ask them about the mission of their organizations, how many artists they serve, what sector of the field they support, who their audience is, how they conduct outreach, or how they measure the economic impact of their efforts. They will spout pages. But most of them still can't talk about why they are working in the arts in the first place.

Grantmakers are partly to blame for this dilemma. We frame the questions. During the past decade, we have become increasingly outcome-oriented. We look to the corporate sector as a model for strategic investment, and to the social sciences for the measuring tools to evaluate our results. On both fronts, we rely on numbers. Unfortunately, it's hard to quantify the art numerically, and any effort to do so will eclipse art's true value in fostering creativity and sustaining the human spirit.

I am a relative newcomer to the funding arena, so I offer these observations with all due respect. I understand that as grantmakers we are attempting to be responsible stewards of resources, and that we are using the best tools available to us. The net effect of our recent efforts, however, has been to squeeze the arts into ill-fitting equations.

The devolution of government funding has accelerated the process. As foundations struggle to pick up the slack in public support, the arts are pitted directly against social services in many boardrooms, and the arts are losing. Yes, the arts may be effective in improving math and science scores, preventing teen pregnancy, or reducing the spread of AIDS. They may contribute significantly to the economic revitalization of neighborhoods. Do they do so as well or better than other social programs? Maybe, maybe not. Are these the only measures by which they should be judged?

The institutional models we have evolved for training artists only complicate the matter. For the most part, we have encouraged artists to seek inspiration in isolation, rather than in common cause. We need to rethink the ways in which artists are trained to take part in a civil society, just as we need to rethink how audience engagement with the arts can stimulate civic participation.

Father Gregory Boyle of the Proyecto Pastoral in East Los Angeles spoke on a radio talk show last year about the pros and cons of gang intervention strategies. He suggested that if a parent were to ask, "Should I feed my child, clothe my child, or provide him shelter?" we would understand that the question itself is unacceptable. Food, clothing, and shelter are not either/ors. In the same way, the arts and social services are not either/ors. If we are to be a healthy society, we must honor and cultivate both. To do so effectively, we must learn to articulate the inherent values of each. We must do so compellingly and from an unabashedly personal perspective.

When asked what lessons she has learned from her years of professional practice, 1998 Durfee Sabbatical recipient Patty Giggans, director of the Los Angeles Commission on Assaults Against Women, had this to offer:

As arts grantmakers, we should ask questions that will elicit such introspection and clarity of purpose. If we ask directly, arts leaders will tell us why they are personally engaged in the arts. If we ask repeatedly, they will tell us why they believe the arts are of fundamental value to our culture. They will practice and perfect a case for the arts, and help get the public dialogue back on track.

Claire Peeps is executive director of the Durfee Foundation. Before becoming a grantmaker, Peeps was associate director of The Los Angeles Festival and served as consultant to several arts organizations nationwide including the J. Paul Getty Center, The Music Center of Los Angeles County, and the San Francisco Art Institute, among others.