Weaving Traditional Arts into the Fabric of Community Health

A Briefing from the Alliance for California Traditional Arts 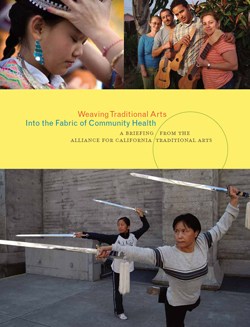 Weaving Traditional Arts into the Fabric of Community Health (1 Mb)

In the persistent call for measurable outcomes in the nonprofit sector, the arts continue to look for meaningful ways to assess their true value. The influential 2004 RAND Corporation publication, Gifts of the Muse, called for the field to consider the intrinsic value of the arts to individuals and groups of people instead of exclusively measuring instrumental benefits such as SAT scores or economic growth. As I write this, I’m in the middle of reading Counting New Beans, published by Theatre Bay Area and based on research led by Alan Brown and Rebecca Ratzkin, which seeks to move evidence of intrinsic benefits from the realm of anecdotes to that of data — quantifying such qualities as captivation, intellectual stimulation, and social bonding among theatergoers.

To shape his investigations, Brown constructed a model of personal and communal arts benefits — The Value System for Arts Experience — which includes “health and wellness,” “spiritual value,” and “family cohesion.” These very qualities are the focus of the Alliance for California Traditional Arts (ACTA’s) compelling research brief, Weaving Traditional Arts into the Fabric of Community Health, published in October 2011 (www.actaonline.org/content/briefing).

ACTA stepped outside the arts research field for this project, engaging researchers led by Sergio Aguilar-Gaxiola, MD, PhD, who heads the Center for Reducing Health Disparities at the University of California, Davis. The ACTA study examines qualities of personal and community health and well-being that derive from active participation in the folk and traditional arts.

In pursuing this thesis, ACTA was inspired by an earlier study coauthored by Dr. Aguilar-Gaxiola (then at California State University, Fresno) that looked at the mental health of Mexican immigrants in the United States. In the mental health study, a major finding was that for immigrants, staying connected to their culture and language served as a protective factor. Those who did not were twice as likely to suffer from clinical depression. This research had profound effects that reinforced the significance of culture in the larger context of community-based organizations’ service work. For example, California’s Radio Bilingüe adopted the motto “la cultura cura” as a lead to its cultural approach to community health.

The scope of ACTA’s Weaving Traditional Arts study is relatively small in that it looked at health effects and other outcomes experienced by participants in two of its signature programs; one pairs master artists with apprentices, and the other awards project grants to nonprofits to present performances, festivals, and workshops or to document traditional work. While the traditional arts definition holds many kinds of disciplines — performances, crafts, foodways, language retention, among others — researchers revealed a remarkable consistency across domains of artistic undertaking, culture, language, age, and generational groupings.

What was understood to be “health” in this study? Researchers defined it “as a state of complete physical, mental, and social well-being rather than merely the absence of disease or infirmity.” With that definition in hand, ACTA proposed the following hypothesis:

ACTA, by engaging people in the traditional art forms of their cultures, fosters in them a sense of community, cultural pride, and personal achievement that improves their sense of well-being and may ultimately benefit their health, as individuals and as members of a community.

To launch their investigation, researchers conducted a literature review of the arts-and-health arena. Weaving Traditional Arts opens with a helpful synopsis of that review, which encompassed studies of art’s contribution to health in both medical and community settings. Commonly identified benefits were improvement of physical environments, providing avenues through which emotions are expressed, lifting spirits, and stimulating thinking. Only in the past decade has research looked at these benefits as yielded through active participation in the arts (in contrast to benefits gained through observation or listening), which is essential to ACTA’s work and to its hypothesis about health and arts participation.

With the literature review as context, the report summarizes recurring themes of growth, health, and holistic well-being that emerged in interviews and focus groups with ACTA grantees:

Participants reported personally meaningful individual-level benefits, including increased self-esteem, connection to tradition and community, and interconnected mind-body awareness and wellness, along with the healing qualities of the traditional art. At the family level, the joy and benefit of intergenerational activities, a sense of respect for elders and traditions, the transmission of cultural heritage and practices, and the mitigation of historical trauma were among the observations shared. Turning outward, at the neighborhood level, participants touted the benefits of a gathering space in which all generations could commune and communicate, leading naturally to the wider community-level impacts: perceiving the artist as a community leader and organizer, the activity as a means to bridge gaps across communities, and between generations in a single cultural or ethnic group.

Would findings in a study of passive participation in the arts yield similar results? Do traditional arts practices offer their participants health benefits that are stronger or different from other kinds of arts participation? The distinct challenges to actively studying and practicing an art form would seem necessary to achieve the skill learning, sense of mastery and self-improvement, and physical strengthening ACTA’s research revealed; and the heightened sense of community history, recognition of elders, strengthened connections across generations, and spiritual and moral growth may be particularly profound among practitioners of traditional arts.

Weaving the Traditional Arts is compelling for its fresh contribution to the understanding of intrinsic arts benefits, and the report calls for others to pick up this line of investigation. Consistency of the research findings suggests that ACTA’s hypothesis has surfaced a rich vein to be mined further.

Frances Phillips is program director, Arts and the CreativeWork Fund at the Walter and Elise Haas Fund, and coeditor of the GIA Reader.