Shannon Stewart: In Every Town 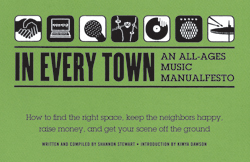 The back cover of In Every Town: An All-ages Music Manualfesto announces, “IT'S IN YOUR HANDS.” The book is a call to action to put on and support all-ages music shows and to give musicians the tools to develop and release their own music.

In Every Town and the related website (allages.net) are tools for like-minded, do-it-yourself music programs to create a network and share knowledge with one another. The very writing of the book built relationships among a cluster of such organizations in that leaders of the groups highlighted in the book visited and wrote profiles of each other. In the culminating chapter, participating organizations came together in a forum where they posited the notion of being a “field,” quickly acknowledging that deciding together how things ought to be done is antithetical to the notion of DIY. According to Stewart, “A lot of folks want to avoid creating another homogenizing chain enterprise and would argue that it's fundamental for people to figure it out on their own.”

If the book has a central narrative, it's the story of the Vera Project in Seattle, founded in 2001 and inspired by the Vera club in Groningen, the Netherlands. The Vera club is more than a hundred years old, funded by the Dutch government, and a center of the international pop underground. Seattle's Vera Project was created after two of its cofounders stumbled across the Vera club and in response to a legal battle back home. In 1985, Seattle adopted the Teen Dance Ordinance (TDO), which “made it virtually impossible (and illegal) for anyone between the ages of 15 and 20 to gather to listen to music or dance.” To produce an all-ages concert, one had to hire three off-duty police officers and purchase a $1 million liability insurance policy. At a time when Seattle's music scene was in the national spotlight, “underage” audiences were essentially shut out of clubs and concerts. Eventually the TDO was repealed, but the desire to create more music spaces that are open to young people drove the Vera Project and shapes the rallying cry behind In Every Town.

Over the years, the Vera Project's founders gained credibility with city government that turned to seed funding and, eventually, to a $1 million state-of-the-art venue. Today, with its building, its nonprofit status, and its government funding, the Vera Project, along with AS220, which has three buildings in downtown Providence, Rhode Island, rests at one end of the spectrum of the profiled agencies. Some others are illegal and ephemeral, some are branches of other nonprofits, some are collectives, and some are for-profit businesses. All have music in common. Some also offer tutoring, visual arts, recording studios, and theater programs.

Each of these organizations has a distinct creation story—often a story based in fear—whether it is Batey Urbano, which grew out of a need to address gang violence and the drug trade in a Puerto Rican neighborhood in Chicago, or the Elementz in Cincinnati, Ohio, which grew out of work of a citizens' group that was monitoring interactions between police and citizens following race riots in 2001; or The Spot in Denver, founded after the summer of 1993 was named the Summer of Fear owing to seventy-four homicides—thirty-six of them teenagers. If there's instruction to be gleaned from these many examples of how to begin, it's the importance of responding to community needs and listening to the ideas of young people.

As a book that is grounded in the idea of youth inclusion, In Every Town vividly illustrates how youth development organizations in which adults provide the ideas about how to be youth-centered are distinctly different from youth-led organizations. Both matter, but while the latter may be more ephemeral, they may have greater value to youth.

Grantmakers wrestle with what to do about the informal arts sector, with how to support its vitality without destroying its character. We also talk about whether variations on the standard 501(c)(3) nonprofit organization structure could better serve the arts. In Every Town grapples with these questions from the inside out, with user-friendly analyses of the pros and cons of forming a nonprofit, of operating as a collective or with defined leadership, of leaning on a host organization or remaining independent, of accepting government and foundation money or operating on door receipts and volunteer sweat. Operating beneath the radar may require organizers to move constantly and live in fear of being shut down. Then, again, Cave 9 in Birmingham, Alabama, decided to “go legit” and went through a grueling process to become a nonprofit. “Legit” is not always a path to stability, however: upon incorporating, Cave 9 was promptly charged six thousand dollars by the state of Alabama for back taxes covering its years of operation before incorporating. In 2009, it was shut down by the fire marshal.

While grantmakers may skip the how-to chapters on booking a concert or writing a grant proposal, In Every Town contains good management advice and—true to its ethos—offers that advice as choices, not as lessons. Ultimately, what matters is clarity about one's values. In this book, they are “Be open-minded. Don't be judgmental. Let everyone in.”