Philanthropy and the Regeneration of Community Democracy 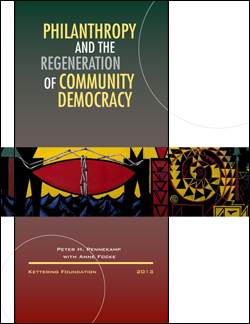 Philanthropy and the Regeneration of Community Democracy is a retelling and analysis of the experience of Humboldt Area Foundation (HAF) between 1994 and 2012 in Humboldt County, California, during and after what the report refers to as the “Timber Wars.” By extension, it also suggests that foundations willing to take the risk of becoming “staging grounds” for community democracy can see the kind of systems change that is “often a target of large philanthropies.” The authors caution that “changing a culture takes time and the timing tends to be unpredictable,” while large foundations tend to reward timeliness and predictability.

By creating a community commons where people felt safe, HAF took itself out of the foundation’s “expert” role and lived out the notion that good ideas come from everyone. By addressing the discomfort the James Irvine Foundation felt about the lack of returns in the first year of a multiyear $1.25 million grant, the Humboldt Area Foundation was able to make a contribution to economic recovery in a deeply conflicted process of job loss and environmental concern.

Despite turning down a Ford Foundation grant for “training and peer learning from the Aspen Institute’s Community Strategies Group” (19) in 1988 — HAF felt the required fund-raising would divert energy and “scarce staff time from community engagement and action” (ibid.) — they were later invited to participate in the Aspen program, and “Ford became a significant contributor to cultural organizing” (ibid.) in the region’s American Indian communities.

Five operating principles are illustrated through various aspects of several stories. The authors describe these principles as “the stars by which Humboldt Area Foundation has charted the course of its development as a community philanthropy” (15).

The authors define community democracy as “grassroots engagement where people uncover, activate, and energize their community’s own assets, take responsibility for their formal and informal decision-making processes, and further their ability to work constructively with conflict and difference” (15).

For philanthropists interested in fostering structural change and building community democracy, the following seven principles may be helpful:

The writers suggest that philanthropy may have a huge role to play in building community democracy and that it must be willing to provide commons, structure, some guidance and money, and patience as the process develops in ways that may be neither hierarchical nor comfortable for foundations. In order to benefit from the flexibility, understanding, creativity, and collaboration of engaged individuals, foundations may need to let go of the outcome — at least for a while.

Molly Giles Walker is a member of the Archie B. and Bertha H. Walker Foundation; she is working on a thesis for the University of the Arts graduate museum studies program.