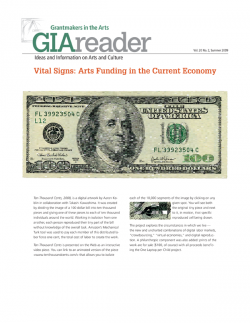 The Outlook for Foundation Giving

Since 2001, GIA and the Foundation Center have collaborated on an annual “snapshot” of foundation funding for the arts based on grants awarded by a sample of over 1,000 of the largest U.S. foundations. Given the exceptional challenges now facing the country’s foundation and nonprofit communities, we have concluded that the arts field would be better served this year by a broad overview of how foundation giving might fare during the current economic crisis.

According to the Foundation Center, estimated foundation giving in 2009 will decline in the range of the high single digits to low double digits. At the same time, this anticipated decline will be far less than the estimated 21.9 percent drop in foundation assets in 2008. Asset averaging, increased payout rates, and exceptional commitments made in response to the economic crisis are among the factors that will moderate reductions.

During the past two recessions, no single subject area seems to have borne the brunt of the crisis. The 1990-91 and 2001 recessions suggest that economic downturns primarily affect the overall level of foundation giving rather than funders’ broad grantmaking priorities.

The implosion of the housing market, onset of recession, freefalling stock market, credit contraction, and the worst job reductions since the end of World War II have contributed to enormous losses in private wealth and charitable endowments. The major stock market indices posted year-end 2008 decreases ranging from 34 to 47 percent. By comparison, the Foundation Center estimates that foundation assets declined far less — 21.9 percent. (Adjusted for inflation, assets fell 24.7 percent.) Nonetheless, while foundations still held more than $530 billion at the end of 2008, this represents nearly $150 billion in charitable resources that have been lost in a single year.

The outlook for 2009 does not appear much brighter, with most economists anticipating a modest pick-up in the latter half of the year but no meaningful recovery until sometime in 2010. Yet findings from the Foundation Center’s January 2009 “Foundation Giving Forecast Survey” suggest that 2009 foundation giving will decrease in the range of the high single digits to low double digits — far less than foundations’ asset losses in the prior year would suggest. 3 (Continued economic volatility, of course, makes this prediction less certain than in more stable economic periods.) (Figure A and Figure B)

Most respondents (67.1 percent) expect to reduce their giving at least to some extent, with mid-size foundations — those giving between $1 million and $10 million — being the most likely to expect to decrease their giving (71 percent). The fact that some foundations still expect to increase giving in this economic climate strikes an optimistic note for the future, though this finding must be tempered by the reality of 2008 giving, when a far larger share of respondents reduced their support by year’s end than expected to do so before the economic crisis deepened. (Figure C)

Helping to lessen the potential impact on giving of this record decline in assets is the practice among some foundations of determining their grants budgets based on a rolling average of their asset values over two or more prior years. In both 2006 and 2007, foundations posted double-digit year-end growth in assets. For foundations that calculate their grants budgets this way, these two especially good years would have helped to minimize the impact of the 2008 decline on 2009 giving.

Several foundations have also announced plans to increase their payout rate, which represents the share of their assets that they distribute each year for charitable purposes, and/or to reduce operating costs to shore up their grants budgets. In addition, a number of grantmakers have made exceptional commitments to directly address the current crisis, such as assisting homeowners in foreclosure, providing credit counseling, and supporting food banks. 4

The outlook beyond 2009 remains unclear, and much depends on when and how strongly the economy and stock market begin to recover. More than half of respondents to the latest survey expect to maintain (39.4 percent) or increase (14.1 percent) their giving in 2010, although larger foundations — those giving $10 million or more each year — were roughly half as likely as smaller foundations to expect to raise their giving. About one in five foundations (20 percent) expect to decrease their giving in 2010. The remaining roughly one-quarter of funders (26.5 percent) are uncertain at this point.

Even if a solid economic recovery begins in 2010, foundations that establish their grants budgets based on a rolling average of asset values — including a number of the largest U.S. foundations — will be forced to factor in dismal 2008 investment performance. Of course, given the continued deterioration of the market in early 2009, foundation assets could potentially be down more by year’s end. In either case, it appears reasonable to expect that foundation giving will decline further in 2010. Despite this less positive outlook for the near term, however, foundation giving will undoubtedly begin growing again as the expected economic recovery gains strength.

Outlook for giving by foundations with arts subject areas

There is relatively little difference between the expected 2009 giving levels of foundations with an arts field of interest and those without a demonstrated interest in the arts. 5 Based on findings from the latest “Foundation Giving Forecast Survey,” both sets of funders are expected to reduce their giving in the high single-digit to low double-digit range. Likewise, there appears to be little difference between arts funders and others concerning expected giving levels in 2010. About 21 percent of foundation respondents with arts subject areas anticipate lowering their giving next year — compared to 20 percent of foundations overall — while more than one-quarter of both groups are unsure how their giving will fare.

Despite these similarities, funding for the arts will undoubtedly be reduced over the next couple of years, along with giving for most other fields. According to the recent Foundation Center survey, close to two-thirds of foundations anticipate reducing the number and/or size of their grants in 2009. 6

At the same time, the vast majority of foundation respondents expect to maintain their current number of programs areas. (See page 17 “Giving Patterns after Economic Downturns”) Funders may also be more inclined to identify other strategies for achieving their goals. In fact, over half of all respondents to the Center’s recent survey (54 percent) indicated that, in response to the economic downturn, they expect to be engaging more in a range of non-grantmaking activities. Of these respondents, fully two-thirds indicated that they are seeking to engage in more collaborations and partnerships, while about one-third (36 percent) expect to initiate more convenings.

Outlook by type of foundation

This finding seems particularly surprising given that corporate foundations have arguably been even more directly affected by the rapid deterioration of the economic situation than other types of foundations. This conclusion in part reflects the historical importance of foundations established by companies in the banking and finance sector. In the late 2000s, just over one-quarter of corporate foundation giving was provided by foundations tied to companies working in the industry at the center of the current crisis. The impact of this economic calamity has also moved well beyond the financial sector, with a sustained drop in personal and corporate spending prolonging the recession and affecting corporate earnings across the board. It is unknown, however, to what extent corporate foundations that are holding the line on their giving will be able to balance out other foundations that either need to cut their giving or have ceased to exist. (Figure E)

One factor that may work in favor of community foundations in the current economically challenging environment is that their donor-advised funds can be seen as a less costly alternative to maintaining a separate, endowed institution. This could make community foundations attractive to those donors who are still interested in establishing a formal vehicle for their philanthropy or those considering closing down their existing foundations due to a significant loss in charitable resources.

Community foundations have also tended to benefit in both more and less prosperous times from having a broad pool of individual donors. The decreased contributions of some donors tend to be balanced out by increased giving from others. However, given the broad impact of the current financial crisis, the benefits of this pooling of support on overall community foundation giving may be limited in the near term. (Figure F)

All Foundation Giving. A Foundation Center analysis of foundation giving during prior recessionary periods, indicates that after the 2001 recession, foundation giving, in inflation-adjusted dollars, declined just 4.4 percent, compared to the inflation-adjusted 16 percent drop in foundation assets recorded between 2000 and 2002. Among the factors that contributed to this pattern: donors continued to establish new foundations, donors continued to give to existing foundations, and a number of foundations determined their grants budgets based on a two-to-five-year rolling average. 8

Foundation Arts Giving. An analysis of foundation giving during the last two recessions (1990-91 and 2001) suggests that no single subject area is more or less likely to bear the brunt of an economic crisis than any other. While some fluctuations in the relative shares of giving in specific subject areas did occur during the past two economic downturns, the fluctuations were not larger than those seen during the years both immediately preceding and following these periods. This suggests that past economic downturns primarily affected the overall level of foundation giving, rather than funders’ broad grantmaking priorities. 9 These findings should not be taken to mean that the specific grantmaking initiatives do not change over time. Rather, they suggest that foundations have a steady commitment to mission and to grantmaking priorities and guidelines. In fact, a recent Foundation Center survey found that the vast majority of respondents expect to maintain (80 percent) or increase (3 percent) the number of areas they support in 2009. 10

Steven Lawrence is senior director of research, the Foundation Center.
For more resources on giving in the current economic climate, see foundationcenter.org/focus/economy.