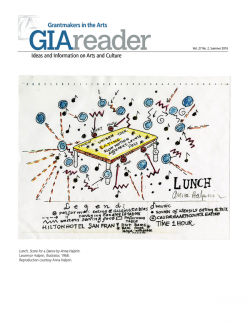 New York City Department of Cultural Affairs (DCLA) is committed to working with cultural organizations toward engaging more New Yorkers at many different points in their lives. In January 2015, Tom Finkelpearl, commissioner of New York City’s Cultural Affairs, convened representatives from hundreds of cultural organizations along with funders, government officials, and other local leaders at the headquarters of the Ford Foundation. Inspired by New York City mayor Bill de Blasio’s vision for a more inclusive and equitable city, the purpose of the event was to draw new focus to a question at the very core of our cultural communities: how can we work together to create a sector that reflects the full breadth of the residents it serves?

We are in the midst of a national discussion on diversity, from college campuses, to professional sports, to the motion picture industry, and beyond. In the DCLA’s role as a public agency and supporter of art and culture in America’s most diverse city, we are committed to opening doors for New Yorkers of all backgrounds as staff and leaders of our cultural organizations. Not only is this critical for the health of the cultural sector, positioning groups to continue attracting audiences, supporters, and talent for the next generations; it is also the right thing to do — opening up the transformative benefits of cultural engagement for residents of every background.

One of the first major steps of the initiative was a survey of the cultural organizations that receive funding from the City of New York, with the goal of setting a baseline understanding of where our cultural community stands with regards to the diversity of its workforce. The results were released in January 2016: 987 organizations provided information on 36,441 paid employees, providing an in-depth look at who works in our cultural community.

The challenges laid out in the data are real, but there is good news. New York City’s museum workforce is considerably more diverse than the national averages. A decade-by-decade comparison shows that newly hired employees are more diverse than those hired in decades past. Multidisciplinary organizations have more diverse staffing patterns than other disciplines. These insights allow us to examine more closely and build on the practices of multidisciplinary organizations and others. They also allow us to ensure that any efforts we support to increase the engagement of diverse residents in the cultural workforce include investments in those organizations who already have diverse staffs. Likewise, we have the opportunity to invest in professional development for staff members from diverse backgrounds, who are better represented at the junior and middle levels of our cultural organizations, building a bridge for the next generation of our community’s leaders.

The survey responses did not provide substantive information on several populations, including people with disabilities and people who self-identify as being of nonbinary gender. We are aware of this lack of reporting and are committed to ensuring that these groups continue to be fully involved in the discussion and engaged in efforts to promote a more inclusive community. To that end, we are in active dialogue with the New York City Commission on Human Rights, the Mayor’s Office for People with Disabilities, and the Alliance for Inclusion in the Arts, and others. The DCLA is committed to engaging in long-term learning as part of New York City’s cultural community, embracing diversity as a core value of the agency and all of its work.

So while it is clear that we have work to do, in scores of interactions we have had with staff at organizations large and small from across the city, the overwhelming majority recognize the opportunity at hand and are committed to working together to make real, measurable progress. Now we have a foundation for our conversation and action. The enthusiasm and urgency generated have provided opportunities like the following to take serious action toward addressing the issues highlighted in this report.

Diversity may be a national issue, but it requires local solutions. The level of enthusiasm and commitment we have seen in New York City is inspiring, and it is channeling that energy toward pragmatic efforts that will show us how we can cultivate a cultural sector that embraces the full breadth of experiences, backgrounds, and talents that make our city great.

Edwin Torres is the deputy commissioner at New York City Department of Cultural Affairs and a member of the Grantmakers in the Arts’ board of directors.