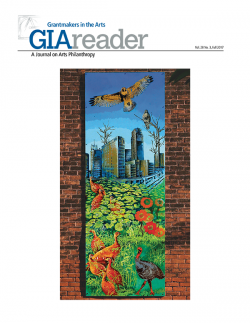 “Is the stadium we passed going up or coming down?” asked Kristen Calhoun, ArtChangeUS founding program director. Suddenly the previously strained community meeting we were attending came alive. Kristen and I were in Detroit in July 2016 to plan ArtChangeUS REMAP: Detroit, and we had repeatedly driven by the mass of steel girders, not knowing if it represented Detroit’s past or future. Artist and activist Invincible ill Weaver had organized a series of gatherings for us to meet with grassroots cultural change makers. Garth Ross, vice president for community engagement for the Kennedy Center for the Performing Arts, was shadowing our process as part of our prospective partnership exploration. Prior to this question, the sessions had been somewhat stilted and for good reason. Detroit, like New Orleans, has attracted disaster tourism and those who see opportunity and a frontier, instead of people. Although I had worked for many years in Detroit while at the Ford Foundation, I was no longer a funder, so no one had to shine or make a case. The room simply erupted — and the entire planning trip shifted. And along with it, our practices.

We heard about the controversy catalyzed by the building of the hockey stadium by Olympia Development in a city deal that had no community benefits in place, yet had major funding from taxpayers. At all of our meetings we met artists and community members who spoke passionately about a deep community effort, spearheaded by Rise Together Detroit, which had collected over 5,400 signatures and through trainings and small groups created a legally binding Community Benefits Ordinance (CBO) ballot proposal that would ensure benefits, including environmental protections, small business and employment opportunities, affordable housing, and other measures. While the ordinance was defeated in the November 2016 general election, the three-year process of democratic participation and the resulting language are evidence of the strength and sophisticated thinking of Detroiters. The proposal serves as a template for transferable strategies for equitable organizing for the arts and other sectors.

The CBO work in Detroit compels us to ask ourselves: Is it possible to move beyond community outreach and engagement to community benefit and agency? What would that look like for projects and events we curate and organize? And how would that change our organizations and institutions? How do we value and uplift local knowledge, expertise, and cultural capital? How do we hold ourselves accountable when doing work both where we live and in other places? And what are the counter benefits of employing a process that nurtures genuine relationships and equitable input from community?

This was the rich context that preceded the New Museum’s organizing of IdeasCity in Detroit in April 2016.1 Detroiters met with the conference organizers and produced a set of organizing recommendations adapted from the CBO. When we learned about this, we asked, how can we build on this effort? Could we partner to develop a set of strategies that are both values driven and pragmatic to share with our Core Partners and the larger arts field? The resulting Cultural Community Benefits Principles (CCBP), developed in consultation with artists Halima Cassells and ill Weaver, are currently being adapted to a tool kit by Cézanne Charles, director of Creative Industries at Creative Many. The tool kit will be launched in fall 2017 and is intended to help artists and organizations along a spectrum of diversity to incorporate new strategies and approaches.

So how did our practice shift? We were propelled to recognize that Detroit sits on Anishinaabe land and is the US city with the largest percentage of African Americans. This informed our organizing and programming, helping us to build new relationships, curate Detroit voices at every session, and lean toward a representation of approximately 60 percent Detroit and 40 percent other national voices. In practical terms, we needed to research how our dollars might stay within the community, not only through fees to artists and presenters but through hotels, printing, catering, shuttle services, media, and so on. The NABHOOD (National Association of Black Hotel Owners, Operators, and Developers) website led us to book the Roberts Riverwalk. Devon Akmon, executive director of the Arab American National Museum, recommended an Arab American–owned shuttle service. We achieved our target to spend 60 percent of our budget in Detroit with locally sourced businesses owned by people of color, women, and LGBTQ+ persons. Aside from knowing our resources were investing in Detroit, we forged relationships that grow as we continue to utilize Detroit businesses as an alternative to big-box stores.

Leaving Detroit, we asked our network of Core Partners to adopt the Cultural Community Benefits Principles, to evolve them by contributing their own recommendations of best practice, and to identify barriers and strategies to equitable and accountable organizing. How do those of us operating out of large institutions, such as schools, museums, and larger-budget arts organizations, facilitate new pathways into the approved vendor and subcontracting processes? Practical strategies are as important as critical values propositions. Leading field practice includes the Detroit-based Allied Media Conference, which has a great zine on how they organize their conference that clearly outlines how to operationalize a set of principles that are based in place, are power shifting, and focus on problem solving. The Detroit Digital Justice Coalition, an Allied Media–sponsored project, also outlines a set of principles that address media-based organizing to provide access and common ownership and to grow the health of communities.

We left Detroit not only researching businesses wherever we work but also asking, Whose land are we on? wherever we are. Returning to the California Institute of the Arts, where ArtChangeUS is based, I must have asked fifty people who had no idea. Try asking this question, and follow where the answer may lead. Eyvind Kang, a new music composer and CalArts faculty, gave the answer: the institute sits on Tataviam land. He had collaborated with Tataviam bird singers on a composition that had been performed on campus. It was unexpected that a new music composer would lead us to the answer; he also pointed to a number of noted CalArts Native alumni: Richard Ray Whitman, Raven Chacon, Suzanne Kite, Eve-Lauryn LaFountain, and Chad Stephen Hamill. Answering the question widened our knowledge of artists; building an institutional relationship is a next step.

We have walked that journey with the Kennedy Center for the Performing Arts over a two-year exploration to create a model of cultural equity with our nation’s cultural center. Robert van Leer, the senior vice president of artistic planning, originally approached us about possible collaboration and after a year of intensive planning meetings, became an ArtChangeUS Core Partner,2 joining a network of cultural change makers enacting a transformed arts ecology. We advance an innovative model of network organizing, asking, What can we do together to accelerate cultural equity and social justice that we can’t achieve individually? The Kennedy Center, like the majority of institutions in America, is at a pivotal change moment under the new leadership of its president, Deborah F. Rutter. Its artistic program and relationship to audiences are expanding through the appointment of people to unprecedented positions, including Q-Tip and Simone Eccleston, artistic director and director of hip-hop culture, respectively; innovative community-engaged programs and partnerships; the curatorial excellence of Alicia Adams’s international programming; and a commitment to public access through free Millennium Stage programs, themed public days, and extensive digital reach.

But when we asked the question, Whose land are we on? there was no answer. We had been invited to curate a dialogue series, which we branded ArtChangeUS@Kennedy Center National Conversations. Launching with the rapper/actor Common and writer Chinaka Hodge, the thought-provoking conversations between notable culture makers tackled social and cultural issues redefining a demographically changing country. We eventually found the answer through artists we programmed. On April 24, 2017, a historic event occurred when Natalie Proctor, tribal chairwoman of the Cedarville Band of the Piscataway Nation, and two of its members gave greetings and offered song, prior to the “Water Is Life: Living Our Legacy” conversation between Liz Medicine Crow and Ty DeFoe. It was the first time in the Kennedy Center’s four-decade history that the tribe received this recognition. Significantly, Garth Ross followed by inviting them back as performers at the Open House program and now acknowledges the Piscataway in his program introductions. And in September 2017, the Kennedy Center will be the site of a groundbreaking conference, “FIRST AMERICANS and NEW AMERICANS: Dignity in Land, Citizenship and Sovereignty,” coorganized by the National Congress of American Indians and Define American. The watershed gathering will convene tribal and immigration rights leaders for uplifting and advancing shared priorities. Related Millennium Stage and National Conversation programming will further integrate the conference into the programmatic life of the center.

This may seem like a symbolic gesture, but leading organizations understand the value of contextualization and critical relationship building and are furthering these practices.3 Artists, particularly of color, have often been expected to create a bridge to communities. The onus is often on them to substitute for, not extend, the more profound inclusive hiring practices, decision-making shifts, and relationship building that are needed to transform forward-looking institutions.4 The imperative to transform is not just an arts sector challenge. Following the 2016 #Oscarssowhite protests, the New York Times reviewed 503 of the most powerful people in American culture, government, education, and business. They “found that just 44 were minorities. Any list of the powerful is subjective, but the people here have an outsize influence on the nation’s rules and culture.”5

Yet demographic change is rapidly reshaping culture and redefining American identities between and beyond the two coasts. Houston, Texas, surpassed New York in 2010 as the most racially and ethnically diverse metropolis in the country.6 The most diverse neighborhood census tract in America is Mountain View, Alaska.7 The great Detroit activist Grace Lee Boggs said that change “takes place in living systems, not from above but from within, from many local actions occurring simultaneously.” Today, America is being remapped by its people — and Detroiters are offering invaluable vision.

Roberta Uno is the director of Arts in a Changing America, a national project on changing demographics and the arts based at the California Institute of the Arts. She was the program officer and then senior program officer for Arts and Culture at the Ford Foundation from 2002 to 2015. From 1979 to 2002, she was the founder and artistic director of the New WORLD Theater at the University of Massachusetts Amherst and a professor of directing and dramaturgy in the university’s Department of Theater. Her newest book, Contemporary Plays by Women of Color, will be published this fall.