A Back-to-Basics Pathway to a Revitalized American Democracy 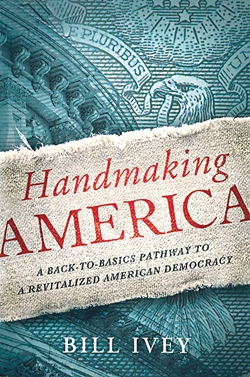 In his new book we learn about many of the things Bill Ivey doesn’t like:

And we learn about some of the things Bill Ivey does like:

Ivey’s short (but dense) book is more than just a personal inventory of turn-ons and turnoffs; it’s a heavily footnoted manifesto for revitalizing America by embracing the thinking of the nineteenth-century Arts and Crafts movement, and his motivation for writing it is noble and actually quite brave.

“Progressives have given up the fight,” writes the former chairman of the National Endowment for the Arts. “The American dream [has come] to mean nothing more than big houses, nice clothes, and gigantic Wall Street bonuses.”

And so, despondent that liberals, Democrats, his think tank colleagues at the Center for American Progress, and even President Barack Obama (whose campaign and transition team he was a part of) have not articulated a plan for putting America back on the right path, Ivey has set forth to “offer a new vision, and new strategies, for a high quality of life in a reshaped economy.”

And what is this new vision?

Because he believes that America used to be great, much of his prescription is about restoring the ethics, systems, and definitions of happiness that ruthless capitalists and Republicans have destroyed over the past thirty years.

Banks, corporations, and media conglomerates in particular should be massively reregulated. Ivey spends considerable time tracing the dysfunction of government and disintegration of substantive public engagement with politics (and our moronic obsession with celebrity) to Ronald Reagan’s gutting of the FCC and dismantling of the ABC-NBC-CBS-PBS airwave monopoly.

Government should resume responsibility for delivering the public services it used to provide. No more mercenaries fighting our wars, or private companies running our prisons and schools, picking up our trash, and competing with the post office.

Schools should scale back standardized testing and once again place the teaching of civics, humanities, and the arts on an equal footing with math and science because, he argues convincingly, a high-functioning society requires that education be more than just job training. (Plumbing and carpentry and other vocational skills that can’t be sent offshore are different, says Ivey. Those should be taught — and while we’re at it, home economics should be brought back too, though he makes no mention of a twenty-first-century trade like writing code.)

Because the Internet, and with it the ubiquity of ever-more invasive advertising, is new, Ivey calls for strong pro-privacy legislation and repeatedly admonishes readers not to be naive about the personal data they’re giving up when they use services like Facebook and Gmail for free.

But the most novel suggestion of Ivey’s is a four-day workweek.

Ivey is annoyed that people check their Blackberries at the dinner table, but he hates that corporations today are wringing record profits out of employees who are working more but earning relatively less. A four-day workweek, he posits, would push back against this odious feature of contemporary capitalism and “shift some of the time-saving benefits of high-tech devices to workers.” And that would create “extra time in which to connect with politics, new knowledge, community, heritage, religion, and family.”

On the other hand, with more time we could all just do some more shopping.

Ivey reserves a special ire for consumerism, the advertising industry (an “envy-creating machine” that has led us to equate “spending and buying” with “achievement and happiness”) and its handmaiden, television (“a medium that distorts daily life like a low-grade infection”).

Ivey has a dim view not only of TV but also of the Internet, and one senses that he really believes civil society functioned better and people enjoyed their “free” time more in the predigital era.

Ivey’s glass-half-empty view of technology brushes aside the idea that a billion people have chosen to sign up for Facebook accounts, because on some level, it’s fun. More important, he ignores the positive effects web-based networks like WikiLeaks, MoveOn.org, and Twitter have had on our shared “value space.” Governments can’t hide dirty secrets as easily; low-dollar donors can mobilize to counter Super PAC money; and dictators in the Arab world and beyond have been toppled by dissidents they couldn’t silence and crowds they couldn’t stop.

And while Ivey believes there is a singular satisfaction to be found in the mastering of an art or a craft, there is little acknowledgment in his book of the revolutionary way cheap, accessible digital media tools have empowered millions to create and share films, music, photos, and stories in profoundly democratic ways.

But Ivey knows (and Obama has said this too) that the antidote to what ails us today and the way to redirect the choices individuals make — about how to spend their time and their money, how to raise their kids, how to treat their neighbors — are not fundamentally legislative.

Sure, new laws are needed (and Ivey doesn’t trust the masses to vote for the right ones by referenda and doesn’t expect a third party to emerge, deus ex machina, and save us), but if America is to be returned to some Edenic bliss where we care about one another, inspire the world, and find happiness in work, family, and community, it will be because new (read: “old”) values are taught in schools, practiced in our daily lives, and reflected in our media.

And if that does happen we’ll get the new America, one that looks more like the old America and more like the place Bill Ivey wants to live.

Marc Vogl is principal at Vogl Consulting Services, working with funders, individual donors, and nonprofits in the cultural sector.