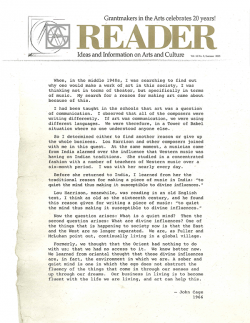 Every Dress Has Its Own Song

As Tia Oros Peters so eloquently states in her essay that follows, there is no particular word for art in the thousands of Indigenous languages of the world. While there are hundreds of Native American languages, the same holds true; Native Americans do not and cannot separate the importance of art and culture from everyday life. It is one goal of GIA's Indigenous People's Network to bring this important way of life to the fore of grantmakers' thinking. With Tia's essay, the Indigenous People's Network is pleased to launch the presentation of many viewpoints from Native American grantmakers.

This began to be made long ago. It began to be made when humankind first emerged from their many places of origin. Formed of red clay Earth, or coming from the sky, or emerging out of damp underworlds, cool lakes, deep caves or canyons, the first peoples expressed primal responses to their ancient world, their community, and the landscapes of their emergence. With good hands and the "good mind," they made art.

As naturally as breathing, the ancestors began creating art when hearing the first echoing call of a raven and then replicated its song. Art has happened a thousand other times along riverbeds when women gathered roots and sticks to weave baskets for carrying water, cooking food, and holding their round cheeked babies. This essay, and my own understanding of art began to be made during this very early era as well. It was set into motion as the original story of creation was told on a cold winter night and when the first turquoise bead was strung for a necklace. The first art openings occurred when the ancestors crushed colorful rock pigment to adorn their bodies, and when they marked significant events on the walls of cave homes lit only by firelight. As an Indigenous person, I recognize a connection to art's legacy as composed of genetic memory, an infinite webbed path of song, prayer, and storytelling.

Indigenous art is the oldest enduring tradition of creative expression that exists in the world. The earliest expressive art forms we know of including rock carvings, body painting and ground designs, which date back many tens of thousands of years in the Americas, continue to be created in our tribal communities today. Their intrinsic connection to spirituality also endures. Beadwork, basketry, literature, music, and painting are also among the many evolving manifestations of our unique cultures and distinct worldviews. These convey a paradigm founded on sacred teachings and many millennia of knowledge learned from ongoing, intimate interactions of Native peoples with the landscape where tribal emergence and daily life resonate. Such creative expressions continue to be an inherent part of Native peoples' core existence, linking the ancient and contemporary worlds and weaving together aspects of our lives, both the mundane and the metaphysical.

You may already know, and it may seem incongruent that as much as Native life is entwined with artistic creativity, the thousands of Indigenous languages of the world have no particular word for "art." Here in the Americas, in the diverse communities I serve through Seventh Generation Fund's support of Native arts and cultural revitalization, I have not yet learned of a single word for art or artist. Although so many Indigenous concepts simply have no parallel translation into English, I suspect the reason for this is not an omission in anyone's language, as much as descriptive itself of the essential place of artistry in Native American life. Art is not understood as something separate from living, from breathing, from being. Rather it is inherently a part of living, breathing, and being.

Indigenous peoples believe that a spirit pervades everything, instilling in all of us our existence and function, making the spirit world and the everyday world inseparable and cooperative. These worlds mutually interact and are true. In this symbiosis, each is reciprocally responsible to the other. In their deepest essence, everything from birds to trees, rocks to mountains, wind, and rain, has a spirit. Everything can communicate, possess a state of consciousness, and serve a purpose. It is in this way, occupying the world that links the Earth and sky, that birds are messengers that tell us what our lives have become and of our destiny. Plants and animals nourish, guide, heal, and inform our well being. The moon is our loving grandmother. Our tribal landscapes of emergence ground us in our homelands and centuries of cultural knowledge, holding the imprint of ancestral existence and assurances of our continuity.

In relation to this formula, it seems that the occupation of humanity is to link these dynamic elements of land, community, and spirit together through artistic expression. No other living being has the responsibility of creating art. Perhaps part of fulfilling our obligations as members of humanity, to our nations, clans, communities, and families, and to the diversity of Earth society, is to in some way produce art. In this way we communicate our cultural translation of the world's beauty, terror, awe, love, and anguish.

Consistent with this, we honor and know plants, animals, birds, the land and sky as our many relatives. We reflect this understanding through our multitudinous art forms. With our good hands, with our good minds, our human mandate involves creating tangible manifestations of the collective spirit radiating from the dreams, visions, and perspectives of our many relations that continually shape the consciousness of Indigenous peoples, the Native artists of the Americas. In this way Native "artists" are translators, connectors, and communicators of culture, vision, and memory.

The Native artist communicates a cultural framework and communes not only with the outside world in producing an item, but engages with and reflects the interior landscape of community, family, and self. Facing sunny windows in homes throughout the village of Zuni Pueblo, men and women work together to cut, measure, and shape turquoise and coral for the renowned and perfectly balanced silver jewelry specific to my people. Outside there is the whir of a grinder, polishing the stones, shells, and antlers for carvings and fetishes. Corn maidens with onyx eyes emerge from deer antlers; squash blossom necklaces are born from the fusion of silver, turquoise, and desert light. Children play nearby. The smell of juniper fills the air. As naturally as breathing, art is created and comes alive.

As they are produced, the artistic creations become animate and, to a certain extent, they independently possess personality and purpose that may go beyond human capacity or interpretation. This is exemplified in traditional canoe making along the Pacific Coast. When Yurok men carve out their dugout canoes, they also shape kidneys, a heart, and belly from the redwood log. These canoes take on a life of their own, often living countless decades like a member of the community. They are cared for and brought out to participate and dance in annual ceremonies. In this way, the objectivity and usefulness of art might endure far beyond its makers, taking on a communality of nature and purpose by touching the lives of many generations. Among the same people, the deerskin and shell-adorned dresses worn by girls during the healing brushdance or Earth Renewal Jumpdance ceremonies are said to have their own unique song. As the girls dance, the abalone and clamshells strike and resonate with each other. Each dress is composed of different combinations of shells, pinenuts, sometimes bells or deer hooves, and intones a distinct melody with every step in the early morning light. These dresses too are known to live a long time, dancing a hopeful harmony with the great-great-granddaughters of their makers as healing occurs.

Imbued with a collective spirit and communal consciousness, traditional arts are the convergence of land, memory, and culture brought into being with the thoughts and actions of Native artists. Fed by contemporary events and materials, Native arts continue growing and changing, reflecting our evolving peoples and cultures. Such creation remains a critical feature of traditional Indigenous lifeways on the landscape of Native America. And this continues to be made.

Tia Oros Peters serves as the special projects and program director of the Seventh Generation Fund for Indian Development and is a member of GIA's Indigenous People's Network. She is Zuni Pueblo.

The Indigenous People's Network formed within Grantmakers in the Arts in 2004 with the goal to increase cultural competency and awareness within philanthropy regarding Indigenous models of giving, values, arts, and expressive culture. It aims to strengthen the role of Native voices in GIA's programs including the annual conference and the Reader. The Network is chaired by Rebecca Lowry, program officer for arts and culture, Humboldt Area Foundation, and its steering committee includes Andrea Alexander (Potlatch Fund), Vickie Benson (Jerome Foundation), Hal Cannon (Fund for Folk Culture), Tia Oros Peters (Seventh Generation Fund for Indian Development), Lori Pourier (First People's Fund), and Betsy Theobald Richards (the Ford Foundation).