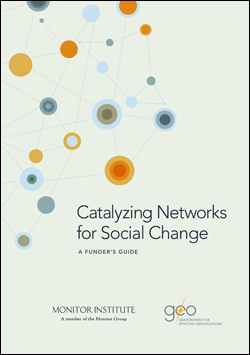 Throughout history, social change has been possible only through the contributions and dedication of many people and organizations connected in tight and loose groups. Developments such as the 911 emergency response system, widespread access to immunizations in poor countries or the civil rights movement in the United States couldn’t have happened through solitary or isolated leadership.2 Rather, citizens, philanthropists and groups of all kinds were linking actions through constantly changing constellations of relationships. Today, the complexity and scale of many social and environmental problems are growing — from climate change to failing education systems to childhood malnutrition — driven, for example, by global interdependence, turbulent political and economic contexts and constrained public resources. At the same time, there is more opportunity for social change makers to engage and connect using Web 2.0 technologies. But new technologies are creating new pressures as well — such as the need for greater transparency, speed and distributed decision making. Philanthropists are at a new crossroads of increasing fragmentation and interdependence. On the one hand, we’re living in a world where perspectives, practices and action are increasingly fragmented as people and organizations become more specialized in their interests and siloed in their actions. On the other hand, we’re living in a world that is becoming more and more interdependent as ideas, money, things and people move across boundaries of all kinds. Simply stated, philanthropists are operating in a rapidly changing, networked world where the pathways to effecting social change are far from straightforward. There is a growing imperative for funders to combine longstanding instincts toward independent initiative and action with an emerging network mindset and toolkit that helps them see their work as part of larger, more diverse and more powerful efforts. Funders know they need big platforms with diverse players to tackle the complexity of 21st-century problems. They also know that to do this work well they need to act as conveners, champions and matchmakers, connecting people, ideas and resources - in addition to getting money out the door. This means investing in more than discrete programs and more than individual organizations. It means catalyzing networks. While grantmakers have deep experience cultivating networks of all kinds - such as coalitions, alliances, place-based initiatives, learning communities - there are few recognized best practices or established measures to prove they've achieved "network effectiveness" and 21st-century approaches to catalyzing networks are still being invented. There is still much to learn, but this guide is an early attempt to create a rough map for the many individuals and foundations that are catalyzing networks in order to build and boost the impact of their philanthropy.