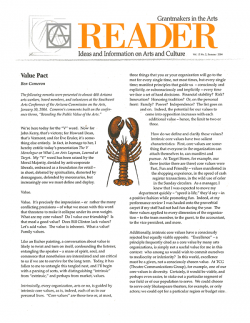 Careers in the Arts for Artists with Disabilities

Through the ages artists with disabilities have been important to our history and culture. Beethoven was deaf, Van Gogh was mentally ill, El Greco was visually impaired. For the most part we do not associate them with their disability. We celebrate their lives for the gifts of music and art that they left in our midst.

Public perception and discrimination starts in the classroom. A big concern here is an overarching one of paternalism and a teacher's inability to widen horizons and create opportunities for a student with a disability. Negative attitudes and low expectations are the hardest barriers to overcome. All too frequently negative attitudes are perpetrated by professional rehab counselors. Even professional artists who have become disabled later in life have been told they need to find a new profession. In some cases, the closest the counselors come to the arts is radio repair.

Some people with disabilities, however, do not give up on their dreams. They persevere and find a way to get the training they need from other artists with disabilities or people who are more open to them.

Mary Verdi Fletcher was born with Spina Bifida. She came from a house of actors and dancers and was determined to become a dancer herself. Impossible, you say? She is a tiny woman with strong arms who uses a manual wheelchair. Working in the face of much discrimination, she took classes in dance, and over time she founded Professional Flair and Dancing Wheels. Today this wheelchair dance company tours the world and trains dancers with disabilities that would seem to restrict their ability to dance.

When audience members see Dancing Wheels their perception of people with disabilities often shifts immediately. A small girl at a Dancing Wheels performance looked at them with much concern and thoughtfulness. All of a sudden she burst out, “Dancing!” She understood that, although this was not the dancing everyone around her had always done, it still was movement and emotion through dance. If a two-year-old child can get this, there is hope for the rest of us.

David Roche was born in a large Catholic family in the Midwest. He had a facial disability not correctable despite many surgeries. After several careers, he chose writing and acting. This was an interesting choice since he was shy about public speaking and didn't like to be stared at in public. But he figured this would get it out of the way at once, and he would get fewer stares in the future. He created a one-man show called “The Church of 80 Percent Sincerity.” Blending humor and pathos, he covered much of his journey in life. Through it we discover that being raised Catholic was for him more of a disability than having facial dysphasia. He begins his show by telling the audience to ask him, “What happened to your face?” This gets the question out of the way and enables them to relax so he can do what he does best—perform.

Fletcher and Roche are only two in a long list of people who have overcome public perception and can help us as a society accept and applaud artists with disabilities. In each case, artists with disabilities have been forced to go it on their own—to create their own work and promote it to the public as education and also as art. It is harder if their aim is to be cast in a mainstream show that is not about disability or to join a company of dancers who encourage only those with two legs. Even in a show about disability, casting directors will inevitably cast a non-disabled actor in a disabled role. As a society, we still have a long way to go to accept and welcome the talents of artists with disabilities. Until then we will lose many gifts.

One ray of hope for emerging artists with disabilities is the Statewide Forum on Careers in the Arts program sponsored by VSA arts, the National Endowment for the Arts, and the National Arts and Disability Center at UCLA (NADC). Dr. Olivia Raynor, director of the NADC, has been the guiding light for this program. According to Dr. Raynor, “Advancing careers for people with disabilities in general, and in the arts in particular, requires the commitment and engagement of a wide range of stakeholders at the federal, state, and local level.” In a recent report, Dr. Raynor states:

In 1998, the NEA in partnership with three federal agencies—the U.S. Department of Health and Human Services, U.S. Department of Education, and the Social Security Administration—convened the National Forum on Careers in the Arts for People with Disabilities at the John F. Kennedy Center for the Performing Arts in Washington, DC. Present at this groundbreaking event were 300 artists with disabilities, arts administrators, leaders of the arts, educators, rehabilitation professionals, and policy makers. Its purpose was to assess the state of education and career opportunities for individuals with disabilities, and to identify strategies to reduce and overcome obstacles. Subsequently, three follow-up summits focusing on arts education, arts administration, and vocational rehabilitation were assembled to determine specific projects to advance education and career opportunities in the arts. A final meeting on November 30, 2000 prioritized all of the recommendations and strategies that had been generated. Three initiatives resulted on the basis of these recommendations, the Careers in the Arts Mentoring Project, ArtsBridge, and the Statewide Forums for Careers in the Arts.

Again, according to Dr. Raynor:

What is most significant about this initiative is that, as a result of the partnerships and collaborations established, long term activities in support of careers in the arts for people with disabilities were established. Some activities, such as those in Minnesota, are oriented to provide specific training and support for the individual artists. Other states, like Hawaii, are working with their state legislatures to draw attention to creative industries as important for the employment of people with disabilities.

As we look at careers in the arts, the talent of artists with disabilities should not be the first question. Instead, our first concern should be changing a society that does not encourage and nurture those talents, and enabling more people with disabilities to express themselves artistically and professionally. At the Mississippi Forum for Careers in the Arts for People with Disabilities, performer Jaehn Clare said:

Every time I perform—either “Tail Tell Tale” or “Belle's on Wheels”—it's always interesting to me to hear from people who are surprised to see me getting into and out of my wheelchair, moving around on the floor, and moving my legs even a little bit. So many non-disabled people assume that being disabled means you cannot move your body at all, and that creative physical movement is just not something that we do! As audience members, it is so important that we focus on an artist's abilities and not on the disability, which we are probably not qualified to judge.