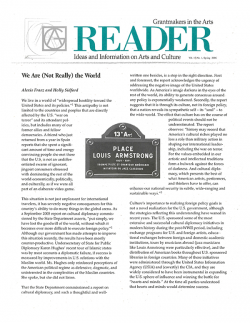 Can Culture Save Downtown?

The reasons that museums, galleries, theaters, and concert halls have come to play such a central role in urban renewal are well rehearsed. They provide a context for the highly expressive and iconic architecture that is so central to the branding of a place; and in a privatized, secular, fragmented, post-modern world they are one of the few candidates for public space that can provide a more communal feeling than the circulation areas and car parks attached to shopping malls. Sports stadia and public parks perhaps bear a similar civic burden.

The contribution that certain overwhelmingly successful arts buildings have made to the brand definition and revitalization of urban areas — the Guggenheim in Bilbao, the Tate Modern in Southwark, and most recently Disney Hall in downtown Los Angeles — has encouraged a rather naÃ¯ve “copycat” strategy in many cities throughout the world. This approach is almost certain to fail in cases where the following three factors are neglected.

First, culture cannot revitalize downtown alone. Where cultural infrastructure plays a role it plays it alongside public and private investment in other civic amenities, transport systems, and housing. The Brookings Institution, in a recent regeneration-by-numbers primer Turning Around Downtown: Twelve Steps to Revitalization1, puts “Create an Urban Entertainment District” as Step Seven, slightly ahead of housing and retail but well behind the creation of a Business Improvement District. That's probably about right. Disney Hall is part of a major initiative that has a further $1.2 billion of public and private investment earmarked for Grand Avenue. Tate Britain is part of an integrated revitalization of the South Bank of the Thames river. It is depressing, however, how often significant investment in cultural buildings is made outside of an integrated urban renewal strategy. These cultural institutions then come to bear impossible expectations alone and without context.

Second, the cultural building boom has not been driven by “consumer demand” in the sense of an increase in audiences. Global cities like London, New York, Los Angeles, and Tokyo have a density of population in their immediate catchment and a sophisticated cultural tourist market that smaller cities cannot match, and yet many “supply driven” infrastructure projects do not take this into account. Large-scale arts buildings have recently been opened in Madison, Dayton, Denver, and Omaha; new ones are in the pipeline in Miami, Dallas, Orange County, and Nashville. Given the economics, it seems likely that these buildings will have a major adverse impact on the wider ecology of the arts in these communities as they preempt and siphon off existing audiences and philanthropic resources rather than generate new ones. This is hardly the regenerative function that the planners will have had in mind.

Third, vibrant arts centers require thriving occupants if culture's role in revitalizing downtown through generating social capital is to be realized. In the Faustian pact between cultural organizations and urban planners, both parties have tended to gloss over the longer-term financial impact of expansion on the resident organizations while playing up the economic impact on the community as a whole. But struggling arts organizations, seeking to meet the increased fixed costs that come with a highly specified new building, are unlikely to deliver on hopes for wider community revitalization.

The antidote to naÃ¯ve optimism with respect to the contribution of culture to urban regeneration is not unqualified and jaded conservatism, but greater due diligence by both arts organizations and public agencies responsible for renewal strategies.

Arts organizations contemplating a potential role in urban regeneration would be well advised to:

• Look at your options from a simple perspective: Will the opportunity increase or decrease your organization's ability to fulfill its mission and realize the full potential of its programming ambitions? Without constantly referring back to this test, it is easy to get caught up in the chase and the dramas of building.

• Look at the long-term viability of the plan. “Sufficient unto the day” is not good enough, and very few organizations have sufficient political support to go back to stakeholders after the event and persuade them to increase operating funding to a level where it is possible to thrive (as opposed to survive) after the initial thrill of the building opening has passed.

• Consider how you would respond to the worst-case scenario as well as the best. Obvious risks are delays in the completion of adjacent infrastructure or uncontrollable changes in the plans for adjacent buildings (from high-end residential housing to shelters or from restaurants to offices etc.). Remember that everyone is selling, not just you, and so the conversations are often about best cases instead of most likely cases.

• Have a Plan B and know at what point Plan A has deteriorated to such an extent that it is no longer appealing and Plan B should be triggered. Do not hold onto the remains of Plan A because of the time and moral capital invested in it. Fears about loss of face make for a weak negotiating position.

• Accept from the outset that your organization's agenda and the urban agenda overlap, but they are not identical. There are things you care about and need to protect that a development agency does not and vice versa. Do not resent the differences, just ensure that the common (and uncommon) ground is fully understood.

Public agencies wishing to use culture as a policy tool are well advised to:

• Reflect on the financial and organizational fragility of most arts organizations and the fact that they are ill equipped to weather radical changes of plan or timetable. Try not to jerk them around.

• Remember that when you describe yourself as a “partner” in the process they take you at face value and will expect you to honor the usual conditions of partnership — that you keep communication channels open and keep commitments made. If the commitments are implicit, make them explicit.

• Understand what you want out of “culture.” It is not an undifferentiated mass. Different art forms and different scales of activity work better and worse in different contexts (hint: sometimes it's not a building).

• Work with what you have got. If culture is to play a role in both the physical fabric and the social texture of renewal, then it is critically important to work with and build on the existing cultural infrastructure rather than displacing it through “trading up.”

Adrian Ellis is a consultant with AEA Consulting, a company that specializes in cultural planning. This article is based on a presentation made to the October 2005 Grantmakers in the Arts conference called “Can Culture Save Urban Centers?” It was published in The Platform (Volume Four, Number Three, November 2005)
http://www.aeaconsulting.com/site/platformv4i3.html.