The Future of the Arts in the United States 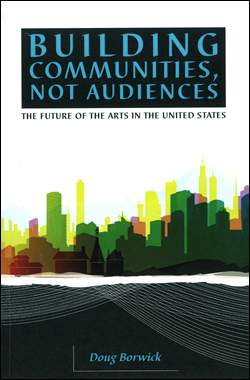 Doug Borwick has published a bold, unapologetic argument for moving the arts from their Eurocentric base toward a position more relevant to changing demographic communities across the country. Whether or not you agree with Borwick’s thesis that the only way for arts organizations to save themselves is to address community needs as a primary part of their mission, the twenty-two contributors to Building Communities, Not Audiences, including Ben Cameron, Russell Willis Taylor, Barbara Schaffer Bacon, Pam Korza and Diane Ragsdale, among others, present a wealth of ideas and information intended to support that thesis. James Undercofler, for example, gives a particularly informative synopsis of the various models arts organizations reflect, and might consider, using. William Cleveland (the “Don” of the Community Arts movement) offers a valuable entry on mapping the terrain, and Margo Gard Ewell shares a useful historical perspective on the idea of community building and the arts.

Borwick takes the notion of the role the arts ought to play in building communities significantly further than the current dialogue that centers on creative placemaking. Starting from the proposition that “the number of established not-for-profit arts organizations that are actively engaged in on-going substantive partnerships with members of their communities outside of the arts is tiny,” he suggests that the field needs to begin what will be a long process of embracing real community involvement by placing the arts at the center of addressing community problems and needs. This will be a hard sell to a large portion of our field, but there is movement in various quarters of our ecosystem to begin that process of engagement. The focus is on organizations, not artists, and likely adds to the current debate as to whether artists are too often lost in the mix of what they do. The difficulty in “proving” the necessity of a dramatic shift away from a legacy of one cultural approach to others — a necessity born of shifting demographics — will likely add to the debate about how we “prove” any of the propositions we put forth. And the embedded argument to reconsider the model that best suits the future of the arts will add to that debate. Borwick’s book makes for a very good starting point for the discussions that will undoubtedly ensue.