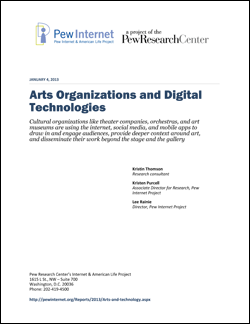 A survey of a wide-ranging mix of U.S.-based arts organizations shows that the internet, social media, and mobile connectivity now permeate their operations and have changed the way they stage performances, mount and showcase their exhibits, engage their audiences, sell tickets, and raise funds.

These organizations are even finding that technology has changed the very definition of art: 77% of respondents agree with the statement that the internet has “played a major role in broadening the boundaries of what is considered art.”

“For most of these organizations, technology suffuses their operations and their engagement activities with their communities,” noted Kristen Purcell, research director at the Pew Research Center’s Internet & American Life Project, and a co-author of the report. “They are using the technologies to expand their offerings, grow and diversify their audiences, and bring technology users into the act of creating art itself.”

Some 1,244 arts organizations that have received funds from the National Endowment for the Arts (NEA) in recent years took this survey.

The survey results reported here are based on a non-probability sample of 1,258 arts organizations that received funding from the National Endowment for the Arts (NEA) in the years 2007-2011. Of these 1,258 organizations, 1,155 completed the entire survey; all percentages reported are based on those answering each question separately. The sample is not a probability sample of all arts organizations because it is not practical to assemble a sampling frame of this population. Instead, Pew Internet submitted a Freedom of Information Act (FOIA) request to the National Endowment for the Arts (NEA) to obtain the list of all arts organizations that received grants from the NEA during the 2006-2011 time period. Several individuals from the same organization may have been awarded NEA funding during that time period, thus the sample file Pew Internet received included 5,773 grantees representing 3,644 separate arts organizations. To improve response, advance letters and email invitations to participate were sent to the full list of grantees, and grantees were asked to coordinate with colleagues so that each organization completed the survey only once. The final sample includes organizations of all sizes, from very large to very small, with widely varying operating budgets, staff sizes, and organizational missions. It also includes organizations from disciplines across the arts world. Though there is no national registry against which we could compare this sample, it is possible that it skews toward larger and older organizations compared to all the arts organizations in the country. The nature of the sample also means that smaller organizations among the grantees will have a bigger voice in the survey since they tend to be more numerous – and yet may serve smaller numbers of people in the aggregate. This is inherent in any organizational survey that includes organizations of very different sizes.