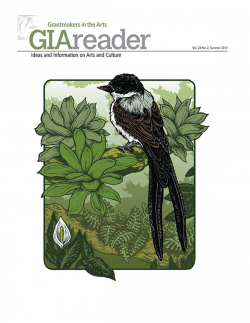 Preserving the Soul of America

There are many arguments for continued federal funding to the National Endowments for the Arts and the Humanities (NEA and NEH), the Corporation for Public Broadcasting (CPB), and the Institute of Museum and Library Services (IMLS) — all agencies that would be eliminated by President Trump’s 2018 budget.

We could argue that the “creative economy” relies on artists, historians, and storytellers. We might mention that government dollars incentivize the contributions in local communities for concerts, festivals, exhibits, and celebrations, and we could emphasize the taxes paid on hotel rooms, restaurants, and shops that benefit from these events. We could focus on children and the fact that education in the arts, proven to keep kids in schools and raise scores, is not available as regular curriculum in our most impoverished school districts, both in inner cities and rural areas, and that these federal agencies all play a great part in providing those services.

We could talk about all of that. But at GIA, we see a bigger picture. We see a government that may turn its back on a private-public partnership of over fifty years. Since the inception of these agencies, private foundations have supported arts and culture knowing they were acting in tandem and as a “business investor” with the federal government. Every sector that touches the lives of those living in America has an ecosystem that sustains it. For over fifty years, the nonprofit arts and culture community has grown and flourished on a multi-pronged approach for its business model. Government, corporate and private foundations, and individuals have sustained the nonprofit arts and culture sector, which provides programming in everything from therapy for returning veterans and preservation of our nation’s treasures to reading programs in libraries for homeless children. GIA’s membership consists of very large and very small foundations, corporate giving programs, community foundations, and government agencies at the national, state, and local levels. Yes, the National Endowment for the Arts is a member of GIA.

We also see a federal budget, which directly reflects the country’s values, that would devalue our nation’s cultural history, the creative spirit that has made this country so powerful, and the concept of widespread access to ideas and knowledge. At the very basis of arts and culture is the celebration of the individual spirit, which connects with a greater collective to produce ways for us to remember, learn, celebrate, mourn, and take pride in ourselves.

If these federal agencies are eliminated, we know that our private foundation members cannot make up the difference. And even if they could, they have no coordinated mechanism to do it, nor are their missions to provide arts and cultural experiences to every American adult and child. They are often geographically constricted to a city, region, or state. The few national arts and culture funders provide support primarily in large cities. Rural folks are for the most part unable to access private foundation dollars, and they are also handicapped by the lack of individual dollars in their community for these projects.

The IMLS enables the national sharing of exhibits for museums by underwriting the insurance needed for exhibits to travel from city to city, across state borders. The CPB is a media outlet supported also by states and individuals to provide access to educational programming for all. Who would coordinate interstate programs if these agencies were eliminated? This kind of coordinated effort to ensure access for all is the role of the federal government.

Like our national parks, available for all to enjoy, our history, culture, and art are of great value to Americans. They are the soul of our nation and the conscience of our people. The elimination of these federal agencies would send the message that Americans don’t care about their history, their culture, and their art. At GIA, we know that is not true. We urge Congress to support these agencies, which provide so much in research, coordination, and policies in support of a creative America.