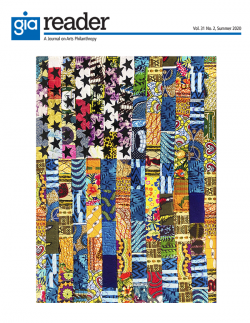 A Pandemic, a Movement, and an Agenda for Change

When the novel coronavirus pandemic hit, like most people — and especially in my role as co-chair of the GIA Racial Equity Committee, with colleague Randy Engstrom, director at the City of Seattle Office of Arts and Culture — we agreed we wanted to say something to address the loss of life, ways of life, and the devastation the arts community was experiencing. While we literally work on opposite sides of the country, and in very different environments — Randy a public funder and me at a private foundation — we like most of our funding colleagues, sprang into action to get much needed resources to our grantee partners.

We are proud to be part of the extraordinary efforts by arts funders around the country in this moment of deep upheaval like the COVID-19 Arts & Culture Relief Fund seeded by the Bonfils-Stanton Foundation and administered by the Denver Foundation or the NYC COVID-19 Response & Impact Fund in partnership with the New York Community Trust to establish funds to support individual artists and arts organizations that have provided critical financial resources as earned income streams dried up and were forced to close until it is safe to re-emerge.

We have been especially concerned for the ALAANA culture workers and organizations that are most vulnerable during a crisis like this pandemic and that have the most difficulty recovering from catastrophic fiscal challenges, due in large part to systemic and chronic undercapitalization. As Randy reflected, his agency has done significant and impactful work in helping to build and sustain the Seattle region’s cultural sector, but the investments and programs over much of its 50-year history contributed to structural inequity that privileged certain forms of expression over others, a White supremacist system, both as a government agency and an arts funder. And, while the Dodge Foundation has been on an equity journey for the past few years and adopted a new strategic plan that centers equity, we have more work to do to create the conditions for an equitable New Jersey, our home state.

Then in the midst of writing this piece, George Floyd’s murder by a Minneapolis police officer was captured on video for the entire world to see. Communities across the country and around the world organized to protest against the police brutality that left Floyd and countless other unarmed Black people dead on our streets. American cities exploded with the chants, pain, anger, and disbelief that once again, we faced the injustice of those that swear to protect and serve, betraying that sacred trust. We are reminded that although many strides have been made, the fundamental conditions — especially for Black people and also other ALAANA communities — have not changed. The same issues that created waves of civil unrest across the country in ’67 still exist in those and other communities today.

The events of the last few months have been extraordinary, and as Randy shared within his agency, while great strides have been made to change the systems within which we operate, the urgency of this moment calls for us to move past incrementalism and push for structural change.

Trainings and statements are no longer enough, and perhaps have never really been enough. We must shift power and resources to ALAANA communities, honor and center their leadership in organizing and designing programs, and center their voices in governance. We know what to do; we have a roadmap. In response to the pandemic, we practiced trust-based philanthropy, got resources to grantee partners with fewer strings (many of using an equity lens), shifted project grants to general operating support, and relaxed or eliminated reporting requirements. The COVID-19 crisis exposed the fault lines of this country, hiding beneath our business as usual frame, and has given us one of the most dramatic opportunities to seize the moment and the momentum to reimagine our systems and rebuild them equitably.

Randy Engstrom is director of the Office of Arts & Culture for the City of Seattle and co-chair of the GIA Racial Equity Committee.

Sharnita C. Johnson is director of Arts at The Geraldine R. Dodge Foundation and co-chair of the GIA Racial Equity Committee.