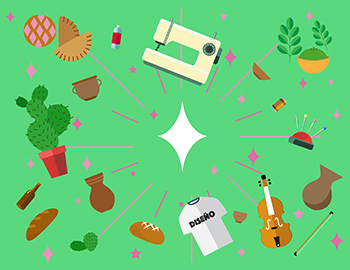 Las Imaginistas is the kind of collective I dream of — rooted in community, non-hierarchical, daring in the challenges it is willing to take on for the greater good of community. At Sunday’s preconference panel, ArtPlace America’s Arts and Immigration Field Scan, Christina Patiño Sukhgian Houle, co-founder of Las Imaginistas, brought us into the future-world she helped the border community of Brownsville, Texas, dream into reality. She outlined the two-year, ArtPlace-funded project in Brownsville in three phases: Permission to Dream, Permission to Know and Permission to Act.

For context, here is more on Las Imaginistas, in their own words:

Las Imaginistas are a socially engaged art collective working on the US/Mexico border in Brownsville Texas. Their name is a mash-up of the word imagine/ imagination/ imagining and ‘Zapatista,’ a Mayan group fighting for indigenous rights in Southern Mexico. The collective uses the radical act and power of imagining as a tool to build more just and equitable futures.

The group upends traditional planning processes by enthusiastically folding in community insights into every phase of their work. Community members are not just involved in Imaginistas projects, but they are co-designers and co-collaborators of the projects themselves. Our practice places a strong emphasis on the radical act of Dreaming. We dream, we build bridges, we build community capacity, and we take action to embody and construct new futures. This section is intended to give insight into our methods and practices

As both the cofounder of an art and music collective and an urban planning professional myself, being introduced to the work of Las Imaginistas was like coming to a bridge between my own worlds that I could have never pictured being built. In particular, their project, Taller de Permiso (Permission Workshop,) struck me as so revolutionary, yet so in-plain-sight. Because many of Brownsville’s residents’ financial stability is tied to an informal economy, they are also faced with unnecessarily complicated red tape from the local government’s permitting processes. These local entrepreneurs and small business owners rely on the ability to produce and sell prepared foods and goods to keep their community economy thriving, but have been put in precarious financial situations when a lack of a city-government sanctioned permit results in hefty fines.

In response to this unnecessarily punitive situation, Las Imaginistas supported Brownsville’s micro-economy with a community-led campaign to dismantle the power of complicated city codes, re-imagine what it means to support a thriving economy on a community’s own terms, and create its own permitting system — all woven together with the belief that a community can give itself permission. Through this process, Brownsville was able to challenge the colonial structures of government while dreaming up its own version of an economy that, however “micro” or small in size, could reflect and celebrate the culture of the community while also supporting its own interpretation of economic development.

In the spring of 2019, I worked on a mayoral campaign here in Denver for Kalyn Heffernan, the first queer, activist woman with a disability (who is also a current, touring musician and rapper) in our city’s history to seek political leadership. As a member of Kalyn’s “Kitchen Cabinet,” I was committed to collaboratively reimagining what it meant to campaign for office. We circumvented many of the “traditional” markers of success for a campaign — like raising the unspoken but required thousands of dollars needed to be taken seriously as a candidate by local media (and in turn, be able to “pay-to-play” in many media and organization-sponsored mayoral debates.) Much like Las Imaginistas, we used art and a vision of a future we wanted to see for ourselves as our method and guide. We sought to create a more accessible pathway for future candidates like Kalyn who may not have the political, financial or other white-shoe firm connections we had been told were needed to succeed in a bid for a role in politics — which is, in theory, about public service and community representation.

When community members give themselves permission to dream the kind of city they want to live in, the kind of economy they want to build or the kind of political representation they want to see, so much beyond accepted (and forced) colonial frameworks is possible. Las Imaginistas embodies and facilitates the future — and present — of what city planning could be, what economic development could look like, and how radical the act of permission can be.