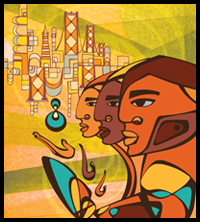 Submitted by Barry Hessenius on October 13, 2011

The final day at any arts convention is usually a little anti-climatic.  People are checking out in the morning, some off for early flights; others are staying over to see friends or play tourist — there are good byes and promises to be better at staying in touch; vague expressions of follow up on mutual projects — some conceived this week after food and drink; and last look arounds to see if you can find long lost friends who are listed on the participant list, but who inexplicably you have not crossed paths with in three days.  There are, of course, scheduled sessions and the obligatory final plenary or meal.

I went to a session supposedly on one of my pet interests — Building a Larger Table:  Cross-Sector Collaborations in the Arts – organized by two capable and unquestionably bright stars in the arts firmament, but alas for whatever reasons – this session didn’t deliver.  From the title I assumed the gist of the presentation would try to center on how you can build that larger table and include case examples of what works and what doesn’t in making cross-sector collaborations happen.  I had hoped that there might be a cogent, organized presentation of some basics for successful cross-sector collaborations, or at least a set up that would have encouraged some deeper discussion that would drill down to some of the obstacles encountered, and the means for overcoming those obstacles in attempting to make this kind of thing work.  In conversations during the break with other people who sat in on this session, there seemed consensus that it just didn’t work.

There were some pearls of wisdom but you had to reach to find them, as the presentation tended to wander and ramble and seemed to lack focus.  One of the lessons that was mentioned – ironically then – was that “focus” is an essential element in forming successful, workable collaborations.

Two other quips caught my attention:

1.  I’m not sure what this was used for, but I love it as a title for an effort:  “Building a Base Before the Next Crisis.”; and

2.  Everybody involved in the effort to establish a collaboration has to believe that it is a cause worth fighting for.  That is a lesson that can be, and I suspect, often is overlooked.

I think collaboration is such an important issue for funders that I hope GIA continues to include it as subject worthy of devoting time, energy and session time at conferences.

I dropped in on the tail end of Richard Kessler’s session:  The Challenge of Change:  Public Policy Advocacy for Arts in Education, and I just want to mention Richard’s spot on part plea / part admonition to GIA members to fund those who are trying to work in the policy arena to change public policies to embrace arts education and the other priorities that we share in advancing our sector.  He cautioned that if funders don’t fund that kind of activity –  the advocacy in the trenches and the work to make public policy reflect both the value of the arts, and the needs of those engaged in nurturing and facilitating that value – then it will not happen.  And that for us to advance arts education it must start with our involvement in fashioning public policy.  We cannot and will not move arts education anywhere near where we want it to be, if we do not engage in changing public policy.  He also asked funders to ask themselves what their role – collectively as part of GIA – which is the trade association of the arts funder world – should be.

Janet Brown was in the session, and as much as anyone in the field, she understands exactly what Richard was saying.  She knows the essentiality of being involved in public policy formulation and she knows from practical experience how it works, and why collective ‘concerted’ action is necessary to compete with other sectors that have their own agendas and demands that vie for public policy decision makers to address.  One challenge for GIA will be to determine for itself how far it wants to leverage the power of its collective voice in this area.  My sense in talking to people over the past three days – from the far corners of the arts funding world – is that an increasing consensus in support of working more together in collaboration is becoming apparent, and that while individual funders are trying to find solid ground on which to stand within their own worlds, they are paying more attention to being part of this larger world together.  There are some very, very smart people involved here, and as Richard Kessler reminded them: they are the only ones in the room who really do not directly benefit from taking a stand in the policy arena — other than moving things forward.  I hope GIA members can overcome the hurdles of convincing their own boards that support for policy formulation makes sense, and that GIA – as the trade association for arts funders – can play a logical role in leveraging the combined strength of its members.

My take-away from this conference is that the arts funder’s legacy of acting pretty much alone is no longer thought to be the preferred way to approach goals, and certainly not  a viable way to deal with the “velocity of change” that was the theme of the gathering.   I think the potential of this sleeping giant may in the not too distant future surprise even themselves.

On a personal note (and another reason I like these gatherings) —  I was able to corral several people whom I have wanted to interview for the blog, and now have those commitments (some good stuff coming up in the future).    So I enjoyed myself this week.   Had some very good conversations, saw old friends (Olive Mosier I looked and looked for you and I am so sorry I didn’t get a chance to spend some time with you), I laughed, learned some things, and came away optimistic.  And but for some rain on Monday, the city shined (I was right, wasn’t I Daniel Windham?)

Safe journeys home to all those who came to our city.  Thanks GIA.