Sixteen years ago when venture capital frenzy was sweeping the country, the Andy Warhol Foundation for the Visual Arts and its partners decided that our nation’s boldest, most inventive creative artists would also benefit from many aspects of the venture capital (VC) approach, such as providing comprehensive, flexible, and ever-evolving structures of support. They launched Creative Capital and hired Ruby Lerner as its founding executive director to lead what was touted at the time as a major new experiment in supporting individual artists. 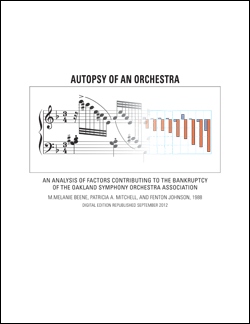 Grantmakers in the Arts and Melanie Beene are pleased to provide this republished digital edition of the seminal report, Autopsy of an Orchestra.

Read More...
Fiscal Sponsorship Is Maturing as a Field
October 27, 2010 by admin

Cautious, longtime grantmakers may recall the stir created in 1989 by John Edie, the Council on Foundation’s attorney, when he wrote Use of Fiscal Agents: A Trap for the Unwary. This report, unfortunately, cast a shadow over the concept of fiscal sponsorship that still lingers in some quarters. Since that time, however, and across the past twenty years, the practice of fiscal sponsorship has continued to grow, organize itself, and become increasingly sophisticated.

Melanie Beene will guide (and perhaps goad) us as we explore the sometimes competing interests raised through GIA's 2003 Field Inquiry. Where are the edges that distinguish our interests one from another? What are the lines that draw us together? How can GIA best use its resources on behalf of arts grantmakers so you, in turn, can strengthen the place of arts and culture in our communities? Between January and June 2003, GIA conducted a members survey and listened to members and other arts grantmakers in sixteen cities.

Read More...
Michael Morgan's Rx for Orchestra Health
August 31, 2007 by admin
The design of GIA's 2007 conference is based on one used in 1993 for a conference in La Jolla, when papers published as the book Alternative Futures fostered lively discussion. We've invited back two authors from that 1993 publication, consultant M. Melanie Beene and conductor Michael Morgan, to revisit themes from their earlier pieces. We reconnected these two particular writers with their shared story in mind.
Read More...
No Slow Fix, Either
February 2, 1996 by admin