I Keep Telling My Son, There Were Geniuses Living Here: Creative Placekeeping as Record and Witness

This post is part of the series, Future of the Field: Cross-Sector Creative Placemaking Series. 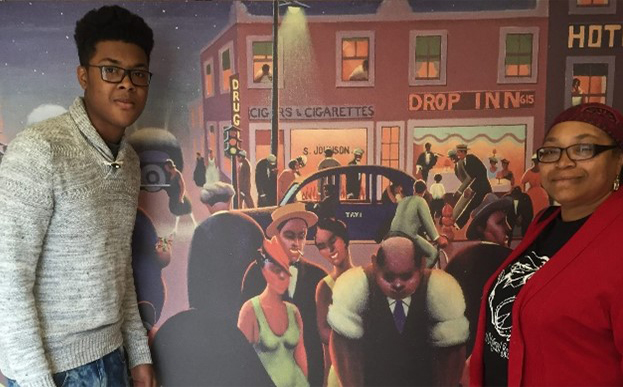 Chicago residents are known for keeping score. They take note of who is allowed seconds before others have gotten firsts. Before moving here nearly twenty years ago, I had never heard people on public transit casually talking about city building projects or neighborhood investment initiatives. But here in Chicago, where disparate municipal funding has contributed to double-digit differences in life expectancy based on zip code, playing tit for tat has become a baseline for community advocacy.

I was mindful of this a few years ago when as deputy commissioner of Chicago’s Department of Cultural Affairs and Special Events (DCASE) my team was asked to activate a dormant space across the street from a new shopping plaza development in the city’s Englewood neighborhood, an area the media had synonymized with high poverty and blight. While many were touting the building of a new commercial strip as the signal of a “new day” for the community, it felt important to temper that with a reminder that its origin story did not begin with the arrival of a few new big box stores.

Architect Katherine Darnstadt had already worked with the city to place one of her signature “boombox” shipping containers on the site. Developed to be used for everything from retail pop-ups to arts activation, the mobile storefront was perfect for our goal of using the space to reflect community identity. As ArtPlace’s creative placemaking research underscores “the built environment sends powerful signals about who belongs in a community.” An Archibald Motley exhibit at the DCASE-curated Chicago Cultural Center downtown had generated high foot traffic, but few of them from the Englewood neighborhood where he and other notable Black artists such as Eldzier Cortor, Charles White, Margaret Burroughs, and much later Lorraine Hansberry had been reared.

As is summarized so clearly in ArtPlace’s active archive, Creative Placemaking Research, within reflecting community identity, we know that arts and culture can and does “honor and stabilize existing communities – particularly those who are marginalized or facing the threat of displacement.” To do this, we chose to steer some of the attention that a retail strip was bringing to the community towards Englewood’s largely forgotten history as an incubator of Black artistic and cultural production. For the first six weeks of ribbon cutting ceremonies and pilgrimages to this new commercial oasis, DCASE turned the empty shipping container into the “Street Corner Museum” and activated it with reproductions of Motley’s work and the story of coming of age in Englewood. 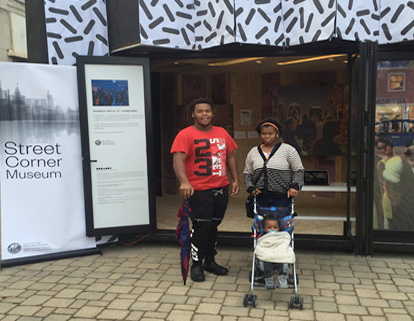 I was lucky enough to help ideate and oversee the project with the DCASE team and serve as a docent. Set directly opposite the retail development, the museum was on the path that many of the neighborhood residents would take to get there. They would share their fears that the advent of the sores would lead to gentrification and displacement and I would register the change in their demeaner that, once invited to tour the Street Corner Museum, would take hold when they realized that Motley was a product of their neighborhood. I remember a woman walking in and leaving suddenly after a few moments, only to return with a teenage boy in tow, “I keep telling my son, there were geniuses living here,” she said. “Everybody only sees the bad things that happen in Englewood. I try to tell him there are some very important people who grew up here.”

Years later, I still think about those six weeks with the Street Corner Museum and how effectively the act of recording and witnessing countered the narrative that places like Englewood are waiting to be “made” or “created.” Perhaps they just need to be remembered.

(Both images of Englewood neighborhood (Chicago) residents at the Street Corner Museum taken by Tracie D. Hall in 2015.)