The Importance of Narratives in Cultural Impact and Advocacy

At the EDGE Funders Alliance 2018 conference, I had the experience of sitting next to a stranger at lunch and introducing myself as President & CEO of Grantmakers in the Arts. He asked me, “Why don’t funders fund just plain art anymore?” When I asked what he meant, he responded with a story.

My friend is a composer. He went to school to study music composition, took on a lot of student debt. I have other friends who run large institutions. And now they can’t secure any grants because all anyone funds is art concerned with social justice and with communities of color. But they’re just white guys who make and exhibit art about beauty. So they can’t get any philanthropic support.

I began my response by explaining that his initial premise — that only art concerned with social justice and communities of color is supported philanthropically — is simply untrue.

The vast majority of foundation funding supports large institutions that present works of the Western European cannon and whose audiences are predominantly white and upper income. Many of them house or showcase work from around the world and serve students from different economic backgrounds, but none of them is rooted primarily in non-European aesthetics or are founded and run by Asian, Latine, African, Arab, and Native Americans (ALAANA). 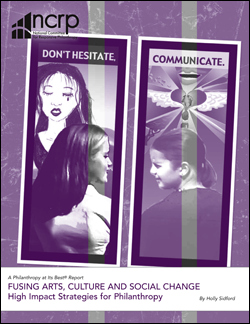 A much smaller percentage of cultural philanthropy supports the arts of non-European cultures that comprise an increasing part of American society. An even smaller fraction supports cultural activities that explicitly propel movements for greater social justice. According to Helicon Collaborative’s 2017 study Not Just Money, this inequality has only expanded.

The gentleman with whom I was speaking seemed upset. “Well then — why do we have to keep talking about art and social justice and communities of color?”

I asked him what his foundation funded. “Environmental issues.” I asked if his foundation was concerned about communities of color in the context of environmental issues. He answered affirmatively, explaining their support of environmental justice and their belief that low-income communities — often Asian, Latine, African, Arab, and Native American communities — are worst affected. They believed that deciding for those communities what the solutions to these issues should be and imposing those solutions from without was unjust, even dehumanizing, explaining their central value of communities’ self-determination.

“How do you address issues of scale?” I asked. He explained that was what he was doing at EDGE Funders Alliance. At EDGE, he’s learning complementary approaches to scale. The first approach was recognition that social, political, and corporate systems are complementary of each other. EDGE Funders Alliance members support advocacy for regulations on industries’ environmental practices and for more fairly distributing environmental burdens to address generations of placements of those burdens on communities of color. They also support workforce training for people transitioning out of dirty industries. These are just a few of their systemic approaches.

The second approach the gentleman was learning was supporting community-led solutions for environmental resilience, and the third, connecting those solutions to other communities, networks, and stakeholders working toward systemic change. These approaches are larger than funding this organization or that group.

Grantmakers in the Arts (GIA) was at the EDGE Funders Alliance conference to co-present a workshop with the Surdna Foundation and National Performance Network/Visual Arts Network on how arts funders and environmental funders are working to recognize the racialized systems and structures within our fields we have created and continued to maintain and to replace those philanthropic systems with new ones. I and GIA believe that the cultural community is an engaged part of our larger society, has systems and structures to update and replace, and can play a part in all forms of social change. We are clearly not alone in this belief. We certainly all know arts funders who are doing exactly this and many who are striving toward this. Our live tweets of the workshops received over 5,000 social media impressions.

As for the gentleman whose friend was struggling as an artist, why did he believe that social justice and communities of color — the recipients of the smallest amount of arts philanthropy support — were to blame for his friend’s lack of success? Because of the power of narrative and storytelling. Because of the power of art. The statistics did not matter the way the story mattered. He could see and feel phenomena that cohered into a story in his mind and heart, which resonated with his emotions. “My friend is not the success he deserves to be. People talk about art and social justice and communities of color. Therefore, my friend is not a success because of social justice and communities of color.” The elements of these stories are real and emotionally resonant — his friend’s struggles, the amount of dialogue about art and social justice. His need for story is what caused him to conflate these issues.

Nationally, these are the stories that have fueled a backlash against communities of color, immigrants, women, the trans community, and countless others. How has this worked? The people fueling this backlash recognize that the things that can be seen are easier to blame than amorphous systems and structures. So, your neighbor that is doing better than you — or worse than you but better than their own parents — must be to blame for your misfortune because you can see them. That person is comprehensible in a way that a system or structure is not.

Making these systems and structures visible within the cultural community is essential to our being part of efforts toward an equitable and just society. Otherwise, the cultural community will be marginal to society. When story — an art form — is so powerful that it can cause a progressive environmental funder to believe the opposite of the facts, it must be treated with respect. Art must be supported deliberately, thoughtfully, and equitably.

Let’s take all the talk about art and social justice and communities of color and make it more than just talk. We have the opportunity to make systems-level interventions, community-level support and networked strategies the norm rather than the exception. The cultural community is wise and talented enough to make structural changes to our shared society. Let’s work together to make it action. Let’s make this our story!

EDGE Funders Alliance organizes within philanthropy to raise awareness and deepen understanding of the interconnected nature of the social, economic and ecological crises threatening our common future. EDGE works to increase resources for communities and movements creating systemic change alternatives for a transition to a society that supports justice, equity and the well-being of the planet.