The History and Memoir of Stage Fright 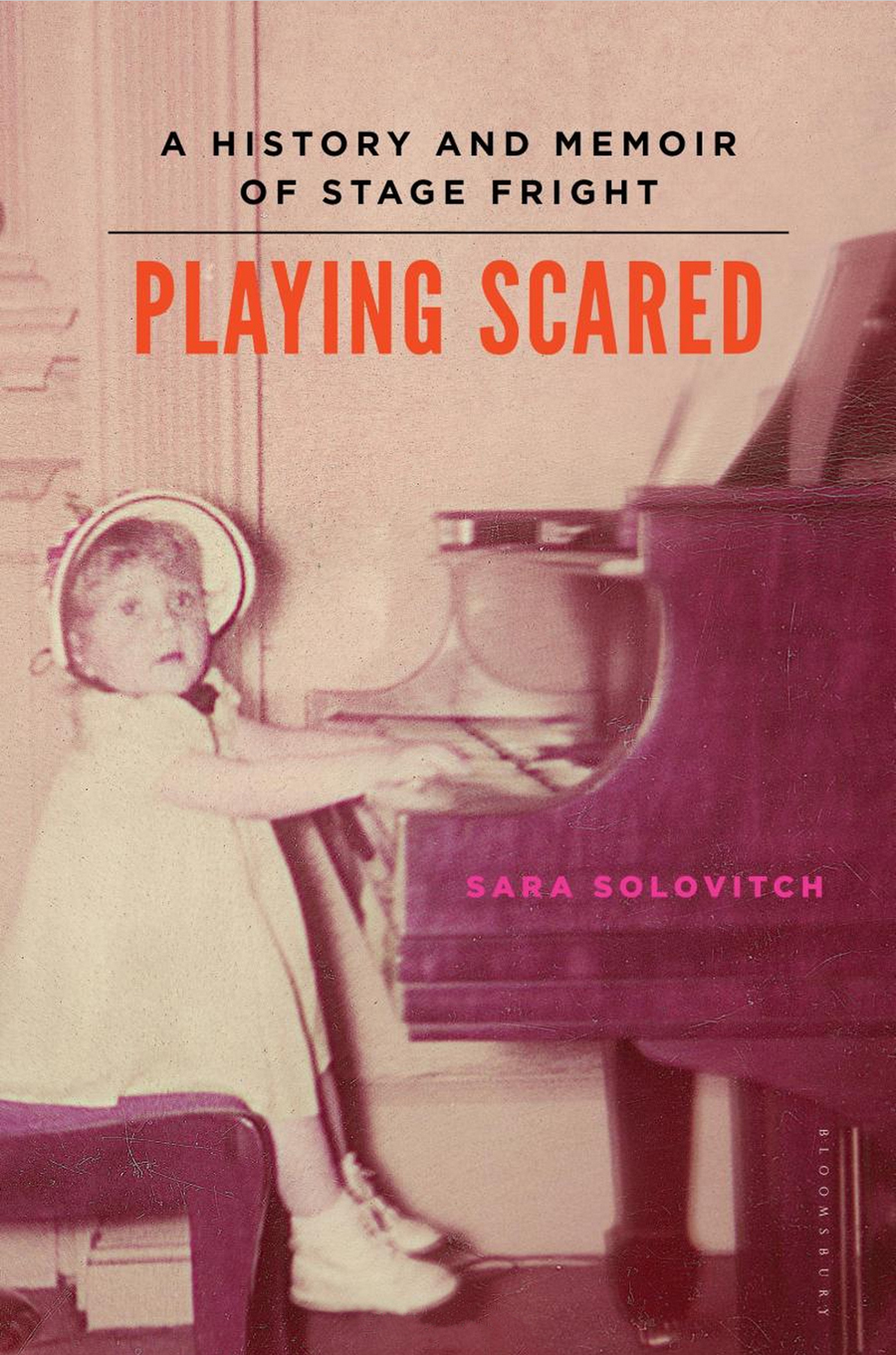 You are busy. So, to get to the point right away: If you don’t suffer from stage fright, is it worthwhile reading this book? That was my question when I read a chapter of Solovitch’s book in draft form early on. (We are acquaintances.)

The short answer: yes. (And if you do have the shakes, yes, yes.) The subtitle sums up the content: Playing Scared is both history and memoir, the result of reporting and self-examination; it is a personal story amplified. Solovitch suffered from a stage fright so debilitating that she stopped playing the piano at age nineteen, and played for no one for the next thirty-plus years. Her terror was — is — classic, like a bad dream, dry mouth, racing heart, hands so wet they slid off the keys.

The book is set in motion when she decides to see if she can return to playing the piano in front of others without panicking. In 2012, she impulsively schedules a solo recital for a year hence, the day before her sixtieth birthday.

Doing so, Solovitch, a longtime journalist, becomes not only a participant-observer but also an Underdog on a Quest. Will she succeed? Will she be able to perform in public for more than fifty people without her lifelong symptoms seizing up again?

Designing her own course of action, she goes to therapists, celebrated piano teachers, and summer music camp. She practices hypnosis, biofeedback, the Alexander technique, yoga, and mindfulness. She thinks hard about the effects of her supportive yet critical mother taking her to competitions. She takes beta-blockers — the secret of many orchestral musicians — which lower her blood pressure and slow down her breathing and adrenaline rush. She even tries affirmations and a tapping technique that makes her “feel like a dead tree in which a woodpecker had taken up residence.” A famous sports psychologist teaches her “centering,” a way of being focused yet relaxed. He tells her she is “overthinking” and needs to move into right-brain functioning. “I wondered aloud if I even had a right brain,” she says.

At some point, still terrified, she undertakes “exposure therapy” and begins playing in the San Jose Airport baggage claim area, which just happens to have a piano.

A scrupulous reporter, Solovitch talks with neuroscientists, therapists, and numerous performers and athletes who have had stage fright, gleaning from them how they worked it through — or, as cautionary tales, how they could not. You meet a famous child prodigy who was badgered relentlessly by her father, a man — profiled by Oliver Sacks — who became obsessed with the piano after being struck by lightning, and even a circus tightrope artist. Other people’s stories become sustenance for her, precisely what a reader might come away with too.

Solovitch seamlessly weaves her research with her own tale. Both reporter and scaredy-cat, she is an antic as well as serious narrator, able to laugh at herself. Of wearing a biofeedback device while practicing Bach, she writes, “The graph of my brain waves looked like an EEG… of someone who was having a heart attack.” On learning a new technique: “I had to find the hydraulics in my hands, flatten them like pancakes, and then raise them, elevator style, like an old Citroën automobile.”

Her chapters on the science and history of stage fright yield gems. One learns about that part of the brain, the amygdala, which operates with a mind of its own, about William James’s panic attacks, and that one British cultural theorist sees stage fright beginning with the introduction of electric lights in theaters in the late nineteenth century. Reaching into the past, she describes how the search for substances to curtail fear dates back to “ancient tribes on the Siberian steppes.”

Beyond research and beautiful descriptions of what it feels like to play music, is this book useful as well as interesting? Yes, in multiple ways, for Solovitch asks big questions. What does it take to master something? Can human beings change? Can one move beyond less than supportive parents or encounters with scarring teachers?

Her examination of perfectionism and how it stifles performance and creativity will speak to many readers. An equestrian unable to surmount her perfectionism, now instead training Olympic hopefuls, describes how she would ruminate on her mistakes “like a criminal returning to the scene of the crime.” “If you can’t try new things, you can’t get better,” she says. “An obsession with perfection stunts growth.”

Making a list of one’s ten most courageous moments, requested by a coach at Julliard, surely can be helpful for everyone. “If you look at that list, you’ll see what you are capable of,” he tells her.

And Solovitch’s progress? Deadline looming, she hosts a series of at-home evenings where she plays for friends — then stays up worrying afterwards about her mistakes. After several experiences, she notices that she is playing more fluidly and with more concentration. She begins to find a relationship with the music that is all hers, to experience playing from the inside. Does she triumph in the end? Read the book and find out.

Whether you share symptoms with Paul McCartney, Maria Callas, Ella Fitzgerald, Laurence Olivier, Vladimir Horowitz, and Constantin Stanislavski, or have hands that “shake like a hummingbird at a feeder,” or whether you know — or support — people who do, reading Playing Scared illuminates.

Irene Borger, director of The Herb Alpert Award in the Arts, is writing a book on listening.