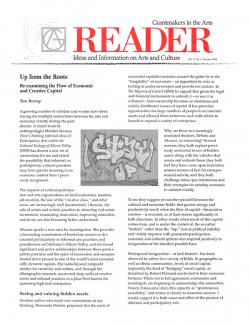 The annual conference of the International Funders of Indigenous Peoples (IFIP) met for two days at the Ford Foundation and the United Nations in May of 2006. In her opening remarks, Evelyn Arce-White, IFIP executive director, noted that it was rare to have funders, Indigenous Peoples, and NGOs together in the same room and that the value of such a meeting was not to be measured in financial terms but should be considered spiritual in nature. The spirit of this idea was evident throughout the conference. The presence of representatives of Indigenous communities and of staff from NGOs and grantees providing services in Indigenous communities worldwide offered opportunities for the direct exchange of ideas and a more personal engagement than many conferences.

Overall, the meeting carried an air of excitement and optimism, despite the many grave challenges to Indigenous Peoples that were reported. To some degree this was the result of the number of young representatives of NGOs whose enthusiasm to actually talk with funders was both palpable and well-received.

I came to this meeting having just attended a GIA board discussion on power dynamics in grantmaking. Although the phrase "power dynamic" was not used during this conference, the theme was voiced on numerous occasions.

Keynote speaker Phrang Roy of the International Fund for Agricultural Development reminded participants that "free, prior, and informed consent of Indigenous communities" must to be a key requirement of any funding that flows to those communities, and similarly, that Indigenous participation in the development of programs and the decision-making for allocating support is also critical to both the success of the grant(s) and the ongoing relationship of Indigenous People with funders.

The theme of power came up again during breakout sessions. In several parts of the world, funders support the work of environmental organizations whose work may include territory that is the traditional home of Indigenous communities. Although the broadest goals of some environmental efforts may be in concert with those of Indigenous Peoples — the protection of the land and resources — what each brings to the table and, more importantly, the values that inform how they proceed to reach these goals can differ widely. International environmental organizations often control significant resources, both real and perceived, that equate to power. The formation of an equitable partnership with Indigenous communities requires organizations to share control of both decision-making and resources in ways that many are not used to. It was suggested that funders who support environmental groups whose work includes Indigenous communities require those groups to have Indigenous representation on both their staff and boards.

One participant nicely turned the semantic table on the funders present. He noted, “We Indigenous People have to be careful and let go many of our cultural assumptions when dealing with American foundation people. It is important to understand their ways and customs and traditions. It is also important that we learn to be very patient.”

One session offered a telling story that illustrated the vulnerability of many small communities to the economic forces of the industrial world with a photo of a village beach on the Kamchatka Peninsula. The beach was littered with the carcasses of thousands of salmon that had been poached for their roe, presumably to be sold in Japan. Residents who witnessed the poachers later said that they arrived in Russian navy boats.

When you live in a village at the end of the world and your own government's navy brings in the poachers, who do you call? The army? Not that there are any phones in the village of Ust-Bolsheretsk, nor anyone who might answer that speaks your language. You are truly on your own.

Conference sessions also explored topics of food sovereignty, genetic modification of crops, and the challenges of conducting advocacy, among others. One session featured Indigenous “speed dating” where a dozen speakers presented five-minute reports on projects from all over the globe.

The afternoon session that closed the conference was held at the Permanent Forum for Indigenous Peoples at the United Nations. Questions and comments from the Forum delegates clearly indicated that U.S. foundations were not generally viewed as responsive to the needs of Indigenous Peoples worldwide. Sicangu Lakota elder, Rosalie Little Thunder noted, “I would remind everyone that when Indigenous people seek resources for solutions to problems that are the results of oppression, they seek the assistance from those who were also the source of their problems.”

We regularly hear from well-schooled, native English-speaking staff of U.S. nonprofits about the hoops they feel they have to jump through and the difficulties they face navigating the philanthropic world. It was sobering to hear how impenetrable the language and procedural barriers to U.S. philanthropic support appeared to the international Indigenous community.

Tommer Peterson is director of programs, Grantmakers in the Arts.