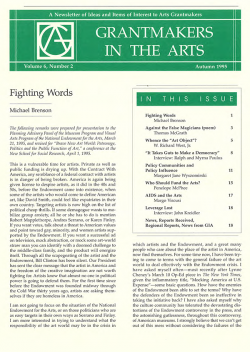 Leverage Lost: The Nonprofit Arts in the Post-Ford Era

An Interview with John Kreidler

Following are excerpts from an interview with John Kreidler (San Francisco Foundation) conducted by Kathleen Cerveny (Cleveland Foundation and CIA board). The paper that Kreidler discusses in the interview provides a background for his "Flight Simulator," a computer program designed to demonstrate the arts ecosystem. The "Simulator" will be available for hands-on experimentation at the upcoming GIA conference.

KC   John, as I understand it, the premise of your paper is that any attempt to understand or analyze the nonprofit arts world should be undertaken from a systems standpoint-the arts world is a complex system that has emerged organically over a period of time.

KC   You characterize the history of this system as having evolved through three distinct developmental stages: the pre-Ford era, roughly 1850 to 1957; the Ford era, 1957 to 1990; with the post-Ford era being the last five years. Few people would argue with the notion that the Ford Foundation, led by McNeil Lowry's vision, essentially created the system that has characterized arts grantmaking for nearly forty years. But Ford did not conceive of its own arts initiative as a permanent mechanism to fund the arts. Rather, the initiative was a tactic to create a much larger system of support for the arts-by leveraging the support of others.

JK   Yes. Ford advanced a remarkably well-conceived strategy to advance the nonprofit arts over twenty years with an investment of more than $400 million, though it never saw itself as a source of permanent subsidization for the arts. However, Ford's approach to institution building and leveraged grants helped fashion an unprecedented ecosystem of arts organizations supported by new and increased sources of private and governmental philanthropy that thrived for another two decades after the Ford Foundation's influence had peaked.

KC   Ford was trying to prime the pump.

JK   "Pump priming," "seed funding," and "funding leverage" were all popular concepts during the Ford era. The core notion was that a limited-time investment of funding would produce a multiplied return of earned and contributed income that would be sustainable long-term.

KC   From where we now stand, we can see this didn't happen, hence the title of your paper, "Leverage Lost."

JK   The mistake comes from the belief that the nonprofit arts ecosystem can grow indefinitely. Even in the "absence of the recent downturn in federal and state funding, it was inevitable that the arts would eventually face a stagnation in growth or an outright decline. A tenet of systems thinking now widely acknowledged by environmentalists is that upwardly spiraling growth is unsustainable. No system can rely forever on a "free lunch."

KC   As you call it, "the fatal flaw in the theory of leverage funding."

JK   Yes. But I'm not a critic of the Ford Foundation or others who advanced the concept of leveraging. It is my view that the amount, quality, and diversity of artistic production in the United States has vastly improved since the late 1950s. The problem today is that the resource base—both the money and, more importantly, the labor supply—is not adequate to maintain all that was created during the past four decades. As grantmakers, we can choose to ignore this reality or to acknowledge it. I believe we need to better understand the systemic underpinnings of today's nonprofit arts ecosystem so we can make grants that are effective in an era of changed circumstances. Leisure time, education, societal values, levels of prosperity, technology, and many other key trends have changed dramatically in recent years.

KC   Ford's purpose was to both increase the dollars available to the arts and also to increase the supply of artists. I was interested in the comments you make about how the labor of the artist is leveraged in the current system, and how that leverage is also being lost.

JK   Without the huge supply of low-priced labor that became available in the 60s and 70s,it is doubtful that the arts would have flourished even with the heavy investments being made in the system. Historically, most arts groups began without grant funding. The liberal-artseducated college graduates of the '60s and '70s generation felt compelled to make art regardless of the lack of financial reward. Certain visionary artists became magnets for other artists, administrators, and technicians who wanted to be part of producing art. This new supply of labor was supported by a lower cost of living, part-time jobs in nonarts occupations, shared living accommodations, and the willingness of youth to endure poverty. Grant income and low-cost labor were on similar trajectories of pyramidal growth.

Grantmakers and artists were increasing the supply of art with the assumption that public demand would eventually catch up with the supply, thereby achieving an equilibrium of supply and demand that could be sustained. Indeed, some evidence indicates that during the Ford era public demand increased. But recently, demand has begun to erode-especially in the performing arts. In addition, the environment surrounding the nonprofit arts sector has been altered by powerful societal and economic forces. Given this landscape, I think grantmakers must ask ourselves whether it is responsible to encourage further growth in supply Indeed, we should also ask whether stabilization, that is, maintenance of organizations without further growth, is justifiable as a general strategy.

KC   You make the point that, rather than trying to sustain the current system, the survival strategy for the arts now is creative adaptability and anticipating alternative futures.

JK   Yes. My sense is that survival will be a matter of making complex and idiosyncratic adjustments to a complex and ever-shifting ecosystem. I am very suspicious of any simple and singular approach, such as focusing just on better boards of directors, enhanced marketing, or stronger capitalization.

What I hear many grantmakers talking about is merger and sharing. But I don't see that being successful very often because so much of making art is idiosyncratic. One artist's vision is not another artist's vision, and putting them together just isn't going to work. The main phenomenon I see in San Francisco is the preservation of production capability by shedding fixed costs: eliminating long-term and year-round commitments to staff, rent contracts, etc. More resources, both labor and funding, can then be focused on one production at a time, rather than supporting a fifty-two week operation.

KC   As I see it, John, one of your purposes in writing "Leverage Lost" is to further a dialogue about how the nonprofit art world operates, what defines the system, how we can learn from the past and present, and maybe how we can acquire some wisdom about the future.

KC   In addition to the paper, you've created a tool people can use to test their learning and try to project alternative futures—a "Flight Simulator" computer program that grantmakers can "test fly" at the October conference.

JK   What I've done is create two non-linear models—a fictitious theater company and a hypothetical arts environment in a metropolitan area—with six or seven variables that can be manipulated by the "pilot." People can play on the micro level or the macro level. The simulations are not meant to give insights into actual future directions of the nonprofit arts ecosystem, but I am hopeful they will provide an easy and fun way to test possible strategies and gain an appreciation for the complex behavior of organic systems.

KC   So, to push for a systems outlook, what advice would you give?

JK   Regardless of whether we work locally, regionally, or nationally, our first priority should be to thoroughly understand the system within which we're workingin all its complexities. Without that, there's a very good chance that our interventions will do more harm than good.

If nothing else came from this paper but a debate about how the arts ecosystem has evolved—even if my view of it was dismissed—that would be OK. We'd be further along. We need to stand back and understand the system.

KC   One final question. Has your understanding of the history of the nonprofit arts world made a difference in the grantmaking at the San Francisco Foundation?

JK   Yes it has. Some time ago, I shared an early version of my paper with our board, whose members have a great passion for the arts. We recognized that the San Francisco Foundation does not have the resources—maybe no one has the resources—to reverse the trends or even influence the system. Clearly, building up organizations is a questionable idea right now, and maybe even sustaining or maintaining them might do more harm than good. We might be keeping organizations from evolving or adapting naturally to the changed environment. The Foundation is now much less active in initiating small, new groups, and is shifting its support more to performing arts presenters and intermediary groups that can help artists continue to produce their work without the need to create complete organizational structures. In addition, we are increasingly interested in arts that emerge from the community and that have a much broader appeal. As a consequence, we are diverting some funds into participatory activities-parades, festivals, and community cultural events. We recognize that broad appeal for the arts, envisioned by grantmakers during the stimulating growth era of support from the Ford Foundation and the NEA, has not, in fact, materialized.

Kreidler's paper, "Leverage Lost: The Nonprofit Arts in the Post-Ford Era," was distributed to all attendees of the 1995 GIA conference.