Elizabeth Streb: How to Become an Extreme Action Hero 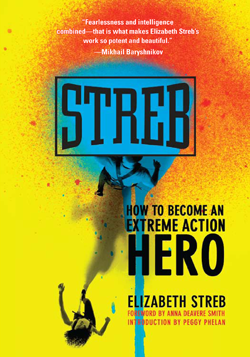 2010, 202 pages, The Feminist Press at the City University of New York

Mix two parts choreographer with two parts daredevil, then season well with science and philosophy, and you’ll have the recipe for Elizabeth Streb’s new book, How to Become an Extreme Action Hero.

For more than two decades, choreographer Elizabeth Streb has been pushing the limits of the human body with the development of her movement technique, PopAction. “That name,” writes Streb, “comes from how we describe what it is that initiates a move. We say we pop our muscle groups, which then drag our skeletons around the stage.” Her dancers are Extreme Action Specialists who present “action as subject, not body as object.”

Streb guides us through her philosophy and approach to creating work, including the Streb Lab of Action Mechanics (SLAM), where large contraptions are built for motion and gravity-defying movement. Repeatedly, Streb challenges the traditional concepts of dance, such as narrative to music, or ballet pointe as a signifier of lightness and being airborne. Streb would rather fly—launching herself and her specialists off ledges, climbing vertical walls, spinning in an antigravity device.

The book’s five core chapters explore Streb’s creative process: Body, Space, Time, Motion, and the Real Move. Certainly if you’ve seen Streb’s work, you understand that it’s far beyond the vocabulary of contemporary dance. She is using concepts from physics and philosophy to explain movement and her quest for the real move. She explains that “a real move has the power and depth to create a movement archetype. These archetypes are made up of motion first, rhythm second, and image third. They exist as powerfully as narrative or aural archetypes do, but they currently go unnoticed.”

Streb’s passion is contagious, and it was hard to put this book down once I started reading. Like those who have inspired her — including Evel Knievel and Harry Houdini — there is something spellbinding in Streb’s work and in her description of it.

John E. McGuirk is director of the Performing Arts Program at the William and Flora Hewlett Foundation.