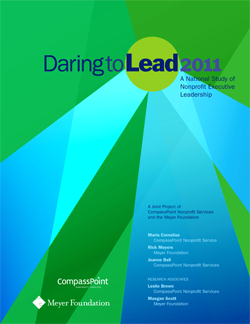 Daring to Lead 2011, a new national study of nonprofit executive directors conducted in the aftermath of the deepest economic recession in decades, reports that a significant number of executives plan to leave their jobs within the next five years, citing frustration with their organizations’ shaky finances, under-performing boards of directors, and the difficulty of maintaining healthy work-life balance in their demanding roles.

The study was conducted by San Francisco-based CompassPoint Nonprofit Services and the Meyer Foundation in Washington, DC. More than 3,000 executive directors responded to an online survey that asked executives about their career paths, likely tenure, their partnership with the board of directors, and the impact of the recession on their organizations. Meyer, CompassPoint, and other partner organizations—including foundations and management support organizations—distributed the survey to executive directors in eleven regions throughout the U.S. To supplement the survey, 70 executives participated in focus groups in San Francisco and Washington.

Daring to Lead 2011 is a follow-up to similar studies conducted in 2006 (see report here) and 2001, in which three out of four executives said they planned to leave their jobs within five years. The number of respondents who said they were leaving in this study—67%—is somewhat lower than in the two previous studies, with executives’ responses suggesting that the recession may have temporarily slowed executive departures. Nevertheless, a large majority of respondents continue to anticipate their departure within five years, making executive turnover and transition a significant ongoing concern for nonprofits, their boards, and other stakeholders.