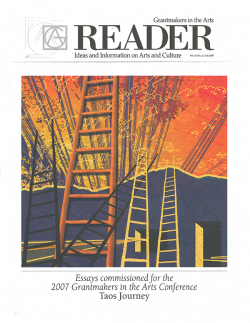 Another project underway for historian Jim Smith, author of the preceding “A Profession of Philanthropy,” is a new piece, commissioned by the Aspen Institute, that examines the ways that foundation giving to arts and culture is fundamentally different from giving to other fields. We coaxed Jim to contribute a brief preview of this line of inquiry. Excerpts from this nascent work in progress have been woven together by Jim and Anne Focke into this brief, provocative piece.

Why have foundation interventions in the cultural realm seemed different from their work in scientific or medical research, public health, education, and welfare? Why was it so hard, early on, for culture to gain traction inside the large foundations?

America's largest foundations arrived late on the cultural scene. When the major philanthropic enterprises of Rockefeller, Carnegie, Sage, Harkness, and Rosenwald got underway in the decades around 1900, their principal focus was on medicine, public health, education, and social science research. Only in the 1920s with foundations well-established did some foundation leaders begin to ponder their absence from the cultural arena. The head of the Rockefeller Foundation's Division of Studies, Edwin R. Embree, asked plaintively: “Of what good is it to keep people alive and healthy if their lives are not to be touched increasingly with something of beauty?”

To understand the cultural role of the large foundations we must ask a simple question at the outset: Why the neglect? What inhibited the major foundations in their support of arts and culture in the early decades of the twentieth century? The most obvious answer is that large general-purpose foundations represented a self-conscious institutional and intellectual break with past charitable practices. The founders and the professionals they hired famously described their work as “scientific philanthropy,” seeing their role as a search for the “root causes” of social problems. They often described their philanthropy as “wholesale” rather than “retail” giving.

They were explicit in rejecting older notions of charity that had aimed only at the temporary amelioration of human suffering. Traditional charity, they felt, had made little headway in analyzing or solving systemic social ills. Consequently, they focused on building research institutions and bolstering academic training in professional domains ranging from medicine to social work. To many turn-of-the-century foundation donors, cultural giving and arts patronage were old hat. The realms of arts and culture thus remained marginal to the interests of the new general-purpose foundations.

Cultural giving followed a different trajectory. It is a story that has not been well integrated into the broader history of American philanthropy. In many respects, it is an older story that begins several decades before Carnegie, Rockefeller, and Sage organized their large-scale philanthropies. Well before the invention of the modern foundation, wealthy and many not-so-wealthy middle-class Americans were already hard at work establishing museums, libraries, symphonies, and opera companies.

A distinctive pattern of cultural philanthropy began to take shape in the decade or so after the Civil War. Urban elites undertook projects for civic bettermentmuseums, libraries, botanical gardens, parks, and war memorials. They enlisted their peers, engineered broad-based public fundraising campaigns, and often turned to municipal governments for help. Although the precise forms varied from place to place, public-private partnerships were common, with city governments donating a building site or agreeing to pay specific operating costs.

The best known cultural donorsBoston's Henry Higginson and Isabella Stewart Gardner; New York's J. P. Morgan, Henry Frick, and Augustus Juilliard; California's Henry Huntington; Rochester's George Eastman; Philadelphia's Mary Louis Curtis Bok; Chicago and Washington's Elizabeth Sprague Coolidge, among many otherswere different from those who organized their endeavors through general-purpose foundations. Although some worked with curators and advisers, these art collectors and music lovers were typically more knowledgeable about their fields than those interested in scientific or medical research. More importantly, the kinds of assets they often devoted to their institutionscollections of art and the homes or museums that housed themled them to pursue very discrete philanthropic goals, if indeed their goals can be described as “philanthropic” in the ways many of their contemporaries were beginning to use the word.

Cultural giving was robust but it was not at all the “scientific philanthropy” or “wholesale giving” described by John D. Rockefeller, Sr., and other great donors. Cultural projects were conceived in different contexts: Sometimes they were civic endeavors, involving city governments and a broad community of donors; sometimes they were an individual's obsession to create a museum, thus sharing privately acquired art collections with the public; sometimes they were well-funded operating entities such as conservatories or art schools.

Yet another difference looms large and is sometimes forgotten. While the cultural institutions that were created in the late nineteenth and early twentieth century relied on generous gifts of money, art-work, and volunteer labor, they were founded within a larger cultural economya commercial cultural economy.

American culturewhether P. T. Barnum's thriving museums or Jenny Lind's wildly popular tourshas long had a market orientation. In the late nineteenth century, orchestras, opera companies, and touring theatrical groups (an estimated four hundred commercial theater companies toured the nation in the mid-1890s) were all organized on a commercial basis. Organizers and promotersprominent orchestra conductors, famous singers, and leading actors among themassumed the financial risks, hoping to profit while expecting little or no philanthropic subsidy for their endeavors.

Commerce and philanthropy interacted then, as they do now. Many cultural patrons understood their role as shareholders in cultural real estate venturesthus, the Metropolitan Opera and Real Estate Companyor as guarantors of debts willing to step in, often reluctantly, to cover annual operating deficits. Andrew Carnegie was not alone in concluding that his New York performance hall should be a rental hall in which orchestras and others would pay their way. He insisted bluntly that “the greatest patronage of music should come from a paying public rather than from private endowment.”

The American cultural economy and the patronage that operates within it has always been complex. Culture has rarely been viewed as what economists term a “public good.” Rather, it is considered a hybrid, providing a mix of private and public benefits. Individuals who are willing to pay to attend an opera or visit a museum derive the direct benefit. Whatever public benefit results is more diffuse, its importance difficult to articulate and not as easy to value in dollars.

From the beginning, foundation funding for culture faced a conceptual obstaclean obstacle grounded in the assumption that cultural activities should always try to pay their own way. For Higginson, Carnegie, and many other donors, tickets and gifts were both forms of patronage. Thus, American cultural institutions have never been able to turn their backs on the marketplace. Culture has been treated less as a public good than as what economists term a “merit good.” A merit good is one that can be supplied to some extent, often to a very large extent, by the market because some individuals, presumably with good taste and discernment, are willing to pay for them. They are willing to buy tickets to the opera and ballet and to pay admissions fees to museums or to purchase DVDs and watch films. Unlike public goods, merit goods provide the ticket-buyers and performance-attenders something they desire, something that offers them exclusive private pleasures. But while providing obvious private benefits, merit goods are also deemed to generate certain social benefits that will spill over to benefit others.

Merit goods prompt many questions, most of them arising from this inextricable mix of public and private benefits. It is this melding of benefits that remains at the nettlesome core of our perennial debates about cultureand our continuing uncertainties about foundation and government roles in supporting it. Americans have not yet decided emphatically that culture is a pure public good. Thus, they have limited government's cultural role, while preferring a more substantial role for the private sector.

But markets fail and it has never been entirely clear what market failure means in the cultural sector. By what criteria should the adequacy or inadequacy of the supply of a merit good be judged? What is the nature of the wider public benefits that cultural investments can provide? Is public benefit grounded in social and economic utility or can it be conceived in essentially aesthetic terms? How are culture's public benefits to be valued? And how should access to merit goods for those who cannot pay be expanded and allocated? Neither the market nor democratic decision-making processes provide ready solutions to such fundamental and perennially unanswered cultural questions as these: Who should pay? For what? And how much?

In the end, it is the role of foundations to keep these questions alive, to refine and clarify them, to offer persuasive evidence about both private and public benefit, and to supply answers, however tentative, about the role of culture in our lives.

James Allen Smith is a historian and former GIA board member who has written on public policy, philanthropy, civil society, and American cultural policy. He holds the Waldemar A. Nielsen Chair in Philanthropy and currently teaches in the Georgetown Public Policy Institute. Prior to joining the Georgetown faculty he served as senior adviser to the president of the J. Paul Getty Trust. He was the first executive director of the Howard Gilman Foundation, a post he held from 1991 to 1999. In 1993 he helped establish the Center for Arts and Culture, a Washington-based cultural policy research center, and he was president of the center's board of directors from 1993 to 2001. He has also taught medieval history at Brown University, Smith College, and the University of Nebraska.

This article is based on excerpts from Smith's paper on foundations and the cultural sector, which was commissioned as part of an Aspen Institute project, “The Contributions of Foundations.” The overall project, which examines foundation work in a variety of fields, is directed by Helmut Anheier and David Hammack. Two volumes emanating from the project will appear late next year.