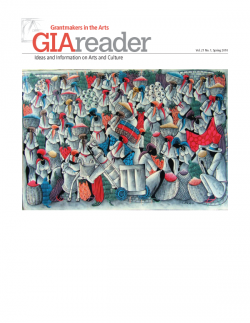 The Collaborative Habit: Life Lessons for Working Together

In 1993 playwright Tony Kushner wrote an essay about the relational nature of artmaking vis-à-vis the notion of the great artist. “Way down close to the bottom of the list of the evils Individualism visits on our culture is the fact that in the modern era it isn’t enough to write; you must also be a Writer, and play your part as the protagonist in a cautionary narrative in which you will fail or triumph…. You pretend to play it solo, preserving the myth that you alone are the wellspring of your creativity.” 1

For a long time, perhaps, this was the American way. The great journalist Oriana Fallaci once pushed Henry Kissinger to explain his popularity. His response enraged Richard Nixon and led Kissinger to describe the encounter as the most disastrous conversation he ever had with any member of the press. “I’ve always acted alone,” he said. “…Americans like the cowboy who leads the wagon train by riding ahead alone on his horse, the cowboy who rides all alone into the town, the village, with his horse and nothing else…. This amazing, romantic character suits me precisely because to be alone has always been part of my style or, if you like, my technique.” 2

Now, in this time of Barack Obama, whose rise to power is based, in no small part, on lateral social networking and organizing, is the myth of the hero or lone genius ready to shift?

The articulate, witty, and protean choreographer Twyla Tharp, long considered the prime protagonist and wellspring of her oeuvre, has just published, The Collaborative Habit: Life Lessons for Working Together. The author of one vibrant memoir, Push Comes to Shove, and The Creative Habit, a useful volume about getting down to work, replete with checklists and exercises, Tharp has decades of experience partnering with numerous gifted people including Richard Avedon, Milos Forman, David Byrne, Elvis Costello, and Mikhail Baryshnikov. She calls the new book a “field guide,” (actually, they call it a field guide as it’s authored with journalist Jesse Kornbluth3) and while it’s hard to imagine The Collaborative Habit being used as a field guide — a practical go-to book for solving problems it’s not — the work is peppered with key Tharpian values to consider before venturing forth:

“A clearly stated and consciously shared purpose is the foundation of great collaborations.”

“A great partnership is a lab where change happens every day.”

“Before I start any collaboration, I list exactly what resources I’ll require to do the job and then try to find out if the institution is prepared to provide them.”

“The ultimate best result of any collaboration is learning to look through your collaborator’s eye.”

“Because collaboration isn’t some airy concept but a practice that’s found only in our daily reality, I’ll be light on ideas and heavy on stories,” Tharp writes, and the book reads like a memoir, with behind-the-scene tales. Who knew that before Tharp worked with the Pacific Northwest Ballet, she was thinking about meaning in dance — and life — aided by Leo Tolstoy’s What Is Art? Or that one reason she still trains “religiously” is to be able to continue showing dancers the movement on her own body? Or that her fear of working with her friend Jerome Robbins, and moving through that fear, led to invaluable insights. “I learned there is no ownership in a successful collaboration.”

The book is revealing and, in that way, truthful, and generous. Her description of Avedon is, in fact, a portrait of herself: “He was wildly prepared, in total control, up for any preplanned adventure. In the studio, he was intense. He had limitless energy and he threw that into a photo session — there was no downtime when you were working with him.”

The Collaborative Habit addresses the challenge of partnerships; collaborating with institutions; with friends; with geographically remote work mates; with communities; and why collaboration matters. Tharp includes short profiles of the Wright Brothers, Marie and Pierre Curie, and even Captain Chesley Sullenberger, who landed the passenger jet on the Hudson River last year, and acknowledged his first officer and crew as an integral part of his team. While it’s clear the authors hope to be read by a broad public, the work remains rooted in the arts. It would make a lively case study in an academic course on the subject.

For the last couple of years in my work with the Alpert Awards, several nominators have wanted to recommend teams (and not individuals, as requested) because they felt that the most interesting work was being made collaboratively. Is this true? If so, why now? What might be leading to this change? Two theater artists I greatly respect recently hypothesized that with the lack of institutional support, more and more art makers are turning to one another to challenge themselves, to make community, and, in short, to be able to work. While Tharp’s framework — and level of success — may keep her from examining these questions, she hauntingly demonstrates the way collaboration can transform a life. In her last book, she described her daily routine of hailing a cab to go to the gym, “muttering the address” to the taxi driver. Now, after six collaborations, she tells us they actually talk. “Because of my experience, I’m willing to engage with the world.”

Consider The Collaborative Habit as a small offering in shaking the myth of the lone genius.

Irene Borger is director of the Alpert Award in the Arts.

1. Tony Kushner, “With a Little Help from My Friends: Essays, a Play, Two Poems, and a Prayer,” in Thinking about the Longstanding Problems of Virtue and Happiness, Theatre Communications Group, 1995
2. Oriana Fallaci, Interview with History, Houghton Mifflin Harcourt, 1977
3. See Kornbluth on their work process; what a pleasure it was; how hard she worked; how he essentially acted as editor and Tharp the writer. “Writing with Twyla Tharp: I Collaborated With a Genius — And Survived.” http://www.huffingtonpost.com/jesse-kornbluth/writing-with-twyla-tharp_b_368947.html.